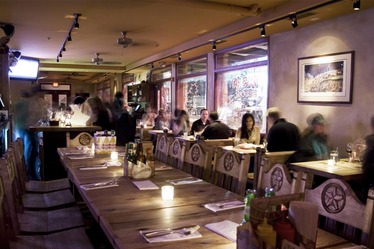 What a difference a day makes. OK, more like a decade, but the Northern Liberties section just south of Girard Avenue and between Second and Third streets used to be a desolate wasteland, hosting just a vinyl-flooring company and a bunch of dilapidated houses. I know because I used to work at the nearby horse barn, which disseminated the lovely scent of hay and oats and the resulting horse manure. But no more: The horse barn has moved to a bigger location by the Schuylkill River and Northern Liberties has become an upscale hot spot with enough boutiques, galleries and restaurants to warrant a mention in the New York Times. One of the newest additions to the area is El Camino Real [“RAY-al”], 1040 N. Second St. — a Texas-Mexico border “cowboy bar” with a turn-of-the-last-century feel and authentic cuisine drawn from El Paso, Texas, and Juarez, Mexico.

The menu is comprised of two sections, representing foods from Mexico and Texas. Chef Jennifer Zavala and owner Owen Kamihira traveled to Mexico to make sure the recipes and ingredients used at El Camino Real were the real deal. Zavala stays true to the style and her own Mexican heritage on that side of the menu.

I was partial to the Mexican food, so we started with the “little burros” burritos. For $9-$11, you get a choice of two handmade tortillas stuffed with your filling of choice. If you’re a bit adventurous, which I am, you can try something like the cactus and potato burrito ($9). The cactus was grilled until it was soft (cactus can be tough if not prepared correctly), but with a satisfying crunchy coating that went well with the potato. It had a bit of a kick to it (keeping in mind that I’m a weenie when it comes to hot stuff) but was not overpowering. If you’re really adventurous, which apparently I’m not, you can try more exotic offerings like the lengua burrito, which is ox tongue. My waiter was crazy about it and praised it as a melt-in-your-mouth dish, but I just can’t get over the idea of French kissing Elsie by way of burrito. He did make it sound good enough for me to consider, so if you go and you are game, it sounded heavenly.

My dining companion was going for basic Mexican and ordered the steak burrito ($11). This side of the menu is inspired by foods of Northern Mexico, which employs a very minimalist style of cooking. The ingredients are fresh and sparse, leaving you to enjoy the key ingredient instead of dressing slathered on top of it. The steak burrito was served simply with onions and a bit of cilantro and a choice cut of steak, accompanied by salsa, cabbage and a wedge of lime.

I opted for the chile rellenos ($10). I’m pretty good with my Spanish, but darned if I can say rellenos and get it to come out right. Fortunately I got my order across well enough for my patient waiter to understand. The dish is comprised of a long chile roasted and stuffed with seitan, plantains, portabellos and cheese. The chile is breaded and fried and served atop black beans with salsa verde sprinkled with scallions and a few radish slices for color.

Traveling to the Texas side of the menu, I tried one of the “looseys” ($3), a single pork rib with the barbeque sauce on the side. If I wasn’t such a lady, I might have ordered a few extra of these to stick in my bag. Kamihira and Zavala also included Texas on their excursion for authentic flavors, and I’m told by folks who hail from the area that it’s the real deal. Whatever they did, these ribs were succulent and tasty with the right amount of char. They were so good, I almost forgave Texas for George Bush … almost.

I also tried the fried pickle chips ($7), which I found to be too briny. The chile mayo that accompanied them was good, though.

A good portion of the food is made on the premises, from the tortillas, which are made to order, to the ice cream, which comes in some unusual flavors. Zavala, a tiny tattooed rocker (she spent time traveling with Ozzfest as a rock ’n’ roll chef before coming to El Camino Real), takes a lot of pride in the authenticity and variety of the menu. “We spent a lot of time traveling through small towns with the top down and our bellies full doing research. The simplicity of the food was really surprising. I got a kick out of hanging with the older Mexican women and watching them cook. They didn’t use much, but when it hit my palate it was awesome. I want to start incorporating more fish dishes into the menu and expand our vegetarian offerings. I’ve received a lot of good feedback about the vegetarian stuff we have in the menu, so I hope to add more. I try to be considerate of everyone. Especially since Mexican food has so much flavor, I can offer health-conscious food that still has taste people can enjoy.”

For dessert, I opted for the bourbon pecan pie ($7). A thin, round piecrust was delicately placed on top of fresh whipped cream with a pancake of pecan pie, topped with homemade sweet-potato-pie ice cream. A sprig of mint added to the flavor and color. The pie and ice cream were very subtle in flavor, which is good for those of us who get tired of oversweet, syrupy desserts.

My dinner companion ordered the s’mores bread pudding ($7). This is what camping should be about: cute little chocolate kisses strewn on the plate with the bread pudding, which had the consistency of a really moist brownie, sitting atop two graham crackers and topped with marshmallow ice cream.

As a second dessert, I tried the Push Pop from the specialty-cocktails menu (a very reasonable $6), made with Stoli vanilla vodka with coconut, blood orange and Cointreau. Que bueno!

El Camino is decorated with a southwestern flair with low lights and a casual cowboy atmosphere. Artist “Prairie Dog” Phil Wax made cowboy paintings to adorn the walls and Joe Brenman created a wooden Virgin of Guadalupe to sit inside a galvanized bathtub, with the focal point at the bar being an 8-foot longhorn skull carved from a pine tree by artist Murf Sherman. “For El Camino Real, I was inspired by my trip down South,” Kamihira said, “and I wanted to capture that dusty desert feeling. I wanted to bring that desolate, almost-mythic environment to Philadelphia.”

Happy hours at El Camino are jumping with half-price margaritas and a variety of beers and tequilas. On the beer side, you can choose a 16-ounce can of Pabst for $3, a bottle of Red Pig or O’Fallon smoked porter for $5 or a pitcher of Dos Equis XX for $15. Tequilas run $4 for a shot of Juarez to $20 for 1942 Don Julio.

For night owls, there are late-night margarita specials. Only open for a month, the restaurant is still coming up with new ideas. During the summer months, the owner will provide outdoor seating and he and the chef are toying with the idea of a special outdoor burrito bar and perhaps a margarita bar. Ole!

Here’s a little trivia from Wikipedia: The word burrito means “little donkey” in Spanish, coming from burro, which means “donkey.” The name burrito possibly derives from the appearance of a rolled-up wheat tortilla, which vaguely resembles the rear of its namesake animal, or from bedrolls and packs that donkeys carried.

Don’t say I never taught you anything … 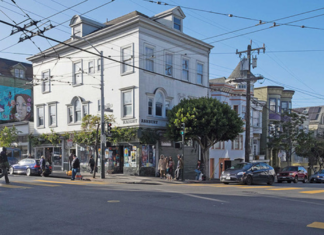