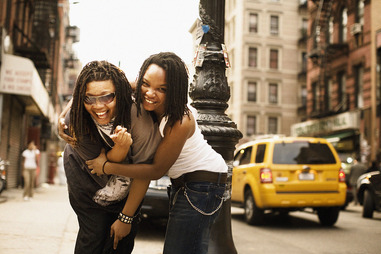 If any gay or lesbian group can break the sexuality barrier that exists in hip-hop, it’s Yo Majesty.

Since forming in 2001, the Florida-based lesbian rap duo has been known to bring the house down on more than a number of occasions, whether it’s in a sweaty club or on a festival stage. Their forward-reaching sound, which mixes hip-hop, rock and electronic influences, along with the fiery MC skills of Shunda K and Jwl B (who has been known to rock a show topless from time to time), have won fans all over the world.

Now, with a new album to promote, 2008’s “Futuristically Speaking … Never Be Afraid,” and a world tour ahead of them, there is no sign of the duo slowing down.

It is the best of all worlds for Shunda K, who juggles her Yo Majesty duties with a number of solo projects. She said as a solo artist she is able to sidestep the duo’s more overtly sexual vibe and tackle more weighty issues.

“I’m definitely more political and militant” in the solo work, she said. “It’s more serious, not that Yo Majesty isn’t. I talk about things like courage, integrity and male-female relationships. I’m able to talk about and teach men how to love their wives, women how to respect their husbands and children how to respect their parents. I get into things like that with Shunda K. It’s more intimate and more me removing myself out of the picture and the focus on my lifestyle and who I’m loving. I’m teaching the people different principles and morals that we should live by in order to have a happy life and be as one, one nation under God, all seven continents, you know.”

Shunda K also performs under a Christian rap alter ego, an artistic endeavor that started when she was in a heterosexual relationship and recording for a Christian label in Gainesville, Fla.

“The name I used that time was D.A.T. G.I.R.L.,” she said. “That stands for Divinely Attributed To God In Real Life. That’s another artist name that I go by when I have events here in the community where I’m going to be attracting families. I need to make sure that my music is family-friendly and Shunda K can be a little graphic and too explicit for a family environment. The music I do with that artist is completely spiritual music. I wouldn’t say it’s Christian, but it’s definitely spiritual where you can definitely know that I fear God and I love Jesus Christ, and that’s who I have a relationship with.”

It may seem odd that a Christian label would have an openly gay artist, but Shunda K said the label’s financial dealings were more of an issue than her sexuality.

“At the time I wasn’t dealing with women,” she said. “I was married to their nephew. The only kind of conflict I had with these people was the fact that here you say you’re representing God and when I go and ask you a question about the contracts you’re throwing in my face, you tell me that I have to go find out just like you did. I haven’t got a dime from that album and I know they have been selling it.”

Shunda K admitted that her marriage and the music she was recording at the time were attempts to live and promote a lifestyle that her family was pressuring her to live.

“I wasn’t loving me,” she said. “I was trying to please everybody else. My family, they’re very religious. All the time I’m hearing, ’Shunda, you ain’t living right, girl.’ Prior to me leaving the lifestyle, I said, ‘OK, let me do the right thing so I can go to Heaven,’ according to what religion says. In those two years that I was in this relationship, I had an opportunity to get to know who the Lord is and really know for myself and develop a relationship instead of me feeling like the only way to get a prayer through to God is to let my grandmother pray for me.”

Today, Shunda K has found satisfaction and an artistic balance between the different sides of her personality.

“It’s all me,” she said of her various music projects. “It’s just different. It’s how I would approach certain situations. I just have a strong relationship with God. Then on the other hand, I’m political. Then on the other hand, I’m gay. I cuss and I smoke. So I have to be able to separate those things so that what I am trying to do all for the glory of God won’t be misspoken of. I’m not trying to justify anything. I’m just trying to keep it separated to a point when nobody gets confused and starts questioning my integrity. It’s been working to the point where I’m starting to get offers to come and perform in churches. I wonder if these people, when they’re contacting me, have done their research. Do you read what I have on my page as far as who I am and my sexuality? I believe in being honest with people. When you’re honest, you give the people you’re being honest with the opportunity to make up their own minds. When you lie to a person, you’re pretty much making up their mind for them. I like to just put it all out and let people know up front who I am, what I represent and how I get down.”

Larry Nichols can be reached at [email protected]>..