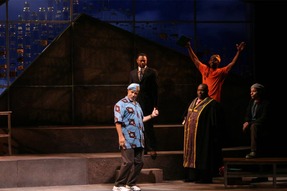 Do those two words sound familiar?

They should. They have been introduced, co-opted, bandied about and relentlessly drilled into the nation’s collective subconscious for the last two years. Those words are still on the mind of anyone keeping an eye on the newly sworn-in President Barack Obama.

Hope, change and Obama are definitely on the mind of openly gay playwright, actor, singer and composer Daniel Beaty, whose latest play, “Resurrection,” opens today at the Suzanne Roberts Theatre. He began writing the play in July 2007, when Obama’s campaign was really beginning to gather steam.

“One of the books that was the main inspiration for ‘Resurrection’ is called ‘The Urban League’s State of Black America 2007 Report,’ Beaty said of his play’s connection to the new president. “The subtitle was ‘Portrait of a Black Male.’ Barack Obama actually wrote the forward for that book in which he talks about the success and the challenges facing black men in America. The book was a series of essays on a variety of topics ranging from education to health and family relationships. That’s a lot of the subjects I explore in the play.”

Beaty said that while the play wasn’t planned to coincide with the ascendancy of the first black president, it can only benefit from the dialogue generated by such a historic event.

“Barack Obama: he’s being called the first black president,” Beaty said. “The reality is he’s biracial. He represents a coming together. His whole message is: How can we all come together to address what our nation needs? I think his inauguration [represents] a new energy of hope and possibility in the world. My work is also about hope and possibility. I think also when there is a Barack Obama who is such an example of inspiration and success, it’s important to remember the segment of society that is disenfranchised or struggling. It becomes even more important to remember them.”

“Resurrection” is the story of five men, ages 20-60, from one community. Each enters the play more or less as a stereotype rather than a dynamic character: There’s the college-bound success story from the projects, the fiery religious leader, the ex-con, etc. Over the course of the play, the men become multi-dimensional as their lives are transformed by a 10-year-old boy.

“I have a philosophy that children are always watching,” Beaty said of the importance of the child’s character. “All of the men in the play are a part of a connected community and this little boy is watching all of them, whether they realize it or not. He sees the problems that they are having and he wants to help solve each problem. So he comes up with a special herbal tea that he thinks he can solve the problems with. As he grows older throughout the play and as he matures, he begins to discover that it’s more complicated than that.”

Beaty said the play examines what it means to be a black man in America today.

“The idea was to show a community that spans different generations and ages,” he said. “I believe that if we’re going to address a lot of the issues facing the community, it has to be a collective effort. I include all different types — education levels, body types, complexion, sexuality, income — because I believe we all have to sit at the table together to make things shift.”

Beaty’s effort includes a gay character in “Resurrection,” 40-year-old Isaac (Alvin Keith), who is struggling with issues of identity.

“He’s actually the Bishop’s son,” the playwright said. “He’s a corporate executive for a music company. He’s on the down-low, but he’s been in a relationship with a man for two years. One of the main issues in the play is, can he be his father’s perfect son and come out to his father about his sexuality? The father’s issue is sort of being the bishop of this black church and his religious beliefs about his sexuality. So one of the journeys in the play is how these two people can coexist.”

Beaty said Isaac’s journey isn’t necessarily based on his own experiences as a gay man.

“I always say that my work is emotionally autobiographical but not literally,” he said. “I find that somehow every single one of the characters has a place where I connect to the character. I am open about my sexuality. This particular experience, I’ve never been on the down-low. I definitely am writing from the experience of a child that wanted to be accepted and understood. I know the experience of wanting to be fully expressed and the self-imposed limitations, and the limitations from other people. I try to be very specific with the characters and their journeys because I think that’s the way an audience can be most moved.

“At the same time, I try to make the concepts they’re dealing with universal. One of my big goals is that the audience that would come to the show, who might be homophobic, that this character’s story is personal and human to such a degree that they would discover something and open up in a way that they hadn’t expected.”

Given the amount of focus on homophobia in the black community and the black church in the last year, Beaty said he has been using “Resurrection” as a way to start a dialogue on that issue.

“It’s addressed largely through the relationship between the father and son,” he said. “He’s a bishop of a church that would be considered conservative. He’s got a gay son whose life is completely challenged by the fear that his father will not accept him. That’s a conversation that I’m intensely bringing to the forefront of this play. The son’s quality of life is being sacrificed in the highest way by his not being included and not feeling safe to be who he truly is. I show that consequence as a way to bring up the conversation.”

Beaty added that beyond the contextual conversation, the play has also served as a direct way to initiate the conversation about homophobia in the black church by holding panel discussions at performances with one planned for Philadelphia.

“We had 100 religious leaders from the community see the show and they had a discussion afterward,” he said. “One of the pastors committed to bringing 100 people from his congregation. One of the things he said was he felt the church was failing if people have to stifle who they are and can’t feel accepted and loved by the church. I’m definitely not attacking the church in this way, but I’m definitely bringing the conversation to the forefront.”

Bringing a message to the masses is something Beaty has done often. He has performed before audiences in the U.S., Europe and Africa in a variety of styles, ranging from television and solo concerts to theatrical productions and opera. Before “Resurrection,” his one-man play “Emergence-SEE!” won him critical praise and awards, including an Obie Award for Excellence in Off-Broadway Theater for Writing and Performing.

When it comes to presenting his work to international audiences, Beaty said it is surprising how well his productions, which center around the African-American experience, translate to audiences despite cultural and language barriers.

“I find in the U.S., the audiences are very responsive,” he said. “I use a lot of humor in my work because I think it’s a way to make some of the things I discuss bearable. So I find that the response in the U.S. is very vocal and people get it. I’m definitely writing from an American experience. I also found people were equally receptive in England, in London particularly. I had an experience when I did my work in Scotland: The audience was completely quiet, even during funny moments. But then, after every single performance, people would come up and they have tears in their eyes and they would talk about how much they enjoyed it or were moved by the performance. I found that I would still reach them but they were responsive in a different kind of way. I’ve also performed my work in places where English isn’t the primary language. I’m trained as a singer. My work is very poetic and rhythmic, and also includes music. A lot of times, they’ll respond to the rhythm, the sound and the emotion of the work.”

Beaty said rhythm and sound will also factor greatly in the next play he plans to produce.

“I’ve written a new play that I’m playing a lead in about that first world-renowned African-American classical vocalist, named Roland Hayes,” he said. “It’s a play for three actor-singers and I’m singing the role of Roland Hayes. Hopefully we’ll bring it to Philly.”

“Resurrection” and the upcoming Roland Hayes piece may be cases for Beaty’s talents behind the scenes in the world of theater, but he isn’t one to stay in one artistic place for too long. He said he intends to continue showcasing his considerable on-stage talents for the foreseeable future.

“I definitely still plan to perform,” he said. “I have a concert, an evening of my spoken word that I’m doing at Joe’s Pub in April in New York. I was cast in ‘Porgy and Bess’ for the Washington National Opera in 2010.”

Beaty is also making tentative steps toward the world of television and recently created a half-hour comedy pilot for Showtime.

“I just turned that in,” he said. “We’ll find out in the next month if they’re going to order the full series.”