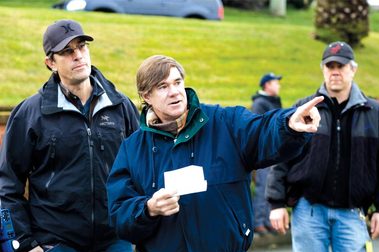 Perhaps the most anticipated queer film of the year, “Milk” was more than a decade in the making. PGN recently met with director Gus Van Sant, screenwriter Dustin Lance Black and the male cast members (save Sean Penn) to discuss making “Milk” and the legacy its subject left.

Van Sant did not know who Harvey Milk was when the first openly gay elected official was assassinated along with San Francisco Mayor George Moscone in 1978. But the filmmaker does remember where he was when he heard about the murders committed by former city supervisor Dan White.

“I was driving across country,” Van Sant said in our recent interview. “The story was capsuled in a little news flash — the mayor was shot by a supervisor, who then shot a fellow gay supervisor. So there was a sort of intrigue — you got the idea that there was an in-house argument and that the mayor and the gay supervisor were somehow connected and the one who shot both of them had something against them. Which, in the end, was the way it was.”

Van Sant’s remarkable film chronicles Milk’s life and death. The director has been working to bring the project to the screen for about 12 years.

He learned of the Milk biopic through filmmaker Rob Epstein, who won an Oscar for his documentary, “The Times of Harvey Milk,” in 1984. After Oliver Stone, who was attached to the project, dropped out, Van Sant took it over for a year and developed a script. But disagreements about the production put it in turnaround until Black wrote a script that Van Sant wanted to make.

Ironically, when Van Sant began to cast the film, he returned to his original candidate for the title role, Penn. The filmmaker said he’s pleased that the “most macho guy in Hollywood is playing Harvey Milk.” He added, “[Penn] is not the obvious choice, and that gives the movie some vibrancy. Sean completely fused himself into Harvey.”

Curiously, the director’s 1998 choice to play White was Penn’s “Taps” co-star, Tom Cruise. Van Sant offered Cruise the role again when the project reignited, but the actor decided not to do it. Matt Damon, too, passed on the White role, which eventually went to Josh Brolin. He does an admirable job in the film and is especially deft at projecting White’s humanity.

“Dan had to be sympathetic,” says screenwriter Black. “Harvey was drawn to the man for most of the time they worked together. Harvey tried to pursue a friendship, and educate him. You have to see Dan White through Harvey’s eyes.”

The film does this particularly well, which is why the impact of the tragedy resonates.

As for Milk’s suggestion in the movie that White is a closet case with internalized homophobia — that eventually caused him to kill — Van Sant defends the idea. “It’s Harvey’s perspective, and he mentioned that Dan might be a closet case to several people he worked with in City Hall in his last two weeks. He did it as a warning.”

However, Brolin maintained he didn’t play White “that way.” Yet, a tremendous scene in which a drunken White turns up late to Milk’s birthday party suggests otherwise.

Brolin recalled filming this memorable encounter: “It was written as a very straight scene. It was more the need [of Dan] to connect with somebody, and resenting himself. He was late to Milk’s birthday, and wanted to give him a bottle of alcohol for his birthday. And I said to Gus, ‘What if I drank the alcohol before I got there?’ And we started playing with that, and it took off and had a life of its own. There was one point where I started doing karate moves. Sean looked worried, which is very sweet, actually.”

Brolin said he didn’t want to make White one-dimensional or a caricature. “I find it important to care what the person is going through,” he said, echoing Van Sant’s idea about portraying White sympathetically. “I think the more interesting question is, Why?”

The actor said he believes White didn’t have the “heart and passion” that Harvey did when he was in office. “That’s why he’s Dan White, and why he turned out the way he did,” Brolin said.

Franco, who grew up in the Bay Area and said he “knew a little bit about Milk” before getting involved in the production, took the “housewife” role in the film. Smith provided emotional grounding for the activist/politician.

“I wanted to show a loving relationship, one that would be in contrast to the rest of the political stuff — to take it down to a personal level,” Franco said. “He was with Harvey for four years, so he was a big part of Milk’s life.”

The actor researched his character, but as Smith was not prominently featured in books on Milk, such as Randy Shilts’ “The Mayor of Castro Street,” he had to rely on oral histories from folks who knew Smith.

“I talked to Danny Nicoletta, who worked in the camera shop; Cleve Jones and Frank Robinson — and they all had different stories,” Franco recalled. But the actor’s most useful tool was footage filmmaker Rob Epstein had of Smith, which Epstein had saved in a vault.

“He had a whole extended interview of Smith from the period, which was great,” Franco said with enthusiasm.

In contrast, as Jack Lira, Milk’s other lover, Mexican actor Diego Luna did not conduct much research on the character he played. Instead, the actor looked deeply into the character of Harvey. “My approach was to [focus] everything in relation to Harvey — what he needed at the time and what Jack represented for Harvey,” Luna said.

“There is something about Jack that was special [to Harvey]. It was magic. In my research, this guy said to me that he was walking next to the house and Harvey and Jack were having sex and it was the loudest sex he ever heard. They were laughing and shouting and spanking. It was like Harvey wasn’t Harvey. It was simple, and instinct[ual] and nothing about politics.” Such tender moments are wonderfully recreated in the film.

As “Milk” reveals the facets of Harvey’s character — activist, politician, friend and lover – Van Sant’s excellent film underscores the tragedy of losing a bright light to such a senseless murder.