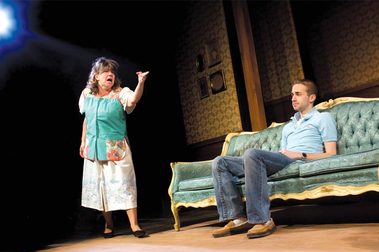 With the holiday season in full swing, a new play is set to show how even the most well-intentioned family gatherings can erupt into chaos.

And because it’s not happening to you, it’s bound to be hilarious.

So imagine meeting your significant other’s family (stressful on any occasion) and coming out at the same time. (Ouch.)

“Mambo Italiano” is the story of two roommates Angelo and Nino, who decide to come out and reveal to their respective Italo-Canadian immigrant families that they are more than just roommates.

Director Travis A. Whitaker said the script, written by out Montreal playwright Steve Galluccio, had been sitting on his shelf for years and he finally got the opportunity to make it happen on stage this year.

“I felt now is the right time for it,” Whitaker said. “This show, while a comedy, is very much about the relationships of families and generations, as well as acceptance.”

Of course, acceptance rarely comes without some dramatic tension in tow, and Whitaker said there is plenty in this story.

Whitaker said that while there are elements of the play and the setting that are true to Galluccio’s life, the play isn’t necessarily based on it.

Whitaker added that, even though the play is set in Montreal, it’s a tale that could happen anywhere.

“To be honest, it’s important only because the playwright has set it that way,” Whitaker said. “In the initial readings, when I first read it years ago, with the exception of one line where he specifically mentions that they are in Montreal, it could have been in any Italian neighborhood. It could be in Philadelphia. It could be in Little Italy in New York. It could be in Pittsburgh. It could pretty much be anywhere. There is very little difference. I did a lot of research over the summer about the communities and the comparisons between Philadelphia, New York, Montreal, Pittsburgh and so on. They all sort of fit the same pattern. The nice thing about Montreal and looking at the cultural differences is that Montreal has an Italian neighborhood that was built up around the time that the South Philly Italian neighborhoods were. It’s the same style of houses even. Everyone lives within doors of their family. The feeling is very much the same as it is in Philadelphia.”

Whitaker added that it’s the backgrounds of the families in the play, more than the locations, that drive the story.

“The parents are first-generation immigrants and there’s a moment in the show where it becomes evident,” he said. “Because of their lack of naturalization, there’s some attitude that needs to happen and has to happen because they come from a place that homosexuality is not talked about. They’ve been living in Montreal for 30 years, but they’re still in this Old-World mentality.”