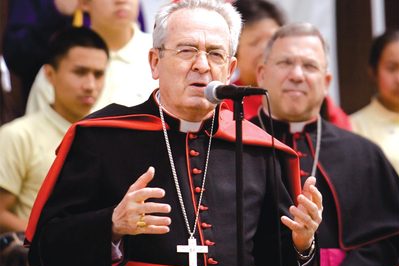 Two bills with the potential to have a tremendous impact on the local LGBT community had their days in the Pennsylvania legislature in 2008 — and failed. While countless LGBT community leaders and ally lawmakers rallied behind HB 1400, a nondiscrimination bill that would extend protections to the LGBT community, and against SB 1250, which would have defined marriage in the state constitution as being between one man and one woman, one organization worked just as tirelessly on the other side of the issues, seeking to use religion to limit the rights of Pennsylvania’s LGBT community.

The Pennsylvania Catholic Conference, whose board of governors is headed by Philadelphia Cardinal Justin Rigali, is the public-affairs branch of the state’s Catholic bishops and dioceses. The organization lobbies for legislation that supports “pro-life, social-justice and family-life” issues and came out swinging on both LGBT issues. Neither bill came up for a full vote, but both could be introduced again in the new legislative session.

After state Rep. Dan Frankel (D-23rd Dist.) introduced HB 1400 in June 2007, the legislation was referred to the House State Government Committee, which held a series of public hearings throughout Pennsylvania in the fall of 2007. Frankel and committee chair Rep. Babette Josephs (D-182nd Dist.) invited testimony from supporters and opponents of the bill, which would have amended the Pennsylvania Human-Relations Act to prohibit discrimination based on sexual orientation and gender identity in housing, employment and public accommodations.

Three representatives of the Pennsylvania Catholic Conference testified during the Oct. 4 hearing in Pittsburgh against the bill, charging that HB 1400 would infringe upon the religious freedoms of Catholic institutions.

The Conference argued that the ministerial exemption — which would protect religious institutions from allegations of discrimination — that existed within HB 1400 needed to be expanded so that all employment positions at religious institutions, such as bus drivers or janitors at Catholic schools, would be exempt from the legislation. Committee representatives repeatedly requested that the Conference submit the language they wished to see included in the legislation, but that submission was never made.

The only other organization to testify against the legislation was the Pennsylvania Family Institute.

The Catholic Conference was invited back to the November 2007 hearing in Philadelphia but the organization declined, although its representatives continued to lobby lawmakers to vote against HB 1400.

The bill came up for a vote in the committee in August, and Josephs decided not to proceed as two Democrats who’d pledged support were absent from committee that day and she was unsure if a Republican, who’d previously committed to the bill, would actually follow through with a vote.

The Catholic Conference was just as persistent when it came to its support of SB 1250, the so-called Marriage Protection Amendment. State Sen. Michael Brubaker (R-36th Dist.) introduced the legislation in February, and it was referred to the Judiciary Committee.

Conference representatives voiced their support of the initiative through numerous radio and television interviews as well as intense lobbying. Six of the 14 press releases the organization published between 2006 — when a similar bill was introduced in the legislature but passed in different versions in the Senate and House, essentially nullifying it — and 2008 focused on the legislation, explaining the value of “traditional marriage” and applauding legislators who supported the bills.

In May, SB 1250 was tabled after collaboration from House and Senate leaders.

The conference’s leader came out several years ago as a strong opponent of same-sex marriage. Rigali was among a small collection of religious and civic leaders who attended a 2006 White House event hosted by President Bush that was meant to bolster support for a federal Marriage Protection Amendment. The archbishop, who signed a petition by the Religious Coalition for Marriage urging lawmakers to support the legislation, met with Bush before the event and discussed the necessity of the constitutional amendment.

In an interview with Catholic news service LifeSiteNews.com in June 2008, Rigali again spoke about the continued fight for same-sex marriage, espousing his antigay views and what he saw as the need for religious institutions to organize against efforts to legalize same-sex unions.

“The Church accepts people as they are. Jesus says the church is like a net, it pulls in everybody. Everybody belongs to the church; there are sinners, there are saints, there are people with wrong ideas. But the Church continues to proclaim what Jesus taught,” Rigali said. “There is no room in the Church for the acceptance of aberrational ideas. There is room in the church to accept, to understand and to love people whoever they may be, not to tell them that what they are advocating is right, not to justify it. That is quite different. That is totally, totally different.”

Rigali insisted that the Catholic Church would not shift its position on the issue in the face of pressure from LGBT-rights supporters.

“We accept people but we cannot be unfaithful to Christ. We will not accept gay marriage. The church has explained this over and over and over again and she will have to continue to explain it.”

Rigali said that the Church has a responsibility to “present the beauty of human sexuality” and that it is committed to steering LGBT individuals toward a heterosexual lifestyle.

“We explain God’s plan. We try to understand people who have the same-sex attraction. We try to help them, try not to speak platitudes to them but tell them what God’s plan is and how they are to face their life.”

Rigali’s stance is detrimental, frightening and altogether beside the point. His opposition to a nondiscrimination bill is unnecessary and overreaching. The Catholic Church — or any church — has no business attempting to influence who the government should protect from harm, harassment or discrimination. Note that there is no mention of behavior here — what the Church claims to rebuke. The Church’s condemnation of homosexual behavior is not inconsistent with seeking protection from discrimination. Likewise, the cardinal need not support a nondiscrimination bill only to abstain from blocking its passage.

This past year, intentional or no, Rigali had the largest impact on the LGBT community.