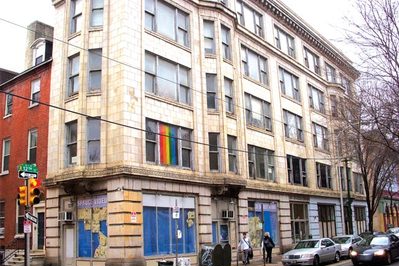 A Center City building that formerly housed many LGBT-oriented organizations has fallen into disrepair, and some are calling for an end to its vacancy.

But failed commercial ventures, severe financial losses and other extenuating circumstances have prevented the building’s owners from rehabbing the property, according to city records.

The building is owned by the Odd Fellows of America, a fraternal organization that was headquartered in the building for many years before it relocated to Virginia about three months ago.

A lien has been placed on the property because the Odd Fellows allegedly owe the city $52,696.97 in back taxes. The assessed value of the building is $450,000, according to city tax records.

In October, the city’s Department of Licenses and Inspections cited the owners for not maintaining a clean building and for failing to register as vacant commercial property.

In a brief interview, Graham T. Paige, grand secretary of the Odd Fellows, declined to go into details about the future of the building.

“We are negotiating with a developer to renovate the building, to do some pretty massive renovations, then we would have some commercial space in it, and possibly some apartments,” Graham told PGN.

He said the building became totally vacant about three months ago, when the Odd Fellows relocated their headquarters to Virginia.

The Odd Fellows are involved in contentious litigation with 260 S. 12th Street Co., a limited-liability company that allegedly was supposed to develop a restaurant on the first floor of the building.

According to papers filed in Common Pleas Court, the Odd Fellows claim they sustained more than $300,000 in losses due to the failed venture.

But attorneys for 260 S. 12th Street Co. filed a counter claim, alleging that it was the company that sustained significant losses.

John M. Corcoran, lead attorney for 260 S. 12th Street Co., said he’s prepared for a trial but wouldn’t rule out the possibility of an out-of-court settlement.

“I’m prepared for any eventuality that the good Lord puts in front of us,” Corcoran told PGN.

He maintained the 1201 Spruce St. building was in a state of disrepair long before his clients attempted to develop the restaurant. “It was a shit hole,” Corcoran said.

Paige, of the Odd Fellows, agreed that the case may be settled out of court, but declined additional comment about the pending litigation.

Beverly N. Muldrow, an attorney for the Odd Fellows, could not be reached for comment.

Spruce Street Video was located in the building for 22 years. But increased rent, reduced retail space and other problems with the landlord caused owner Franny Price to relocate the store.

Price said Spruce Street Video moved out of the building in April 2007 and relocated to a nearby storefront, at 252 S. 12th St.

“It was heartbreaking that we had to move out,” she said.

Price hopes the vacant building will be restored to its former grandeur, and that it will be the site of diverse LGBT businesses and nonprofits once again.

“It is an institution in the community,” she said. “When we moved out, it was the end of an era. But we hope it will be restored and redeveloped.”

In its heyday, Price said, the building had a stabilizing effect on the community. Today, it acts as a magnet for vagrants and is a detriment, rather than an asset, to the Gayborhood, she added.

Price said she recently spotted a tree growing out of a wall of the building, near its roof.

“Somebody needs to do something,” Price said. “It’s been in a dilapidated condition for too long.”

Doug Oliver, a spokesperson for Mayor Nutter, could not be reached for comment about any role the Nutter administration might play in helping to rehab the building.

Price remains optimistic that the building eventually will be developed in a manner that enhances the neighborhood.

“Whoever develops it should do so with GLBT sensitivity,” she said. “It should be a space for offices and businesses that have an interest in the GLBT community.”