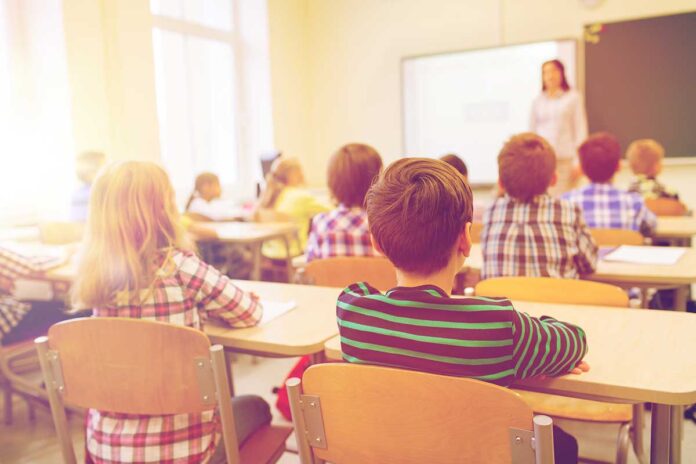 The school principal wanted to talk about the dress. It was “inappropriate,” she said.

I remember just staring at the principal when she said this, feeling absolutely floored. I’d asked for this meeting to address the bullying my gender non-conforming child — who I’ll call Jamie — had faced since they started wearing dresses to school. The school, however, was intent on policing a five-year-old’s dress instead of ensuring a safe learning environment for Jamie and other LGBTQ students.

Jamie always had an eye for shiny, sparkly things. I always affectionately called Jamie’s style very Elton John-esque. Sparkly, shiny accessories like heart purses and hot pink flamingo sunglasses were regular staples in our home. When Jamie asked to wear dresses, I was surprised. But clothes are clothes in our household, and our whole family was enthusiastically supportive. The dress Jamie decided to wear to elementary school was perfectly them: navy with multiple tiered ruffles, paired with orange striped Halloween socks and jelly shoes. Elton would approve, most certainly.

The bullying started from the moment Jamie boarded the bus and continued in the classroom and through recess and lunch. On the first day Jamie wore a dress to school, classmates stole their shoes because, the kids said, they were “girl shoes” that Jamie shouldn’t wear. Students of every grade commented on Jamie’s appearance throughout the whole school day. There was no safe spot to avoid the unwelcoming, harassing environment. School staff saw, but never intervened. Jamie started hiding under seats on the school bus to avoid the harassment. They became withdrawn. They stopped smiling. At a time, where I should have been worrying about whether they were learning their ABCs, I was constantly worried whether my child was safe.

That’s why I called a meeting with Jamie’s school. We begged administrators for help. We asked them to educate Jamie’s peers about basic principles of inclusivity so that my child and other gender non-conforming students could be safe at school. But the school’s response was the grown-up version of the children’s bullying.

Administrators accused Jamie of dressing inappropriately and threatened to discipline them for violating the dress code. They refused to address the bullying, insisting maybe Jamie was just going through a phase. They said Jamie — a five-year-old — should stand up for themselves. And besides, the school insisted, “everyone is entitled to their opinion,” as though the safety and humanity of my child was up for debate.

After weeks of unrelenting and unchecked harassment, Jamie finally begged me not to send them to school because they didn’t want to get made fun of anymore. A therapist diagnosed Jamie with anxiety and depression stemming from the harassment. It was gut wrenching. As a mom, I fell apart. It destroyed my mental and physical health knowing that my sweet kiddo was getting sent into a discriminatory environment every day. I was trying to protect them, but nothing worked.

When March 2020 came and the coronavirus halted school across America, I think we were the only family who breathed a sigh of relief. After a few months away from school, Jamie slowly started to smile again. But I knew I couldn’t keep Jamie at home with me forever just to keep them safe.

Jamie is doing better now. After researching Jamie’s legal rights online, I filed a complaint with a state human rights agency. With the help of lawyers at Public Justice and the Education Law Center of Pennsylvania, I was able to negotiate a settlement through which Jamie’s former school is paying for them to attend an inclusive private school for a few years.

Jamie is thriving there; they were just chosen as “Student of the Week.” As part of the settlement, Jamie’s home district also agreed to implement trainings and policy changes so that, when Jamie does return, school should be a safer environment.

Not all states have laws as good as Pennsylvania’s, though, and it breaks my heart to think about families across the country who don’t have the legal tools that were available to me. More than half of LGBTQ students are bullied, and when their schools won’t do the right thing, they need clear legal protections. That’s why I’m hoping that the U.S. Department of Education will soon publish new regulations requiring schools across the country to protect gender non-conforming students.

The U.S. Department of Education is tasked with enforcing Title IX, the federal civil rights law that prohibits sex discrimination in education. The current Department leadership has been clear that Title IX requires schools to intervene when students are bullied based on their gender identity and forbids schools from discriminating against gender non-conforming students (for example, by subjecting them to discipline for wearing the “wrong” clothes). But the Trump Administration’s Department of Education disagreed. By passing binding regulations now — as the Department has suggested it might do this spring — the government can ensure that students are protected in the future, regardless of who sits in the White House.

Every child deserves to feel safe and accepted at school, no matter who they are or where they live. It shouldn’t be a luxury, or an accident of geography, for children to be allowed to express themselves without discrimination. After all, our lives are all a little richer with some Elton.

Catherine Barnes is a married mother of three kids and a social worker who enthusiastically supports LGBTQ+ rights. She lives in Northeastern PA and has used a pseudonym for her child’s name in order to protect their identity.