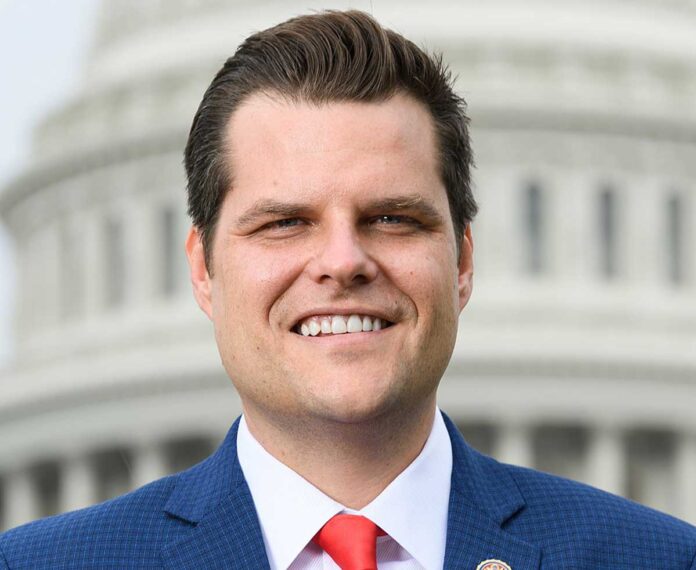 A wise man once said, “What a stupid son of a bitch.” And that wise man was President Joe Biden, talking about Fox News White House correspondent Peter Doocy.

I have watched the video several times, because this particular moment reminds me so much of my dad, who said a lot of swears in his day. I have him to thank for my own unapologetically foul mouth. My dad died in 2015, before Trump ever made it to the White House, but over the years I can only imagine what he would have had to say about the plethora of creeps that have crawled out of the right-wing sewer.

Creeps like U.S. Rep. Matt Gaetz (R-FL) who recently described Republicans Paul Ryan and Trey Gowdy as “limp-wristed” for not being fascist enough when the Republicans had the majority in the U.S. House. (Note: right now, Democrats have a majority in the U.S. House, though not in the Senate, which means promising things that would actually help people in the House and then sending those promises to the Senate to die. Please vote, god damn it.)

“Limp-wristed” is, as you and Gaetz knows, a pejorative way of depicting a gay man. As science will tell you, straight men have strong, firm wrists, while gay men have literally no bones in their wrists, just sinuous gristle or something. It’s a wonder that Elton John can even play the piano.

Gaetz, who is currently the subject of a sex trafficking investigation by the Department of Justice, a case involving a 17-year old girl, was responding to Republican Newt Gingrich, former Speaker of the House back in the late ‘90s, who said that if Republicans take control of the House in 2022, they would put members of Congress who are investigating the deadly Jan. 6 insurrection in jail. Not the people who DID the insurrection, but the people who are looking into the whole thing. Totally normal, and not at all how things function in a fascist state.

Which prompts me to remind anyone who needs reminding that “antifa” means anti-fascist, which is why people who run in the same circles as Gaetz and Gingrich would like you to believe that antifa is a terrorist organization so well-organized that they were able to engineer the Jan. 6 insurrection by using Trump supporter cos-play rather than a reaction to the real, actual danger of fascism creeping across the country.

About that sex-trafficking investigation: Things don’t look good for Gaetz. And yet, “GOP leaders haven’t called on Gaetz to resign or stripped him of his committee assignments,” Business Insider reports. These are the same Republicans who believed and/or did not condemn the right-wing fever dream that Hillary Clinton had some kind of sex trafficking dungeon below a D.C. pizza parlor during the 2016 election.

Gaetz’s resume reveals decades of hands-on experience as a certified creep. He apparently showed off nude photos of women he had slept with to his colleagues on the House floor. In 2019, he opposed the Equality Act, which would ban discrimination against LGBTQ+ people, saying it would hypothetically allow Trump to declare himself “the first female president.” He wasn’t saying that Trump would do that, he was just playing the conservative game of “If we treat LGBTQ+ people as equals, then everything goes out the window, and there is just no telling what will happen!”

He later clarified that he supports transgender rights and that he won’t “denigrate or deny their existence or their struggles.” He was merely expressing concern “about the potential of bad actors who would exploit the provisions of this law for their own gain.”

I think we can all agree that Donald Trump is a bad actor who exploits the law for his own gain. But he’s also someone who hates women, so probably not the best analogy on Gaetz’s part.

Gaetz is one of Trump’s biggest and most vocal supporters and, as an anonymous official told Business Insider, “Trump’s associates are often slimy or controversial and it doesn’t seem to impact his supporters.” Sadly true.

Not that Gaetz has a backbone, but he has “stood up” to Trump, opposing the declaration of a national emergency to build Trump’s fabled border wall. The reason sure doesn’t fit with his “I don’t hate trans people” claim.

He told The Wall Street Journal, “I don’t want the next national emergency to be that some Democrat president says we have to build transgender bathrooms in every elementary school in America.”

Spoken like a true champion of transgender rights. Or, as my dad might have said, “A stupid son of a bitch.”

Gaetz is running for reelection this year. Let’s work to defeat him.