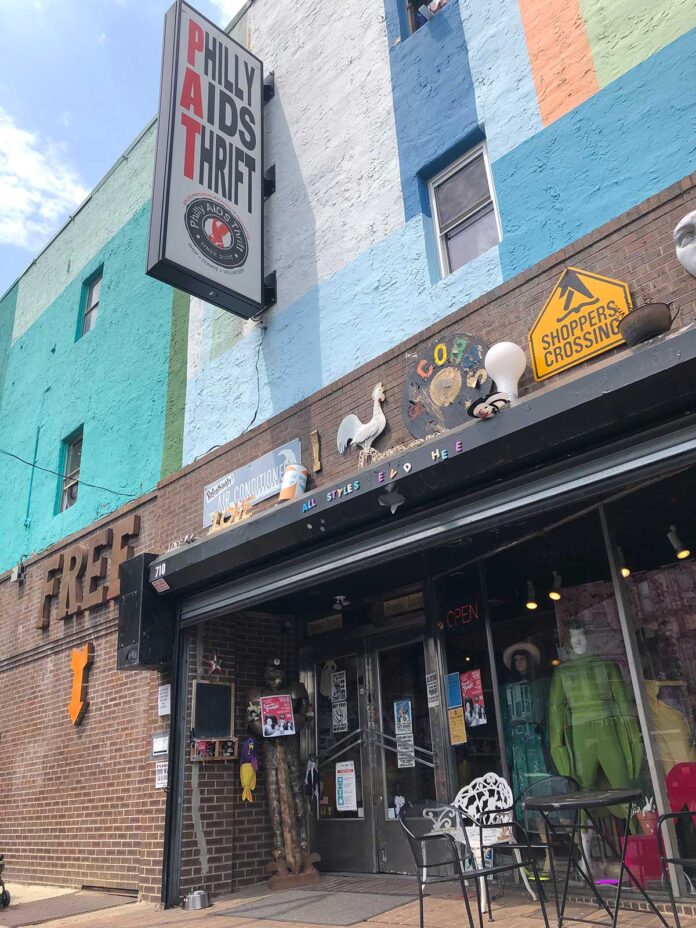 While many businesses may have had to downsize due to the financial setbacks posed by the pandemic shutdown, local secondhand emporium Philly AIDS Thrift (PAT) has some good news. Their primary location, just off of Bainbridge on 5th Street, is expanding.

“After 10 years of calling this location our home, there was still 15% of the building which we had yet to acquire,” Christina Kallas-Saritsoglou one of the organization’s co-founders and managers explained. “It was always something we thought we’d do when the time was right.”

Once Kallas-Saritsoglou was able to reopen last mid-June to shoppers, their landlord allowed PAT to take over some of that extra space. It proved to work out very well, as they were able to safely receive donations while still following the CDC’s guidelines for social distancing.

“Not only do we now have an exclusive double door entrance dedicated to donation drop-offs,” Kallas-Saritsoglou beamed, “but there is enough square footage to create more retail shopping! With the new retail side we are able to sell more of the amazing stuff people kindly donate to us, and the easier it is for people to shop, the more money we can raise to help folks living with HIV/AIDS.”

For those of you familiar with the beautifully curated and decidedly queer window displays featured at PAT, their new extended space is found to the left of that large window.

PAT staff and volunteers were previously sorting donations in a small space of approximately 150 square feet. With the new expansion they have ten times that amount of space. To give you an idea of the impact this larger space will have on the organization: the higher square footage is roughly equal to the size of a traditional, three-bedroom South Philadelphia rowhome.

Despite the challenges of the pandemic, PAT did not stop serving the community.

“Five months ago we distributed $200,000 to 24 HIV organizations through our annual grant giving program,” Kallas-Saritsoglou, proudly shared. Some of this year’s recipients included Black and Latinx Community Control, the William Way Community Center, Bebashi Transition to Hope, and Action Wellness. PGN spoke to two of the organizations who recently benefited from PAT’s largesse.

“PAT realizes that Black and Latinx trans and queer communities are the experts of their HIV-prevention, by our own lived experiences,” explained Jose Marco of Black and Latinx Community Control. “Their generous grants have made it possible to conduct online symposiums to examine how the current systems have failed. HIV —” Marco reminds readers, “— is proof-positive of social and racial injustice.”

The impact that PAT extends to the LGBTQ-community includes but goes above and beyond providing resources for those affected by HIV/AIDS. The William Way Center extols the impact funds collected from purchasing thrifted treasures has on their outreach, from seed money to begin programs to additional funds to foster ongoing support.

“PAT’s generosity to William Way has helped start and strengthen our Trans Resource Center,” said Christ Bartlett, Director of the William Way Center. “We are thrilled that their expansion and space will help to grow their capacity to help us and other organizations even more.”

While the retail aspect of PAT’s activism didn’t see much of a negative impact during the COVID-shutdown, perhaps because so many locals were locked in their apartments or housebound and were anxious to shed possessions, fundraising was at an unfortunate low. Now, as many prepare to venture out into the world again, PAT looks forward to their first fundraiser. And, let’s just say their choice of fundraising material is “divine.”

“We’re planning an event at the Philadelphia Film Society Drive-in at the Navy Yard,” explained Kallas-Saritsoglou. “We’re hosting a screening of John Waters’ cult classic “Female Trouble” on Wednesday, June 2nd. We thought it would be a great way to kick off Pride month as well as using the event to raise money for our building expansion.”

You can get tickets to the screening here www.phillyaidsthrift.com/drive-in. If you’re unable to attend, remember you can support PAT by making a purchase, or donating goods to be sold. You can make donations on Tuesdays, Thursdays, Fridays, and Saturdays from noon until 6PM.