Representation of LGBTQ people and families in children’s media has taken several recent steps forward, even as these advances remind us how far we have yet to go.

Mattel’s powerhouse American Doll brand recently announced its 2021 “Girl of the Year” doll: 10-year-old Kira, who loves caring for animals and the environment. In further backstory from an associated video and book, “Kira Down Under,” we discover that Kira is spending the summer at the wildlife sanctuary run by her two Australian aunts, a married same-sex couple.

“As American Girl kicks off its 35th year, Kira joins our lineup of diverse and purposeful characters who star in stories that reflect the realities of the times — whether it’s historical or modern-day,” said Jamie Cygielman, General Manager of American Girl, in a press release. “Through Kira, we hope our fans will learn that we all have a part to play in taking positive action for our planet.”

Sydney Jean, a blogger on the website American Girl Doll News, wrote of Kira’s family’s broader impact, “When I found out that Kira had two aunts, Mamie and Lynette, I wanted to cry tears of joy… it means the world to me that American Girl is taking a big step and representing lesbians — people like me — in their newest book series.” (Note, though, that while they’re a same-sex couple, it’s unclear whether they’re lesbian or bisexual.)

Others were not as thrilled. One Million Moms, part of the recognized hate group American Family Association, has asked its (fewer than one million) members to boycott the company unless they discontinue the aunts’ storyline. Some people, too, are giving “Kira Down Under” one-star reviews at Amazon because of the aunts. One wrote, “This book blatantly introduces very mature topics.” Spoiler alert: It doesn’t. (Also, if I wanted to, I could accurately explain the creation of my family to a child without once mentioning sex, which is probably more than these reviewers could do regarding theirs. Whose family really requires the discussion of “mature” topics?)

The homophobes, however, are swimming against the current of progress. The American Library Association’s Youth Media Awards on January 25, which included the prestigious Newbery and Caldecott Awards, also included the Stonewall Book Awards for children’s and young adult books. This year’s Stonewall winner was a board book for toddlers about different types of families, “Little Feminists: Families,” from independent publisher Little Feminists. That in itself isn’t notable: there are numerous board books about diverse families, including many that show same-sex parents. There are even now several board books about Pride. This one stands out, however, for including not only same-sex parents but also gender creative children and a pregnant transgender man. All of the photos in the book are of real families.

That’s right. A book for toddlers that includes such broad queer representation just won a significant national award — and many librarians use these awards to guide what they buy for their libraries. The ALA’s imprimatur can also help foil those who want to ban these books.

Elsewhere, PJ Library, a service that sends monthly, free books to families raising Jewish kids, included a board book starring a two-mom family in January’s shipment to families with 1-year-olds, marking a striking change from how the organization handled a book with a two-dad family just a few years ago.

PJ Library, which has become a major force in Jewish education for children, is a program of the Harold Grinspoon Foundation and unaffiliated with any Jewish movement. In 2014, it offered Elizabeth Kushner’s picture book “The Purim Superhero,” about a boy getting ready for the Jewish holiday of Purim. He also happens to have two dads. Unlike their other titles, however, they only sent “The Purim Superhero” to families that specifically requested it — although the Reform, Reconstructionist, and Conservative movements of Judaism all supported marriage equality; only the Orthodox movement didn’t.

“Like it or not, parents in our community have differing opinions about same-sex marriage and how or when it is discussed with children,” wrote foundation trustee Winnie Sandler Grinspoon at the time. “… We think many families would love this book. Yet we know that there are some parents who would want to decide for themselves.” Many people were outraged that the book was treated differently. The demand for it was overwhelming, however; PJ Library ran out of copies within 36 hours and had to print more.

Fast forward to this past January, when PJ Library simply included “Havdalah Sky: A Poem for the End of Shabbat,” by Chris Barash and illustrated by Sarita Rich, in its shipments to all subscriber families with one-year-olds in the U.S. and Canada. The book shows two moms, their child, and a set of grandparents observing the weekly ceremony that ends Shabbat. A publicist told me that over 14,000 families have received the book.

On its blog post announcing the pick, PJ Library wrote, “Our committee also loved that this book depicts a family with two moms. PJ Library strives to include books that represent all our families, and Havdalah Sky is an excellent contribution to that mission.” What a difference a few years makes.

Now, we need to look to the future. Could there someday be enough quality LGBTQ-inclusive kids’ books and a dedicated funder to offer a service like PJ Library — free, monthly, age-appropriate books — to queer families? On the first part, I think we’re getting close. On the second, I can only hope. And with Mattel already offering a line of gender-inclusive dolls, perhaps someday, too, American Girl will offer a doll who just happens to be a transgender girl.

Dana Rudolph is the founder and publisher of Mombian (mombian.com), a GLAAD Media Award-winning blog and resource directory (with a brand-new database of books and media) for LGBTQ parents. 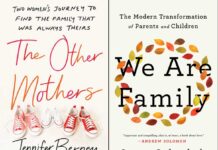