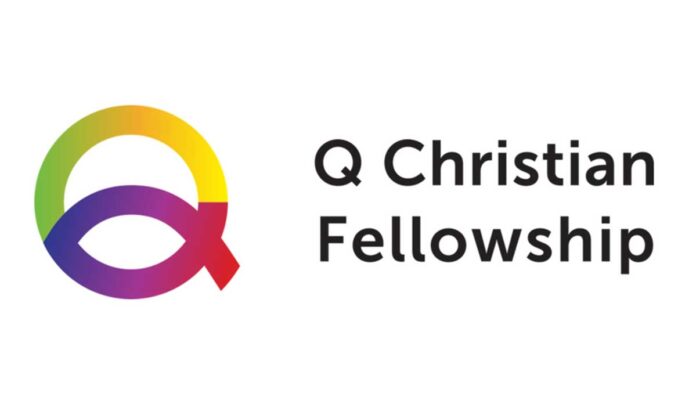 If you are one of many LGBTQ+ Christians who have felt excluded or not fully embraced by the denomination you were raised in or are currently in, Q Christian Fellowship welcomes you with open arms. Founded in 2001 as the Gay Christian Network, the group changed their name in 2018 to the Q Christian Fellowship. As the group is all about inclusion they felt it was time to expand their appeal.

“We exist to help LGBTQ Christians reconcile within themselves and within their communities their identity and their faith,” said QCF Executive Director Bukola Landis-Aina when asked how to sum up the group’s mission. “To make sure that they have what they need to show up as fully LGBTQ and fully Christian, whether that be by providing theological and relational guides or simply by modeling the long-desired community that centers their experiences and identities.”

Q Christian Fellowship is a worldwide, multi-denominational group which welcomes members coming from all sects and denominations. While they do not have a formal membership model, they have nearly 50,000 people following them between their social media outlets and mailing lists. Their last in person conference drew 1,500 LGBTQ people of faith, their families, and allies. This year, their virtual conference drew another 1,000 people.

Reading through bios on the QCF website, one realizes that for some LGBTQ Christians, walking away from their faith after coming out was just not an option.

“During my 20s, I disconnected from the conservative church I had grown up in,” said Nate Osburn who serves on the QCF board and makes his home in Philadelphia. “I didn’t have a faith community for those few years as I was coming out. QCF helped me explore and eventually rediscover my faith in affirming spaces.”

Osburn, who grew up as a missionary’s kid in a church-centered household, describes himself as a gay Christian. His coming out, during college and graduate school, was met with letters and conversations he and his family had to navigate.

For some gay Christians, part of their journey may have been quite traumatic. This is can be especially true in regards to the harmful practice known as conversion therapy. The Biden Administration seeks to outlaw this process, which was highlighted in Garrard Conley’s memoir “Boy Erased” and the subsequent film version.

Taylor Darden, a graduate student in Wilmington who is involved with QCF, once brought himself to Christian-based therapy to try and change his sexuality.

“The easy narrative for me as a teenager was that my family dragged me kicking and screaming to therapy and forced me to undergo traumatic experiences against my will,” Darden said. “But that isn’t accurate. Like many young people in conservative areas of the country, particularly in the 2000s, I thought two things. One, that ‘homosexual behavior’ was wrong (I was taught that ‘having attractions’ wasn’t a sin), and two, that there was hope, I could change myself.”

Darden describes himself as having always been “a real overachiever.” He tried to pass the conversion therapy grade. However, when he was told he was healed, that’s when the real trauma began to happen.

“I managed to convince myself that I really was straight, that I had been ‘healed of homosexuality,’ but in convincing myself of that, I lost my own sense of reality in a very real sense. I developed many symptoms of psychosis and suffered a serious breakdown requiring a semester off from school,” Darden said.

Landis-Aina knows from firsthand experience about coming out and how a person might not be accepted or embraced by their home and community of faith. As a first generation Nigerian-American, does her personal history inform her work with QCF?

“Yeah, my background is such that my parents had a hard time with it, and with me coming out. No concept of what it was to be bisexual,” the NYU and MIT-trained patent attorney shared. “So, it gives me a unique perspective as someone from a different culture. Coming out was perceived to be rejecting my heritage and my culture. They didn’t know what it was.”

With some young people thinking, or hoping, that they can be healed through conversion therapy, QCF is engaging with both LGBTQ-affirming and non LGBTQ-friendly congregations, churches, and people of faith to dispel that notion. Landis-Aina calls this project, with a nod to biblical language, The Good Fruit Project.

“I had this idea to have a unique voice to speak as LGBTQ people of faith. What does Jesus and the bible say about LGBTQ people? How do you know what’s right? Even if we can’t get people to agree, we should get them to a place where [they are trying] to learn and change.”

For The Good Fruit Project, QCF has partnered with The Trevor Project — which focuses on suicide prevention and crisis intervention for LGBTQ young people — to work together to educate people about the mental and physical harm of conversion therapy, as well as to create a faith-based case against the practice. The idea is that even if people can’t personally agree with LGBTQ relationships, lives, or policies based on their faith, they should realize that the bad outweighs the good.

According to a 2018 article in Psychology Today, a person is often at greater risk of suicide and depression because of the long-term trauma of conversion therapy.

“It’s bad fruit,” Landis-Aina said. “As Christians we should be able to commit to not supporting trying to change anyone through conversion therapy. If you’re a person who goes to a church, ask your pastor about it, try to create some safety.”

The Good Fruit Project includes a downloadable guide, a list of resources that include books on LGBTQ identity and Christian theology, stories from survivors, a guide for clergy to make their church safer for LGBTQ people, and an online pledge.