“Beautiful Darling” is an illuminating portrait of actress Candy Darling, born James L. Slattery, who as one interviewee aptly states, “made others believe her fantasy.” Her aspirations to become a movie star, like her idol, Kim Novak, came true briefly as she was featured in Andy Warhol’s films “Flesh” and “Women in Revolt” and immortalized in Lou Reed’s song, “Walk on the Wild Side.” Darling also appeared, to some acclaim, in the Tennessee Williams’ play, “Small Craft Warning.”

Director James Rasin traces Darling’s life and career until her untimely death in 1974 at age 29. He intersperses film clips, photographs, and archival footage along with interviews with Warhol Factory folks ranging from Holly Woodlawn and Paul Morrisey to Gerald Malanga and Taylor Mead. He also includes comments by actress Helen Hanft, writer Fran Lebowitz, and filmmaker John Waters, among others.

The insights provided by these talking heads are entertaining even if they are tinged with melancholy. (Everyone seems to agree she was a glamorous star trapped in a harsh reality.) They recount memories and observations about Darling, her love life, her place in popular culture, and the difficulty being trans in the late 1960s/early 1970s, when it was illegal for men to wear women’s clothing in public.

Throughout “Beautiful Darling,” the actress’ friend Jeremiah Newton (a producer on the film) recounts his life and relationship with Candy, and his efforts to bury her ashes (along with his mother’s) in a cemetery in upstate New York. Portions of Newton’s audio diary about Darling are replayed, and he fondly recounts his visits to the Factory and eating in Max’s Kansas City. Other interviews Newton conducted, such as one with Darling’s mother, or with an anonymous former schoolmate, reveal some negative attitude towards Darling.

But it is her letters and diary (read by Chloë Sevigny) that provide the truest sense of what Darling was thinking and feeling. She writes, poignantly, that she was “living in a prison,” and craved affection and attention, never believing she received enough love.

Even if this wistful documentary is crudely made, it should be appreciated by fans of the late actress. “Beautiful Darling” shows just how beloved Candy Darling was.

“Open Up to Me” is an absorbing story about Maarit (cisgender actress Leea Klemola), a transgender woman in Helsinki. One afternoon, when she is working as a cleaner in a doctor’s office, she meets Sami (Peter Franzén), a high school health teacher and soccer coach. Maarit pretends to be a therapist and allows Sami to talk candidly with her about his marital crisis. Her advice helps Sami reconnect with his wife Julia (Ria Kataja) and prompts him to contact her again.

Wisely, Maarit quickly reveals her charade to Sami, but she also confesses her attraction to him. Maarit and Sami briefly knew each other years ago when they were rivals on a soccer pitch. As they have gotten reacquainted as adults, they soon embark on a passionate affair.

Maarit’s behavior may be questionable here, but writer-director Simon Halinen also shows how she becomes embroiled in other complicated situations. She is called in by the police after a student in the town she used to live in killed himself; Maarit counselled the boy who was grappling with his sexual identity. She is estranged from her daughter, Pinja (Emmi Nivala), and tries to reach out to her without her ex’s knowledge. Moreover, Maarit also talks with Teo (Alex Anton), one of Sami’s students, and advises him about sex. Sami feels she is overstepping with Teo, who behaves inappropriately in Sami’s classroom and with Julia.

“Open Up to Me” advocates for people to be honest about their feelings even as the film illustrates how some clear communications can backfire. Maarit bemoans that she works as a cleaner because her bluntness (and likely her trans identity) makes it difficult for her to find a job at her skill level (she was a school counselor). When she and Sami speak their minds during a weekend getaway — they talk about boundaries and respect — trouble ensues. However, this conversation is important for the characters to express what they are looking to get out of their affair.

Klemola is sympathetic as Maarit, even when she behaves badly, and it is gratifying to watch her character become more self-empowered. Although the film is a bit overplotted — the storyline about Teo feels excessive — “Open Up to Me” addresses the difficulties Maarit faces in her personal and professional life with sensitivity and grace. 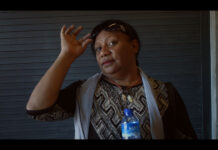