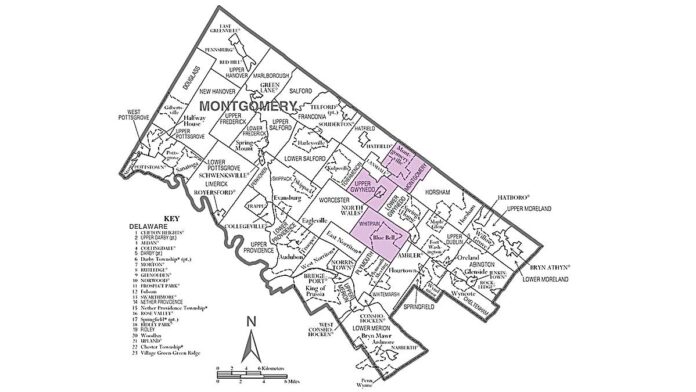 The ordinances in all three townships forbid anti-LGBT bias in the areas of employment, housing, commercial property and public accommodations. They also create Human Relations Commissions that have authority to mediate bias complaints. If mediation is unsuccessful, aggrieved parties may file suit in Montgomery County Court of Common Pleas.

Upper Gwynedd Township is located in the central part of Montgomery County and has about 16,000 residents. Its board of commissioners is composed of five Democrat women who spearheaded the effort, said township manager Sandra B. Zadel.

“The board cares about diversity and issues related to equity in Upper Gwynedd Township,” Zadel told PGN.

Members of the township’s Human Relations Commission are expected to be named within the next month or two. They’ll be residents or business owners within the township, Zadel said.

Montgomery Township has about 25,000 residents and numerous businesses. It’s the ninth largest municipality in Montgomery County, located about 25 miles north of Philadelphia. Its board of supervisors is controlled by Democrats.

So far, two people have applied to serve on the township’s Human Relations Commission. Township officials plan to do additional outreach for more applicants via the township’s website and social-media platforms, said township manager Carolyn McCreary.

Montgomery Township Board of Supervisors Chairwoman Tanya C. Bamford said the board wanted to reassure constituents that Montgomery Township is a safe community. “We wanted to pass the ordinance not only to create this local outlet for our constituents, but to also signal to the marginalized communities that we value and respect them,” Bamford told PGN. “We want to make sure that in today’s environment — which is fraught with a lot of tension — they understand their rights will be protected here in the township.”

Bamford added: “We’re hoping the Human Relations Commission — once they receive their training — will do some educational outreach for local businesses and groups who are seeking more information about this critical issue.”

Whitpain Township is situated about 15 miles north of Philadelphia. It’s one of the oldest townships in Montgomery County, with about 19,000 residents. Its board of supervisors is controlled by Democrats. Aetna, Unisys and Montgomery County Community College are located within the township. Members of its new Human Relations Commission were announced on Jan. 4. The new members are Faith Williams-Hightower, Shannon Cunningham, Alissa Carpenter and Scott Badami.

“We’re very pleased [with the new members],” said township manager Roman Pronczak. “The supervisors are very confident that these people will carry out the mission that was intended when the Human Relations Commission was created.”

Richard R. Buttacavoli, founder of the Montgomery County LGBT Business Council, said the three townships’ actions will encourage local LGBT entrepreneurs and large corporate entities to set up shop in these areas because their customers and employees are protected — especially Montgomery Township, home to the Montgomery Mall and the Routes 202 and 309 business corridor.

“It’s one of the largest commercial areas in our county,” Buttacavoli told PGN. “LGBT people live and commute to work there. Now they’re protected along with folks in Upper Gwynedd, Whitpain, and twenty five other municipalities in Montco. We commend area leadership for doing this and are very proud Montgomery County leads the state in passing these ordinances.”

Chad Dion Lassiter, executive director of the Pennsylvania Human Relations Commission, also praised the townships. “These ordinances are pivotal and certainly a move in the right direction on so many levels and are supported by the PHRC,” Lassiter said in an email. “Historically, there have been lots of social justice and change efforts that have not received fanfare. But nothing can stop a movement towards ultimate justice for all. We remain concerned with all forms of bias that occur throughout the Commonwealth. But we are pleased with these outcomes and commend all three townships.”

Jason Landau Goodman, executive director of Pennsylvania Youth Congress, echoed Lassiter’s remarks. “As a queer person from Montgomery County, I’m immensely proud of our municipal governments for pushing forward,” Goodman said in an email. “Ten years ago last month, I helped lead the successful campaign for the first ordinance in  Montgomery County, in my home community of Lower Merion. With at least 25 ordinances now across our county, a majority of our population has explicit protections on the basis of gender identity and sexual orientation. It’s beyond time for the [Pennsylvania] General Assembly to take action.”