Over the past ten years, the age 65 and over population has been the fastest growing age group in the United States. It was 2011 when the oldest of the Baby Boomers started to turn 65, a significant milestone in the aging services world given the rapid increase to the size of the older adult population and the number of individuals who would begin accessing services from the aging network.

Ten years ago, a group of aging services professionals and LGBT community members here in Philadelphia came together to start a conversation about the experiences of aging within the LGBT community. That group, which would lay the early foundation for the LGBT Elder Initiative, knew that the population shifts coming with the aging of the Baby Boomers meant that more LGBT people would be engaging with aging services providers than ever before. We worried that the aging services network wasn’t prepared for the influx of LGBT seniors who would start to rely on them for care.

We also knew that the generation of LGBT elders before us, who were already engaging with the aging network, were too often receiving services that were not LGBT-inclusive. Older adults in our community often faced the prospect of having to conceal their identities in order to access services. Others encountered homophobia and transphobia in long-term care facilities, senior centers, and homecare services.

A community needs assessment that we conducted in 2010 identified that physical health, emotional wellness, safe affordable housing, social connectedness, and access to LGBT culturally competent services were the greatest priorities expressed by members of our community. The results weren’t particularly surprising. We all hope for good health, strong support networks, and reliable housing. If we redid that survey today, we’d likely see these concerns still register with members of our community. But that 2010 survey did underscore the apprehension within the community at the time that the provider network was not prepared to serve LGBT people and that the lack of LGBT-friendly services would be a significant barrier to care.

At that time, there were only a small handful of agencies who were committed to furthering their LGBT cultural competence and inclusivity. In most cases, agencies and providers simply weren’t thinking or talking about LGBT older adults. Many providers we encountered didn’t believe that they had LGBT people utilizing their services, or expressed that sexual orientation and gender identity were private matters not relevant to the services they provided. There was a large gap between our LGBT older adult communities and the provider networks responsible for caring for us as we grow older.

We’ve also seen great successes at the state level that have spurred progress towards a more inclusive provider network. The Department of Aging’s commitment to supporting LGBT older Pennsylvanians is a complete 180 from their position 10 years ago. The new State Plan on Aging in Pennsylvania is one of the most progressive in the country when it comes to LGBT issues, compared to previous editions that made no mention of LGBT people. The state also now has the Commission on LGBTQ Affairs, launched in 2018, which has made aging a priority area in its legislative advocacy.

As the LGBT Elder Initiative celebrates its 10-year anniversary this winter, it is gratifying to see how far the aging services network has come towards becoming more responsive to the needs of LGBT older adults. There is undoubtedly still room to grow and a lot of work that remains to ensure that the entire provider network is prepared to serve LGBT older adults in ways that are inclusive and culturally sensitive. We need to implement better data collection, expand cultural sensitivity trainings, and enact statewide non-discrimination protections for LGBT older adults in housing and long-term care. We remain committed to pushing this progress forward until we have an aging services network that is affirming and accessible to all in our community. 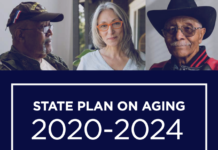 Stories to watch in LGBTQ Aging for 2021