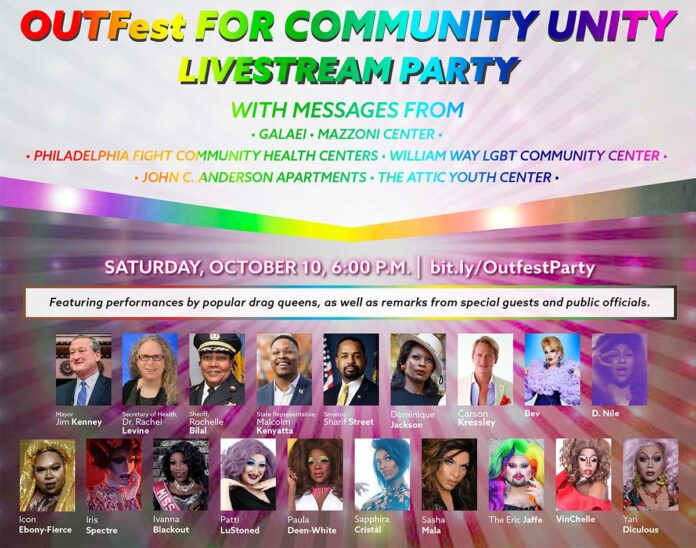 Philadelphia, like many cities around the world, had to cancel Pride this summer due to the coronavirus pandemic. There was hope that in October the Gayborhood would be able to host the annual OutFest, but that hope was quickly dashed when Mayor Kenney cancelled all large public gatherings through at least February 2021. But that won’t stop the community from celebrating and coming together.

On Saturday, October 10th at 6:00 p.m., local organizations, individuals, and performers will celebrate Philadelphia’s LGBTQ community with a 90-minute virtual event called “OutFest for Community Unity.” The livestream will be available to view on YouTube and other outlets, and it will feature a mix of performances, messages from organizations, and individual shows of support for the LGBTQ community.

“This year, the dmhFund in conjunction with PGN has put together a unique and exciting program for Community Unity in our LGBTQ community,” said Judge Dan Anders, who is proud to contribute his time for the event. “Unfortunately, the reality is that online events are the safest way for us to remain together as a community. I hope that next year we will celebrate in person.”

The performance roster is being organized by Philadelphia’s Paula Deen-White, who is working with Anders and dmhFund in organizing the event. The theme for the evening will be “Unity in the Community.”

“I was tasked with creating a theme that was both inclusive and unique, and for that I decided on numbers that exemplified each of these performers’ intersectionality,” Deen-White shared. “[I] felt this theme could be entertaining, informative and touching. I wanted each performer to shine, and give something that could be seen by the audience and elicit a number of positive emotions. I wanted these numbers to allow for the broadest amount of viewers to say ‘I see me in that number.’”

Deen-White was initially reluctant to act as host. So, she extended the invitation to Icon Ebony-Fierce, “to add yet another varied identity to the already diverse cast.” Ebony-Fierce happily accepted the role. Along with the co-hosts, Iris Spectre, Sapphira Cristál, The Eric Jaffe, VinChelle and several other performers will be lending their time and craft to the virtual stage. There will also be special shout-outs from national celebrities.

Along with the performances and messages to inspire and entertain, this year’s OutFest for Community Unity will also serve as a benefit for The Attic Youth Center, which has been helping queer youth since 1993.

“The Attic will be participating by having our youth contribute videos sharing what’s important to them during this time,” said Interim Executive Director Shawnese Givens.

Tito’s Vodka, an affirming ally through sponsorship and direct partnership with contributions, has agreed to match up to $5000 of funds raised for The Attic between now and the October 10th event. The matching donation will be earmarked for developing and maintaining safe spaces for youth to continue distance learning or partake in after-school care. Low-income LGBTQ students often do not have access to what The Attic describes as safe, holistic spaces where they can see themselves reflected in those around them, access resources, and build life skills.

“We are so excited about virtual OutFest for our youth and for this matching opportunity,” Givens said. “Both give us an opportunity to support our young people during these extraordinary times. We will begin promoting the fundraiser this week and hope to reach the goal of $5000. This is a critical moment in history, and our young people’s perspectives and experiences are essential to the narrative.”Many LGBTQ communities have turned to virtual livestreams to help celebrate events this year. This past June, a coalition of Pride organizations around the world hosted Global Pride, which brought together LGBTQ communities in every time zone on earth, and this past August, the Bradbury-Sullivan LGBTQ Community Center hosted Lehigh Valley Pride.