According to LGBTQ Victory Institute’s Out for America 2020 digital report, there are 843 openly LGBTQ elected officials in the U.S. However, in order to achieve representation equal to the population, over 22-thousand more LGBTQ officials must be elected to public office nation-wide, Victory Institute President Annise Parker said in a statement.

“The hateful legislation targeting our community in city councils, state legislatures and at the federal level is a byproduct of this gap in representation,” Parker said. “But when LGBTQ elected officials are in the halls of power, they change the hearts and minds of their lawmaker colleagues, defeat anti-LGBTQ bills and inspire more inclusive legislation.”

In this fall’s upcoming general election, several LGBTQ candidates are running for office in the region. Pennsylvania Democratic candidate Daniel Smith hopes to unseat Republican State Rep. Daryl Metcalf in the 12th district, which includes Cranberry Township in the Pittsburgh Metropolitan area. In the Delaware Democratic primary, Eric Morrison is running for a seat in the House of Representatives in the 27th district. Finally, Sarah McBride faces two challengers for a seat in Delaware’s first Senate district, which spans Wilmington and surrounding areas.

“We know that democracy only works if all of us have a seat at the table, if all of our voices are heard,” McBride said. “The decisions we make and the policies we implement are better when the community has a seat at the table, when our government and our legislative bodies look like the state [or country] we seek to govern.”

McBride’s key issues, which include affordable healthcare, benefits for working families, equal pay and a strong public education system, have only been underscored by the coronavirus pandemic, she said.

“The crisis has, for me, reinforced the responsibility of the incoming legislative class here in Delaware to make sure that we meet this moment with meaningful action that makes a real difference in people’s lives.”

Morrison prioritizes education funding, including reducing administrative staff and allocating more funding to teachers and students, as well as healthcare and addressing infrastructure issues. When it comes to LGBTQ representation in government bodies, Morrison and Smith echoed McBride’s sentiment.

“It is vital that legislative bodies’ members look like and have experiences commensurate with the people they serve — not just to solve constituents’ issues, but even to identify those issues,” Morrison said in an email.

Morrison is challenging Earl Jaques, who has served in the Delaware House for six terms. While Jaques has run as a Democrat, some of his actions have run contrary to the fundamental tenets of the party. In 2013 Jaques voted against same-sex marriage; in 2017 he voted against a bill that would have allowed Delaware to continue providing abortions if Roe v. Wade was overturned; in 2018 he declined to vote on proposed legislation banning gay conversion therapy for LGBTQ minors. However, in 2009, Jaques sponsored a bill to add sexual orientation to Delaware antidiscrimination laws, though it contained some caveats, such as the exclusion of religious corporations.

“We hear time and again that people want things like reform in the areas of public education funding, criminal justice, healthcare, campaign finance,” Morrison said. “Those are things that during [Jaques’s] 12 years in office, he just has not done anything about at all.”

Daniel Smith also prioritizes education reform, specifically working to eliminate state standardized tests in place of using educational tactics catered to the individual school. He also plans to make amendments to his county’s transportation system and keep tax dollars in his community. He added that he firmly believes in the two-year term for local elected officials, and that elected officials should behave more like public servants than career politicians.

While none of these candidates have necessarily positioned their LGBTQ identities at the forefront of their campaigns, they still celebrate their queerness and plan to enact pro-LGBTQ legislation if elected.

“If people know me, they know I’m for LGBTQ rights,” Smith said. “We’ll join Brian Sims and Malcom Kenyatta to finally pass essential discrimination amendments in order to protect people in their jobs. I would consider it a tremendous honor to add to the LGBTQ voice in Harrisburg. But we need more voices over there.”

Smith is facing a very conservative opponent in Daryl Metcalfe, a Republican who just served his 10th term. The Pittsburgh Post-Gazette described Metcalfe as the Pennsylvania General Assembly’s “No. 1 Conservative,” and for good reason. Metcalfe staunchly supports pro-gun legislation, opposes gay marriage and abortion rights, and clocks in at farther than right when it comes to immigration.

“There’s no adaptation on Daryl’s end because he’s old school,” Smith said. “What he fails to realize is that [Cranberry Township] is changing. The median age is 40, and they’re not really liking [his platform]. Not a lot of people know who our representative is. We have to get that out.”

Neither Jaques nor Metcalfe responded to requests for comment.

The same report by LGBTQ Victory Institute also showed that from November 2017 and June 2020, the number of openly LGBTQ elected officials increased by 88%. Within the same time frame, the number of out trans officials rose from six to 26.

“I think that we know that voters are excited to vote for a diverse slate of candidates,” McBride said. “And I’ll be clear, I’m not running on my identity. I’m proud of who I am, and it is an important background that I bring to the table, but I also…bring a lifetime of experience to the challenges we face and the work ahead of us.” 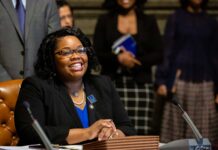