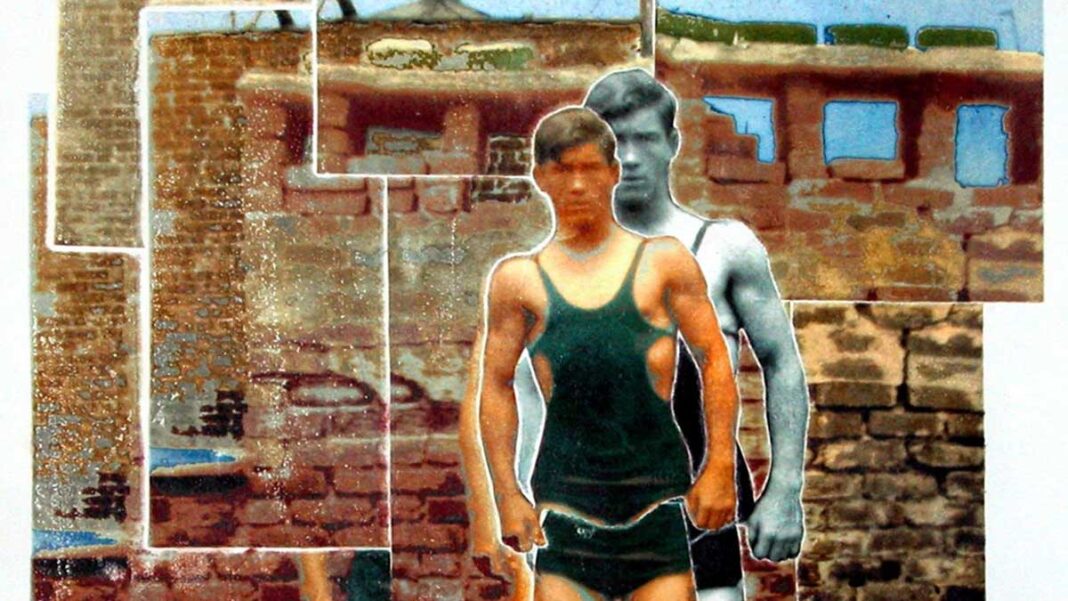 The images, which can be viewed on the website of Allentown’s Bradbury-Sullivan LGBT Community Center until August 31, have a hazy, dreamlike quality. That’s partly due to their provenance. Hübscher, an artist based in the Lehigh Valley, scours local flea markets looking for old postcards and family photo albums with evocative images.

A good example is “Live Now For Shadows Follow.” The main figure is a young man wearing an old-fashioned bathing suit. He’s standing on a rooftop and appears relaxed and happy. He’s looking straight ahead, perhaps towards a friend who snapped the photo.

On second glance, however, things become complicated. Just behind the young man is a shadowy doppelgänger. The image is also fragmented, its various “pieces” fitted together, just like the bricks form the wall in the background.

Despite that, the young man remains attractive. Hübscher’s ability to recognize and celebrate male beauty is likely attributable to the fact that he’s an out gay man. But that’s just one facet of his art. “I don’t see myself as a gay artist,” he explained. “I see myself as an artist who is gay. Because I do a large mix of artwork.”

One part of that mix is Hübscher’s floral photography. Using a digital camera, he takes meticulously arranged shots of wilting flowers set against a backdrop of salvaged wood. In “Artifice on Board,” the flowers have been plucked from their stems and are sitting on a piece of old, dried wood. Although the bloom is fading and they’re shedding petals, the vivid, unnatural colors — which result from dye, digital manipulation, or both — stand out.

These photographs are carefully staged, according to Hübscher. “I’ll move a flower; I’ll move a leaf. I’ll put something in; I’ll take something out. So I’ll go through a hundred, two hundred pictures as I’m doing this, and go through each one later on as I’m editing and decide which one I think brings out the best in what I’m doing,” he said.

In a sense, Hübscher’s floral photographs preserve something that’s vanishing or about to be discarded. A similar feeling is present in his photos of old toys, which he likened to portraits. Separated from the children who originally played with them, the toys in these photos take on a life of their own. Sometimes that’s unsettling. “Clown,” for example, depicts an old piggy bank made of cheap metal. Framed slightly off-center, the fading paint and patches of rust make the clown’s odd grimace slightly sinister.

Hübscher finds these toys on his forays to local flea markets, and they elicit strong emotions. “I’ve always been drawn to the outcast,” he said. “Because I always felt that way growing up.” Reclaiming these old toys, he explains, is akin to saving them. “I guess, in a way, it’s like rescuing them, giving them a new life somehow by photographing them.”

One could say that art rescued Hübscher. In 2000 and 2001, Hübscher said, he hit a rough patch: There was a bad breakup and he was diagnosed with cancer, all just when he’d bought a new house. Shortly afterwards, he lost his job. It was a difficult time.

“My best friend and his husband, who was an artist, showed up at my door with a tabletop etching press and literally said, ‘Here, do something with your life.’”

That artist was Wally Barnette, and under his tutelage, Hübscher blossomed. He began taking art classes, visiting museums, and, most important, making art.

Apparently, Hübscher was a fast learner. Soon after he’d embarked on this new career, his art was included in shows at the Tom of Finland Foundation and the New York City Gay & Lesbian Center. Since then, his work has been displayed at venues like the Nazareth Center for the Arts and the Allentown Art Museum. In 2016, one of his photographs placed second out of 1,800 entries in an international contest co-sponsored by “Juxtapoz” magazine. That same year, his work was hanging on the walls when the Bradbury-Sullivan LGBT Community Center first opened its doors.

Best of all, Hübscher continues to make deeply personal art.

To learn more, visit www.willhubscher.com. To view “Queer During Quarantine,” go to https://bradburysullivancenter.square.site/.