The coronavirus pandemic has forced Pride events around the world to go virtual this year. For Jason Mraz, that means he can, for the first time, take part in the annual summer festivities. After all, thanks to the virus, the “I’m Yours” singer-songwriter can’t tour in support of his latest album “Look for the Good”. Usually, he says, he’s on the road during Pride season.

There really couldn’t be a better time for this album. You couldn’t have predicted that this is where we would be, and yet it feels like this album could have come out of this very moment. Can you talk about your headspace when you decided to write this music and how relevant it is to what we’re going through right now?

In 2016, after the election that year, my heart exploded and I started writing different kinds of songs. I knew that 2020 was going to be another engaged election year, so last year I just started putting all this together. I teamed up with Michael Goldwasser of (reggae collective) All-Stars — he’s a phenomenal reggae producer — and we put a phenomenal band together. We thought, “The sound of reggae and all the different genres inside of it are so danceable and also beloved around the world; let’s make a full album of reggae tracks and at the same time let’s try to breathe life into some issues we care about through these songs and lyrics and offer it to the world in 2020 because we know it’s gonna be heated, we know there’s gonna be debates, we know there needs to be radical change and recognition for many.” We, of course, didn’t predict this level of radical change. But I’m glad to see an uprising. I really am.

I’m not an anarchist, but I am glad to see America getting its education and an invitation for new ways to mobilize, strategize, react, use our resources, use our powers. So “Look for the Good” was intended to be that. It was intended to be this little album of songs that are easy to dance or march to, to remember to stay positive while you’re out there using your voice or your time for the greater good.

With everything feeling so heavy right now, where do you find the good?

And then on the internet, I go for peace. I follow (civil rights activist) Shaun King and the NAACP and I just want to educate myself more on how I can better use my internet resources. I feel like the battlefield for a more equal and just America is not (only) on the streets, it’s also on the internet. Because we’ve clearly seen propaganda come our way to heighten our president and those initiatives, but we also need the propaganda or the internet content and bravery and songs and sharing to heighten the injustices and to advance equality.

Here’s something interesting: about 10 years ago I took a trip to Ghana and I got to visit “the door of no return,” which is what they would call the door that slaves were passed through; if they went through that door they were going to be boarded onto a slave ship and exported out of Africa to either London or the United States. It was an intense place. But the thing that helped abolish slavery was the printing press. This blew my mind. A printing press. Because suddenly now we’ve got newspapers and we can make more people aware of what a slave ship looked like, what humans look like stacked in a boat, and how harsh the conditions are. And it started to touch people’s hearts. And eventually people said, “Enough is enough. Why are we doing this to other human beings?”

So we are experiencing the same thing right now with the level of communication that we have, the many cameras and eyeballs and engaged people we have. We have all these microprinting presses all over the planet exposing the harsh realities and brutalities that people of color and (the) LGBT community as well have experienced. This type of hatred and bigotry. So I feel like this is a huge awakening.

I think music has the power to get through to people when other means of communication cannot. Do you recognize that as a musician?

It’s not as easy to memorize a quote, but what is it about a melody that allows it to sink and stay with us? I don’t know the science behind it, but I’ve been experimenting with it since I was a little kid and it’s a magical phenomenon that we as humans get to experience. It’s a language that transcends the words even. And it’s a human phenomenon. And I’m so thankful that it exists. Imagine if we only had to deal with speeches. That would be a miserable existence.

The journey of you being an out public figure took some time. I was looking back at some of our conversations and you dropped a couple of hints. In 2010, you told me you didn’t like feeling another man’s facial hair on your skin. And then in 2012, you said you’d been asked to join in on a threesome with a couple but it wasn’t a reality at that point. And then, in 2018, we got the news that you were bisexual [via a Pride Month poem Mraz wrote for Billboard]. Why, at that moment, did it seem like the right time to come out as bisexual?

I wanted to be careful (because of) my family, which is probably a struggle a lot of people have. And when I say this, it’s not because they wouldn’t love me for who I am. I was afraid to say who I was when I was younger. I was afraid to explore it because I thought exploring it was the wrong thing to do because of things I heard when I was growing up and because of how I saw society react to the LGBT community. So I thought if I go down this lane, I was taught that it was not a good path. And so for me to come out and say I was taught that that’s not a good path is potentially causing harm to my mother who raised me well, so I never wanted to put her in a position that made her feel or look like a bad parent. Same to my stepfather or my stepmother or my father. I had four parents. They’re not all to blame. I’m not going to throw any of them under the bus.

So it was just growing up in a kind of community where I didn’t feel safe to go down that path and explore some intuitions that I had. So I closeted it. I suppressed it. I put it aside. And as I go through life, and as I started having experiences, it’s in my programming, it’s the systemic issues of going through life and thinking, “This is not healthy.” But the more I went through life and the more I became supported and supportive of the LGBT (community), I realized I was safe, I was home, and enough is enough.

Silence doesn’t do anybody any good. And it wasn’t doing me any good. It wasn’t giving me the opportunity to have more of the experiences I wanted to have in my life. And as I was getting older, I thought, “Jesus, am I gonna waste my whole life on fear? Or can I step into this and be proud of who I am and see where this takes me, see where this journey takes me, see what kind of new friendships I form, see the level of love that I’m capable of that I’ve not given myself permission for?” That was my journey.

Honestly, I thought, “I’m gonna have to wait until my parents leave the planet before I get to be who I am.” I didn’t want that. I wanted them to see who I am while they’re still alive and I want to be who I am while I’m still alive. It gave me even more empathy and more compassion for those who are taking that journey every day, and for the out community who just lives bravely in this world every day. So it was time for me to come out. If I was really going to use my superpower for good, it was time for me to start addressing who I am, because authenticity is the new reality.

What message do you want to send out to the LGBTQ community? Because Pride is different this year. We’re going virtual. A lot has changed.

Just because it’s going virtual does not mean that Pride is still not a protest. And the battlefield is not just on the streets, it’s on the internet; it’s amplified when our voices come together. So my message to people this year is to keep going and go harder than ever. I honestly feel like what’s going on in the world is getting closer to the Equal Rights Amendment and that’s been a long time coming. The last time the Constitution was amended and ratified was in the ’90s and it had to do with Congress’ salaries. Who gives a fuck about that? So I think what’s really heating up is going to get us closer to the Equal Rights Amendment. So my message to Pride is, even though we may not be in the streets, go harder than ever. And who knows? This thing might spill over into the streets anyway because the internet can’t hold us. It can’t.

This interview has been condensed and edited for clarity.

As editor of Q Syndicate, the LGBTQ wire service, Chris Azzopardi has interviewed a multitude of superstars, including Cher, Meryl Streep, Mariah Carey and Beyoncé. His work has also appeared in The New York Times, Vanity Fair, GQ and Billboard. Reach him via Twitter @chrisazzopardi. 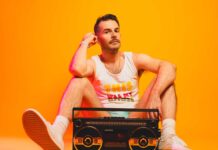 A Bright Light in the Dark 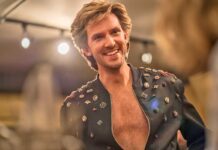