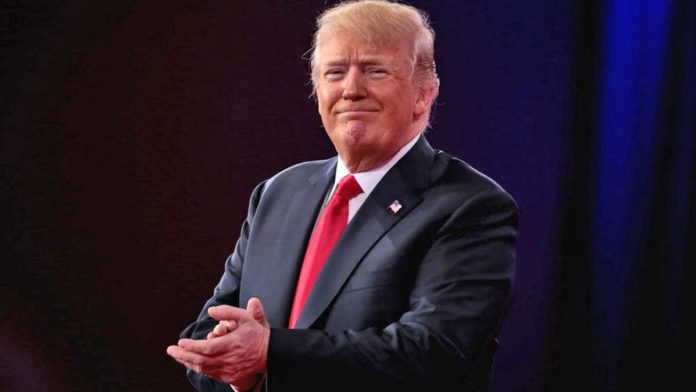 I’m old enough to remember when the President of the United States wasn’t an incurious moron recklessly obsessed with his own image. And this is the man is in charge during the worst public health epidemic in recent memory.

As I write this, it is Memorial Day, a day when we remember military personnel who have given their lives for this country. It’s an especially odd and disorienting Memorial Day because of what we are NOT mourning: the 100,000-plus dead that this virus has killed in the U.S. just since late February.

The president is, of course, being appropriately respectful, tweeting this morning, “On Memorial Day, we honor those who gave all for us. That takes different forms this year, but it’s even more vital with the loss of so many veterans to COVID-19. The way they lived, in service to one another, should be our roadmap in the months ahead.”

And by president I, of course, mean Barack Obama.

Donald Trump has a much different take this Memorial Day. He tweeted, “Great reviews on our handling of Covid 19, sometimes referred to as the China Virus. Ventilators, Testing, Medical Supply Distribution, we made a lot of Governors look very good – And got no credit for so doing. Most importantly, we helped a lot of great people!”

But please, tell me again how both parties are the same.

Great reviews? Over 100,000 people dead and Trump is still trying to pretend that his handling of this epidemic was, like his call with Ukraine, “perfect.” His response has been a horror show of incompetence lacking even a shred of empathy.

“Sometimes referred to as the China Virus,” huh? Gosh, who calls it that? Oh, yeah, Trump does, because he’s racist, and his supporters do, because they’re racist.

Re: his mention of “Ventilators, Testing, Medical Supply Distribution,” it’s not clear if he’s putting those in order from most fucked up to least fucked up or the other way around.

He continues, “We made a lot of Governors look very good – And got no credit for so doing.”

It is true that Trump made a lot of governors look good, because Trump set the bar so unbelievably low and the federal response was so chaotic and lacking that even the shittiest governors managed to look better than the president. Here’s looking at you, Florida Gov. Ron DeSantis and Georgia Gov. Brian Kemp. You are both terrible and your inaction surely led to thousands of your residents to get sick and die, and yet Trump manages to be even worse than you.

Finally, Trump ends his tweet with, “Most importantly, we helped a lot of great people!”

And that’s true. Granted he managed to NOT help a whole lot of people. But that doesn’t mean he didn’t help anyone. I mean, a poorly managed program getting PPE to hospitals is better than NO program, right? Maybe? I mean, except in the cases where hospitals were trying to buy their own PPE and the federal government literally seized those shipments or outbid local agencies. That was probably not helpful.

The problem is, Trump is helping a whole slew of not so great people. Those people are refusing to wear face masks and are sick and tired of all these people dying and keeping them from their freedom to rock a Confederate flag bikini at their local pool.

Besides, how bad could this while virus thing be, anyway, when Alpha President Trump doesn’t wear a mask. Not even when he tours a Ford plant in Michigan where Gov. Gretchen Whitmer, Attorney General Dana Nessel and the folks at Ford all asked him to wear a mask. But he didn’t. At least not for the cameras to see. He didn’t want to give the press the “pleasure” of seeing him in a mask.

And, hey, I get it. Trump wearing a mask after calling the virus a hoax and saying it would magically “disappear” is bad optics. It looks bad for Trump to acknowledge reality. Any reality, because there is no realm of reality in which he is a good president or even a halfway decent human being.

But, man, he sure showed those reporters in Michigan, eh?

And so now as states are starting to loosen their restrictions — a loosening that is a direct result of most people following stay-at-home orders and practicing social distancing, mask-wearing and hand-washing — we’re seeing a flurry of militant morons refusing to wear a mask and harassing people who do wear masks.

On Memorial Day, it’s a good idea that while we mourn the dead and celebrate freedom, the intention was never to celebrate your right to spread a deadly virus or your right to pretend that science is witchcraft. Not wearing a mask is a great way to communicate with people, “I don’t care if you die.” No wonder Trump won’t wear one.