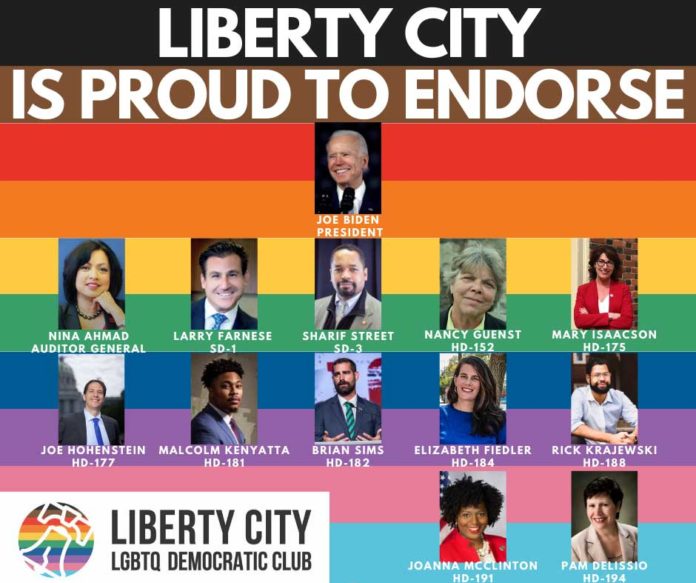 The Human Rights Campaign (HRC) announced endorsements for the 2020 Democratic primary that are in line with candidates endorsed by the Philadelphia-based Liberty City LGBTQ Democratic Club. Agreement between the HRC and Liberty City demonstrates a united Pennsylvania Democratic party in terms of choosing candidates that hold progressive and LGBTQ issues as integral to their political platforms.

Wade Albert, who sits as endorsement committee chair of Liberty City, explained how the endorsement process works. “We seek to find candidates who support our issues,” said Albert, “to endorse them, and also connect members of the LBGTQ+ community with opportunities for political activism.” First, the board invites candidates to participate in the process. Then, the committee drafts a questionnaire designed to determine how progressive the candidates are. “[For example],” said Albert, “we want to make sure we are supporting candidates who are pro-choice, candidates who are in favor of the Black Lives Matter movement, and myriad other progressive causes.”

Fortunately, Liberty City was able to hold two events before citywide closures took effect in which candidates could introduce themselves and field questions. After these events, said Albert, the committee recommends candidates to their membership. Though, Albert was quick to explain that Liberty City is democratically run and endorsements are merely vetted suggestions. “We recommend candidates, but it’s up to the membership to vote on whether to endorse or not,” said Albert, “It’s an independent organization that supports the Democratic party, but we are independent of the Democratic party. Our members frequently support the candidates the board recommends, but they have every opportunity to say ‘No, we disagree with your committee and we are going to endorse somebody else or not endorse anyone at all.’”

Gregory O. Yorgey-Girdy, co-chair of Liberty City, said that the actual voting process was completely virtual, a first for the organization. For members to vote in the endorsement process, they historically had to attend at least two events and be dues current. Because the voting bylaws were relaxed and the process was streamlined online, Yorgey-Girdy was surprised to find a 20% increase in membership participation. Both Liberty City and HRC announced their endorsements this week.

For Pennsylvania’s District-1 Senate, both the HRC and Liberty City endorsed Larry Farnese. “I have been a proud advocate for LGBT+ rights for over a decade in Harrisburg,” said Farnese, “and so I am honored to receive the endorsement of the Human Rights Campaign for State Senate. Now, more than ever, we need to fight to ensure that all Pennsylvanians are treated with equality and dignity.” Liberty City additionally backed Sharif Street for District-3 Senate.

The HRC endorsed out candidate, Jessica Benham, for District-36’s Pennsylvania House representative. “As potentially the first out LGBTQ woman elected to PA’s state legislature,” said Benham, “I’m honored to have this endorsement because of the work the HRC does in advocating for LGBTQ equality. I look forward to helping make our shared vision of reality in Pennsylvania.”

“I think we have a pretty strong slate of candidates that we endorsed,” said Albert, “I’m really happy with the fact that it is a diverse cross-section of the city…. That’s one of the strengths of Liberty City is that we want to make sure we’re representing the broader community because we understand that the LGBT community itself encompasses people of every single demographic — young, old, all races, all religions, rich and poor. It’s important that our candidates reflect that.”