When PGN last caught up with Zachary James, the out bass was preparing to make his Metropolitan Opera debut in the company premiere of Philip Glass’ “Akhnaten.” Although he was cast in the non-singing role of Amenhotep III, James, a South Philly resident, made a strong impression on critics and audiences alike. Classical Voice North America declared that he “found sense, purpose and emotional underpinning” in the text, while the New York Times praised his “chilling intensity.”

James’ first engagement at the Met capped an exciting season that included a choice supporting role in Opera Philadelphia’s “The Love for Three Oranges” and a role debut as Don Giovanni with Wilmington Concert Opera. Unfortunately, many of his pending engagements have been postponed or canceled due to the ongoing COVD-19 pandemic. But that has not stymied this singer’s creativity. Next week, James will participate in Kamala Sankaram’s “all decisions will be made by consensus,” billed as the world’s first Zoom opera and written to reflect this particular moment in history.

PGN spoke with James about the project and how he’s staying sane through these uncertain times. Some responses have been condensed and edited.

I know this is a difficult subject, but can you talk a little bit about how COVID-19 has interrupted your professional schedule?

This is day 34 at home for me. I was 10 days out from opening a world premiere opera at Minnesota Opera in Minneapolis. We showed up for our final rehearsal in the studio before moving to the stage when the company leaders informed us that we would be canceling and sending everyone home. We were expecting that, but we were just hoping to get to opening night. From that point, I wasn’t really comfortable flying, so I rented a car and drove straight home to Philly. I’ve been home ever since, and in the weeks following that cancellation, I’ve had all my April and May concerts and operas canceled. I even lost a concert in September, and I’m currently waiting on a summer festival to cancel. It’s been really brutal, but a week after I got home, I had a friend in the ICU in New York, and it looked like he might not make it. That’s when perspective really shifted — like, all of this is really sad, but people are dying.

On a happier note, how did you become involved with this Zoom opera?

Kamala Sankaram is a friend and colleague. We’ve worked together quite a bit, and we’re actually planning a collaboration at Carnegie Hall in the fall that will hopefully happen. She reached out and said she was doing this experiment, and she asked if I wanted to be involved. I said of course, because I love her music. The idea of putting on a new opera over Zoom was very intriguing. It’s a 15-minute piece, and it’s been written very smartly, tailored to the particular challenges of Zoom. The setting of the opera is a Zoom meeting, so our blocking is camera-on, camera-off. We just finished our second rehearsal an hour ago.

What has it been like to rehearse remotely and electronically?

The bulk has been technical, trying to get sound and video sorted out. Everyone has a different microphone, and some people don’t have an external microphone. We figured out that everyone needs to wear certain headphones. The first week of rehearsal has mostly been sorting that out. Everyone knows the music — we’re all opera singers who are used to learning things quickly. That’s been the easy part. Those who are quote-unquote “onstage” have our videos on, but our director has been on audio only, speaking to us. What we see on screen is what the audience will be seeing as well.

There’s been an explosion of streamed content since the start of the pandemic. What do you hope audiences watching at home will take away from this?

I hope for a few things. First of all, just an entertaining experience. I hope people can identify with the experience we’re presenting, since we’ve all been living on these Zoom meetings. There’s just things that happen on Zoom that are represented really well here. Maybe someone will get a laugh out of it, and all laughs are needed right now. Beyond that, just industry awareness — we’re all here, we’re all home, but our creativity lives on and we’re trying to figure out what to do with that. There have been some calls asking artists to stop creating and be reverent of the moment. For some people, that’s right. But some people still have the drive to create, and that’s great too. Our audiences are very, very hungry. People are reaching out nonstop. Companies are streaming old performances. Everyone’s at home, and everyone needs entertainment right now.

Lastly, aside from work, what are you doing personally to help stay well?

I’ve been watching a lot of TV and film, which is something I always do anyway. Beyond that, I’ve been cooking and maintaining a clean environment. My boyfriend works at the hospital at Penn, so I try to make sure things are peaceful when he comes home. I’ve been creating some content, what I’ve been calling the “Quarantine Karaoke Lounge,” by doing a song a week and putting it on my Instagram account. People really appreciate it, and the songs are specifically chosen to send different messages that are needed right now. I hung a piece of fabric, put on a tuxedo and put a flashlight on my staircase that shone like a spotlight. It actually felt like being on stage, and to feel light on my face was good for my heart. To be able to sing and share myself as I’m used to doing, which is my normal life, was good for me too.

“all decisions will be made by consensus” will be streamed live via Zoom on April 24 (1 p.m.), April 25 (7 p.m.) and April 26 (3 p.m.). The April 24 performance will also be streamed on HERE Arts Center’s Facebook page (www.facebook.com/hereartscenter). 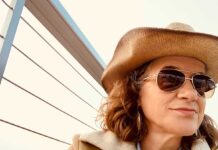