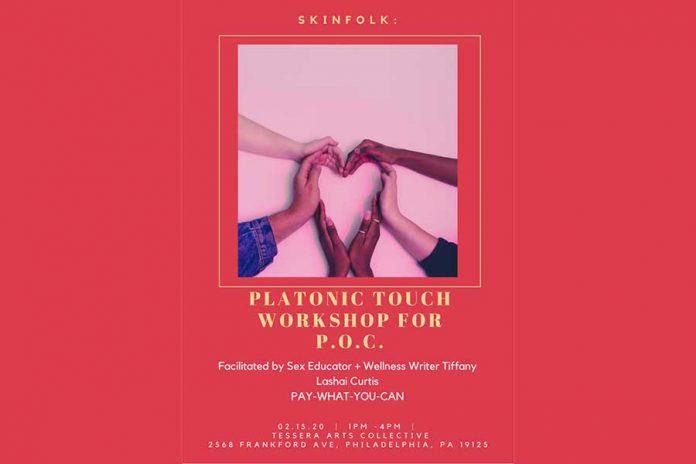 After attending Sex Down South, a sexuality conference centering people of color, Black queer femme Tiffany Lashai Curtis envisioned creating a platonic touch circle. Inspired by a platonic touch space for people of color facilitated by Dalychia Saach, sex educator and co-founder of Afrosexology — a community and movement dedicated to educating, exploring and reclaiming Black sexuality and promoting Black self-empowerment through sexual liberation — Curtis wanted to create a similar space for folks of color in Philadelphia. And she is doing just that.

On Feb. 15 from 1-4 p.m., Curtis will hold “Skinfolk: Platonic Touch Circle” open to folks of color over 21 at Tessera Arts Collective, a space owned and operated by A’Driane Nieves. Tickets must be purchased in advance, are “pay-what-you-can” and include admission for two. Curtis wants to offer an accessible space for healing and for folks to come with someone with whom they feel safe.

A sex educator and writer — with stories published by MTVNews, Refinery29 and The Philadelphia Inquirer — Curtis focuses on the sexual liberation of people of color and also overall wellness, centering on vulnerability and intimacy in all types of relationships.

Curtis said the idea of platonic intimacy appeals to her because millennials use apps to connect with people but are often starved from touch. She relayed that she has seasonal depression during the winter, so she’s often in need of touch that isn’t centered around sex. With so much societal emphasis on romantic love and sexual intimacy, Curtis wondered where people who crave platonic touch go to meet their needs and how could she increase platonic intimacy in her life. Curtis said, “I heard of cuddle parties before, but I never knew if that was something I would feel comfortable at, so I wanted to have a space where people can engage in different levels of consensual platonic touch, with a partner that they know.”

Her hope for this event is to offer an intimate healing space for folks of all genders and orientations, so they can engage in platonic touch intentionally and with care. She wants to offer folks locally the experience of giving and receiving platonic touch in a nourishing manner.

Curtis said because Valentine’s Day is a loaded holiday, she wanted to hold her event the day after. Platonic love and partnership aren’t often talked about around this time; there is often an emphasis on romantic love and the pressure to engage in romance in February more so than other months. With this circle, Curtis hopes to normalize platonic intimacy within people’s lives and educate folks on the benefits of platonic touch, reflect on their relationships and ask for their needs around touch.

Curtis said, “I originally marketed this event as an event for women and femmes because I thought about how so often we are the ones who nurture and perform emotional labor for others. But after thinking about it and talking about it with friends, I also acknowledge that any gender identity can possess feminine energy and find themselves in the role of caring for others,” so she opened the event to all folks of color.

Curtis added, “I want people to come with an open mind and the willingness to be vulnerable with themselves and whichever kind of partner they choose to bring.”

If this event goes well, Curtis said she would like to “recreate it for different groups of people and have one where anyone can come, regardless of race or identity.”