“Chess the Musical” flopped on Broadway, closing after just two months in 1988, but it has lived on as a cult classic ever since.

Subsequent productions have featured some of the biggest names in musical theater, including Josh Groban, Idina Menzel, Sutton Foster, Adam Pascal and Michael Ball. Songs like “Anthem,” “Pity the Child” and “I Know Him So Well” are commonly heard at showcases and auditions. Legions of devoted fans still flock to see the show, which chronicles a contentious Cold War chess match between a cerebral Soviet and a brash American.

11th Hour Theatre Company will present a new staging this month, featuring trans actor Jack Henry as Freddie Trumper, the hotheaded American chess master. A University of the Arts graduate, Henry has appeared with many of the region’s top theater companies, including the Arden, Wilma, Azuka and Theatre Horizon. He is equally at home in drama and as a musical theater performer.

PGN spoke with Henry about the expectations of performing musical theater, the kinds of characters he’s interested in playing and the trans representation he wants to see on stage. Some responses have been edited for clarity.

Did you have a connection to “Chess” before you were cast in this production?

I did not. I just knew a few songs from theater school. I think the show is wild, and I think it’s one of those things where you’re like, “Wow, did we all agree on this?” You sort of have no choice but to jump on board and do it, because it’s really fun.

How do you approach finding the character of Freddie?  Freddie is the little piece of cruelty that we all have in us. To be able to get to release a little bit of my own through him is a pleasure. We use anger and aggression to cover our wounds because we’re afraid someone is going to step on them all over again. Freddie is the part of us that will do anything to protect your secrets.

What do you think is the main difference between performing in musical theater and drama?  I don’t think the approach is different. I think I have extra help in musicals. You have music. You get magic with the music. Plays are a different thing, and you have to rely on a different kind of magic. Music is just a really powerful way to communicate. The approach isn’t different, but I’m just more used to different kinds of magic.

The music in “Chess” is so much of its moment. Is working on a score like this different from performing more contemporary musical theater?  There’s a moment when you’re not sure if you’re going to jump on board — and then you sort of say to yourself, “Oh, why not?” It is such a vehicle of its time, and that’s fun to do.

At this point in your career, what are the kinds of roles you’re attracted to?  There are several kinds of characters I want to play, and there are some that I haven’t invented yet. I feel like I’ll probably invent a few. One brand of character that I really like to do was actually written by my playwright friend Val Dunn, in a play called “Down in the Holler” that PlayPenn did a few years ago. The character I played was sort of like a catalyst outsider, which is a role I’ve played before, but it was different, and it was special. The characters I am particularly drawn to have a lot of hope in them, and this character’s magic was that even when things turned out different from what she wanted, she could spin them and make them magic. I recently played Jack in Theatre Horizon’s reading of “Into the Woods.” Jack believes in magic too. These characters are full of hope, and they don’t always know what they’re going to do, but they really think it’s going to turn out OK.

As a trans performer, what kind of trans stories are you excited to tell?  Honestly, I’d like to see more trans characters who are just trans. That’s not necessarily part of the story. The normalization of transness would be a really nice thing to see more and more of — just existence in a way that feels as much as you would see a cis person.

Do you have anything coming up after “Chess”?  I do have something, but I haven’t signed a contract yet, so I can’t talk about it. I’m also working on a solo piece called “Liminal Moon,” which is a party, a TED Talk, a performance, a museum and a ritual where you’re invited to be between whatever you are between. It doesn’t currently have a home yet, but it is in the works and being submitted to places. 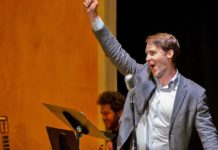