“Latter Day Jew” is a witty, breezy, but also serious documentary produced by out Philly native Todd Shotz about H. Alan Scott, a 35-year-old gay Mormon who converts to Judaism and prepares for his Bar Mitzvah. The film will screen Nov. 16 at the Suzanne Roberts Theater as part of the Jewish Film Festival.

In the documentary, Scott takes a road trip in search of community and belonging to learn to be “the best Jew possible.” From meeting out comedienne Judy Gold in New York City to attending Tel Aviv Pride in Israel, Scott learns what it means to be a Jew and become a man.

You recount your experiences being a Mormon, surviving cancer, being gay and finding your Judaism in a stand-up routine in the film. How did you find the right balance to tell your story with both irreverence and solemnity?

I do everything through comedy. I think everything — even drama — is comedy, in some way. That’s how I communicate. I do think it’s delicate when you talk about cancer or religion, but I think everything fundamentally can be made funny. Humor is the best way for me to tell the truth, but that can get me in trouble too. In terms of finding the balance and understanding what to not be funny about or take seriously — that was a struggle. I’m used to being fun and silly to make people feel good. When Aliza [the director] pushed me to be emotional, it wasn’t easy — those were waters I’d not navigated before.

I love that your Bar Mitzvah is expected to be “the most dramatic ever” — and there are some dramatic moments! What observations do you have about “becoming a man”?

[Laughs]. I always had problems with the idea of “becoming a man.” That’s not in the film, but we had discussions about it. I [believe] that gender is a construct; I’m not qualified to explain that. The whole journey was not just figuring out what kind of Jew I am, but my purpose in the landscape of Jewry. I was a convert because it felt right. It was not for marriage or end-of-life issues. I was an anomaly. You get a sense that you don’t 100 percent belong. I don’t have a Jewish history or lineage. The Bar Mitzvah was a point where I realized my purpose in the Jewish landscape. It’s talking and communicating and telling complex stories to think and laugh and show there are so many different types of Jews in the world. If we embrace all those different types, we’ll have a stronger community.

You have complex discussions with trans author and activist Yiscah Smith about the responsibility, purpose and meaning of being Jewish. What can you say about how her teachings impacted you?

Yiscah, by far, had the biggest impact on my life because she personifies so much of what it means to be Jewish today — growing into the person you are meant to be, and allowing the community to accept that person. I was looking for that acceptance and peace that she found. I was raised Mormon, and while it was liberal, it’s conservative to liberal families. In converting, I needed to find a connection to who I am deep down, and Yiscah showed me you can be uniquely yourself in your own truth while also being in service to the community you are faithful to.

You have a very touching scene with your mother, who is accepting and loving. Does she give you guilt like a Jewish mother?

She’s not like a Jewish mother at all! She’s a Midwestern white person who doesn’t express feelings. I was the loud, showy one, and I did express my feelings. Mom has grown over the years. She’s more expressive in her feelings and what she thinks. I do think she has a Jewish soul in her, but she hasn’t converted and doesn’t want to convert. I’m grateful she allowed me to choose my own path and follow what’s right for me. 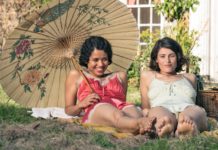 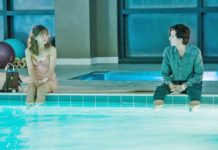