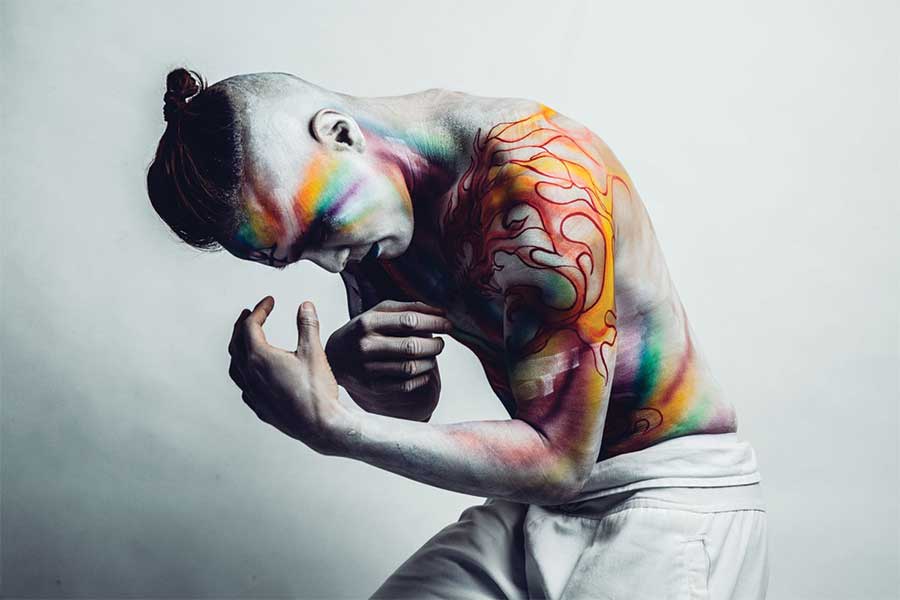 Out yoga master and world traveler Johnson Chong planned on writing a short guide about self-empowerment, but the end result of his efforts was a full-length book, “Sage Sapien: From Karma to Dharma,” full of deeply personal anecdotes detailing his journey of spiritual exploration, self-acceptance and liberation.

The son of immigrants who fled communism in China and relocated to New York City, Chong endured beatings at the hands of his mother and acted out as a frustrated youth struggling with his sexuality. He went on to study with yogic mentors and ultimately open his own meditation studio in Singapore.

Speaking during his recent trip to New York, Chong said recounting the details of his tumultuous upbringing and troubled past while writing this book wasn’t something that he considered painful.

“I don’t have relationships with that trauma anymore,” he said. “If you asked me maybe six years ago to go to that place, I probably would have been not as ready. But because I’m in a different place now, I can see that these were my old stories, but it also feels like they are not mine…. It’s almost like an actor playing a role. If you are playing a character who has gone through a lot, it’s like you go through the emotions of that character but you don’t go home with all that baggage.”

Chong said that the transition from a rebellious youth trying to find himself amid the social and familial chaos of New York City to a spiritual guru was a “gradual process,” but eventually, he found himself in a place where he could guide people toward physical and mental balance and self-acceptance.

“It was a slow unraveling over time of lessons I’ve learned and picked up along the way,” he said. First, I started off in the physical domain of mind and body wellness, teaching yoga and pilates. As I started teaching the physical health benefits of positions, I started to realize there was so much more under the physicality of yoga. I started to understand that there are a lot of mental and emotional blocks. Now I’m less interested in only doing physical training with people. If you have issues with hamstrings or your spine, great. I can work with you biomechanically. But that is not as interesting to me as it is to explore what is underneath the physical layers.”

These days Chong spends most of his time living and working in Singapore, where he teaches pilates, yoga and meditation. Moving from New York City felt necessary to Chong, and although he said Singapore poses a unique set of challenges for a gay man, it also feels like home.

His road to Singapore wasn’t necessarily linear. He said he didn’t plan on going there but knew he “had to get out of New York,” which provoked him to first take a six-month teaching job in India — the Himalayas. After that was complete, he said, “I wasn’t ready to come back. I was offered a teaching job in Singapore by a woman I had met in India and that’s what brought me over there. I didn’t know anything about Singapore. It wasn’t until I got there that I was like, ‘What am I doing here?’ But then I met my partner. Life kind of happened. I fell in love, and its two-and-a-half years later.”

“I’ve been in the States now for five days, and I come back every year or year and a half. The one thing I notice that is very different is that it’s very polarized in the United States. There’s a vast difference in idioms across the board, Democrat and Republican, hard right and hard left. There’s always this push and pull. It’s a tug of war. In Singapore, politically they’ve been dominated by the same party for the last 54 years. It’s very conservative. On an infrastructure level, it gets things done very quickly. It is financially very stable to be there. Culturally, it’s a little bit more repressed.”

He said that, in its own way, Singapore is a melting pot, even with the significant Chinese influence. It’s a “high-tech, high-speed city-state country” no bigger than New York City, and while it wants to be a Western power, Singapore has policies that are more traditional and family-focused, while homosexuality remains illegal.

“Even though that is not enforced,” he said, “you can see how it affects the culture. People are not as open. People are very private and keep their opinions to themselves. Whereas in the States, you can be very loud about it. People have rallies and protests. That’s the main difference.”

Still, Chong said Singapore has been “very stable” for him. “There are definitely a lot of people that are hungry for awareness.”