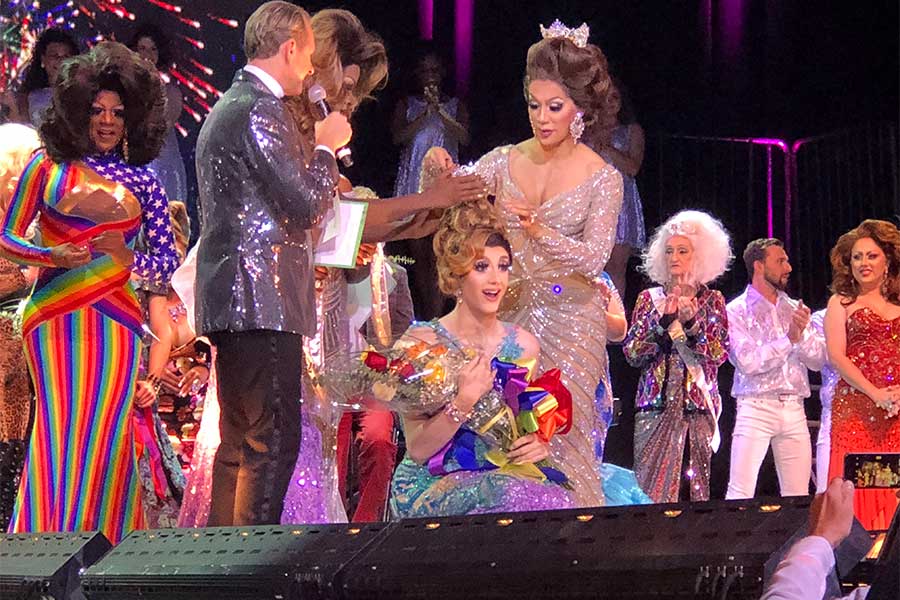 The annual Miss’d America Pageant is returning this year to a new location at Hard Rock Hotel and Casino. In the spotlight will be reigning Miss’d America 2018 winner, Adriana Trenta, perennial host, Carson Kressley, and special guest performer and singer Frankie Z.

Since returning to Atlantic City from Vegas in 2010, the event has been held at a variety of venues, most recently, the Borgata. Richard Helfant, president of the Greater Atlantic City GLBT Alliance and executive producer of the pageant, said that differences with the Borgata prompted this year’s move to Hard Rock.

“There were some rules within our organization, some contested rules, that the previous host hotel felt were not within the lines of what their thinking was,” Helfant said. “They wanted us to change the contestant rules to suit them, and that is not something we can do. We have to remain who we are. We’re an all-male drag pageant. That’s how it was created and trademarked federally. The Borgata felt that we weren’t a good fit for them, and we parted ways amicably…. The Hard Rock graciously rolled out the welcome mat for us, and we’re excited to be back on the Boardwalk.”

When asked about the policy that doesn’t allow trans drag performers and those not identified as “male” to compete, Helfant said it is has everything to do with the pageant’s long-standing definition of the term drag.

“The last thing I want to do is sound like we’re alienating the trans community or anything like that because that is not the intent here,” he said. “Our pageant was founded as a drag pageant and just by sheer definition a drag queen is a guy dressed as a woman. Throughout its 28-year history, that is what the audience draw has always been; people who pay to laugh and be entertained by these guys who dress up as women. The pageant is in fact federally trademarked under those conditions — that the contestants are men.”

Helfant emphasized that pageants have rules about who is and who isn’t eligible to compete.

“There are certain things that are exclusive to certain people,” he said. “Is Miss America being discriminatory because they say you have to be a woman? Nobody would say that. You can’t be a man and compete in Miss America. You can’t be over 26. You can’t ever have been married or have had kids. So, there are lots of conditions that they have on their contestants. For us, it’s a very difficult position because I don’t want the show to be compromised and yet I don’t want to offend anybody.”

Helfant also said that this is the first time in the pageant’s history that not allowing transgender contestants has become a sticking point.

“This is the first year that this issue has surfaced in the 28 years that we have been doing the pageant,” he said. “It hasn’t been brought up, ever. The rules have been the rules since day one. We changed the rules this year to make them easier to understand and not as overbearing. We consulted with our reigning Miss’d America, Adriana Trenta, who is very involved in the drag community in New York to help us reword the rules in the contestant packet as it relates to the requirements to be a contestant. A lot of the verbiage that we are using, we borrowed from Miss Gay America, which is a much bigger pageant than we are. We painstakingly went through as much as we could to try to make it as reasonable as we could without changing the direction of what the pageant is. They are guys and that’s how the pageant was designed. Any change to the pageant would violate our federal trademark. Down the road, if the transgender community wants to do a pageant, awesome. I’d help them. But that’s not who this pageant is.”

A least one former Miss’d Pageant participant feels differently about the pageant’s stance on its rules of eligibility. Mimi Imfurst aka Braden Chapman, who was crowned the winner of the Miss’d Pageant in 2016, believes that it’s time for the pageant to embrace drag performers of all backgrounds.

“The Miss’d America pageant has done an incredible job raising much needed money for the LGBT community,” Chapman said. “That being said, I can’t believe this is still something that is an issue in 2019.  Drag is drag regardless of your body.  The contributions to the drag community by trans, genderqueer and nonconforming people have been undeniably at the core of what drag is.  By writing this statement I am aware that I am jeopardizing my relationship with the pageant organizers, however when I won, I spoke during my Q&A portion of the pageant about creating change using your voice, and I feel like if I didn’t speak up for trans drag performers, I would be doing a disservice to what the title of Miss’d America represents.  Hopefully, the organizers can recognize that it is time to do the right thing and recognize that audience members will embrace inclusion, celebrate it, and I suspect [the pageant] will raise even more money for the community.”

Helfant said that outside of the controversy that has come to light, for the time being, Miss’d Pageant will remain the outrageously entertaining spectacle it has always been.

“We poke fun at and mirror Miss America, which is how we were created,” he said. “We still have a swimsuit competition, even though they don’t. Then we have the evening gown competition, the talent competition and the Q&A competition. So, we pretty much follow the same pattern as Miss America.”

“We’re really excited to be in the Sound Waves theater at the Hard Rock.”