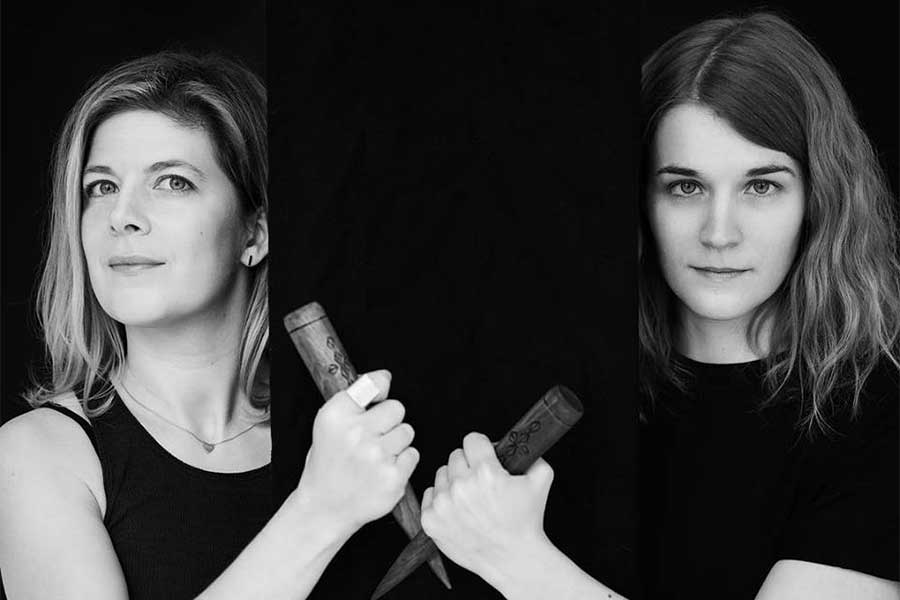 On September 26, 2000, Buffy Summers faced off against Dracula on the television series “Buffy the Vampire Slayer.”

On September 13, 2019 — nearly two decades after the episode aired — Kristin Russo and Jenny Owen Youngs will bring their trademark banter, sense of humor and queer-feminist analysis to the episode during a sold-out live taping of the duo’s Buffy-rewatch podcast, “Buffering the Vampire Slayer,” at World Cafe Live.

After a four-month hiatus, the hosts return to podcasting platforms to discuss the television series’ fifth season. Russo and Youngs hosted live tapings in several cities during the podcast’s previous seasons, but the taping of “Buffy Vs. Dracula” — the season five premiere — marks the first time in Philadelphia.

“Philadelphia has been a loud city since the very beginning,” Russo laughed, noting the podcast’s fanbase in the area.

“We’re giving the people what they want,” Youngs joked.

“Buffering the Vampire Slayer” features Russo and Youngs recapping and discussing every episode of “Buffy,” one at a time, in chronological order. While ”Buffy” has been off the air for more than 15 years, the hosts keep discussions spoiler-free for first-time viewers watching the series in tandem with the podcast. Russo and Youngs even upheld their spoiler-free rule when discussing plans for season five with PGN.

Russo said the fifth season contains what she calls one of the best episodes of television, referring to episode 16, “The Body.”

“It just reaches into the inside of your person and rips your heart right out of your chest,” Russo said. “It so vividly depicts the experience of grief and loss in real-time, in a way that I have never seen before.”

Russo added the hosts intend to treat the episode as reverently as season four’s episode “Hush” — a two-part discussion featuring cast interviews and musical collaborations — but “obviously in a very different way.”

Russo and Youngs will once again take special care this season when writing and producing recap songs that appear at the end of each episode. The songs are usually written from Buffy’s perspective — with Youngs singing the role of the titular character — but they also feature musical collaborations.

“I can tell you that [musician] Chris Farren will be reprising his role as Xander in the first episode because Xander and Buffy both kind of have parallel experiences with Dracula.

So, it’s a little bit of a duet — a Childish Gambino-inspired duet,” Youngs teased.

Additionally, Youngs noted plans for Dawn (played by Michelle Trachtenberg in the television series), a new character introduced at the end of the season five premiere.

“I don’t want to reveal too much, but we have somebody in mind to join us as Dawn that I think people will be delighted by,” Youngs said.

Dawn has been received as one of the show’s most controversial characters, but Russo and Youngs are mum on voicing their opinions ahead of the podcast.

“What is there to say?” Youngs said. “She’s been here this whole time.”

“Yeah. I’ve liked her since season one,” Russo added. “I think she’s grown a lot.”

Longtime “Buffy” fans will understand the humor behind this banter while first-time viewers will get the joke as the season continues.

Throughout season five, the queer hosts will continue to unpack the reasons why “Buffy” resonates with LGBTQ-plus audiences.

“There’s the literal queer characters, and then there’s the metaphors we get to pull out — ‘coming out’ as the Slayer,” Russo said. “I also feel like the narrative of continuing to stand up and fight is something that we are super immersed in as a queer community. It’s ripe for the picking.”

One theme of season five is the idea of chosen family, which resonates not only with queer people but with the “Buffering” fandom. The podcast has a secret Facebook group of more than 2,000 Patreon supporters. Russo and Youngs also host meetups and an annual “Buffy” prom, which sold out in Los Angeles in 2018 and New York City in March. While busy with details for the third-annual prom, the hosts reflect on the community they’ve created.

“It’s definitely shaped our lives irreversibly,” Russo said. “You all are finding each other. We’re finding you. You’re finding us. And we all get to talk about these really important things that resonate with us in very fun ways.”

“It’s the most emotional thing to get to witness other people connecting to the show and to each other,” Youngs added. “It’s a lot to witness and behold on a daily basis, and any time we do a live taping or prom, I need a two-day period immediately following so I can just cry whenever I need to. It is so beautiful to get to see the way that people get to love each other because they love ‘Buffy.’”

The “Buffering the Vampire Slayer” discussion of “Buffy Vs. Dracula,” live at World Cafe Live, will be available on all podcast platforms Sept. 18. For more information, visit www.bufferingthevampireslayer.com.