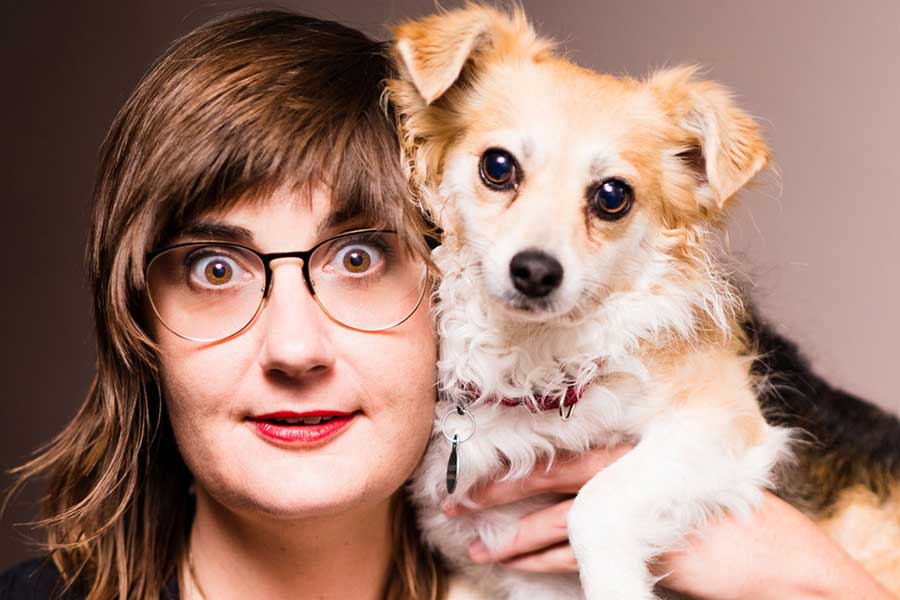 Talk about fighting the status quo.

Bisexual comedian Caitlin Gill is all about it in her debut album.

Her wry humor prominently on display in the live-comedy “Major,” she’s out to smash preconceptions, just as she does when she walks on stage.

“There will always be some kind of weird standard by which we measure what a standup comedian is,” Gill said. “Currently, it’s like the bearded flannel [guy] thing: If you are anything else, you are a comedian with a descriptor. You’re a female comedian. You’re a gay comedian. It takes an effort to shake off that adjective and just be a comedian.”

While “Major” is Gill’s first live recording, she’s already an accomplished humorist, producing her own comedy shows and writing for the small screen and print outlets, including “Bobcat Goldthwait’s Misfits and Monsters,” “Hidden America with Jonah Ray” and The New York Times.

She reserves her comedy for “more personal material” while TV allows her to stretch more creative writing muscles. Gill relayed that, even though she’s had professional brushes with superstars in entertainment meccas like Los Angeles, she still occasionally gets nervous — like when she followed Dave Chappelle on stage and he offered encouragement.

“That’s pretty much like having Martha Stewart looking over your shoulder while you make quiche for a brunch party or having Adele standing by while you sing karaoke,” she said. “When Dave Chappelle tells you you’re funny, your whole body lights on fire. That’s an incredible experience and, in the lean years, that’s the kind of stuff that keeps you going.”

Gill’s live album represents somewhat of a homecoming: She recorded it in San Francisco, where she lived for 10 years before relocating to L.A.

And listeners won’t need Chappelle lurking in the wings with a hot mic to tell them she’s talented and funny.

Gill regales the audience with glass-half-full, half-empty tales of Hollywood life — like when she saw a billboard for a TV show she writes, but she couldn’t stop because she had a Lyft passenger in her backseat.

Her upbeat material details pranks she and her partner play on one another and also includes stories about her super-supportive father, who instantly knew she was queer and has always been cool with it.

Gill’s dad is retired now, so she’s taking him and her album’s namesake pup on the road for performances.

“We’ll see how goofy this tour gets: I’m going on tour with my dad and my dog in an orange camper van.”

But Gill is used to being an anomaly. As a functional, emotionally stable and funny comedian in a solid relationship, and who doesn’t depend on profanities in her routines, she might as well be a flying unicorn.

Her plans after the promotional swing for this album include more TV writing gigs — and Gill has more stories and wry insights in the pipeline.

“There’s an album I’d love to put out right behind this one,” she said. “There are things I’ve been writing that I’m so excited to bring to light, but the timeline on that kind of project is really long, so stay tuned. There’s more standup coming.”