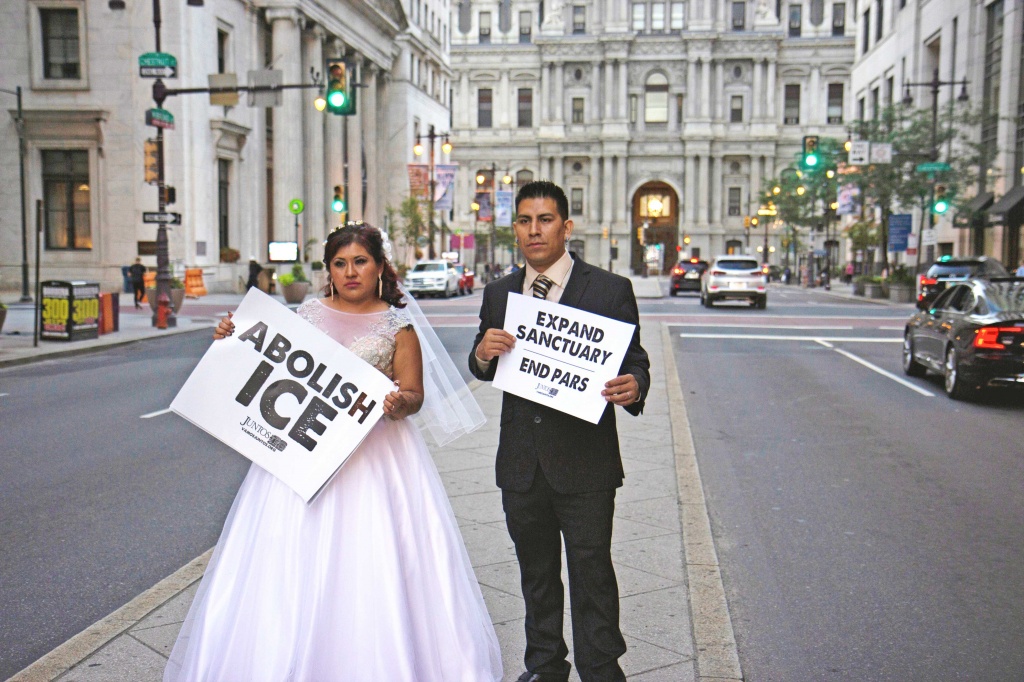 One year ago, Philadelphia officials finally decided to pull the plug on a contract that allowed U.S. Immigration and Customs Enforcement access to the Police Department’s Preliminary Arraignment Reporting System.

Local Latinx organizations like Juntos pushed for the termination of PARS, established in 2008, but that activism kicked into high gear from March 2018 until the contract officially lapsed on Aug. 31. And chronicling those exhaustive efforts was queer Latina filmmaker Kristal Sotomayor.

The daughter of Peruvian immigrants, Sotomayor said she was intent on documenting “people making the change they want to see and creating actual policy change that protects families.”

“Latinos are often portrayed as victims,” she added. “I didn’t want this to be sad or show people crying. I wanted it to be a positive, happy story. The community is so much stronger than what is put out into the world.”

To that end, Sotomayor has established a crowdfunding campaign so she could complete “Expanding Sanctuary,” the bilingual documentary short she’s directing and producing.

PARS directly impacted the city’s Latino community, as the contract gave immigration officials ingress to such data as the country of origin and Social Security information of anyone who was arrested or had encounters with police — vital details that activists and, ultimately, city officials accused ICE of misusing to round up undocumented residents who otherwise weren’t accused or convicted of crimes.

Sotomayor heard about Juntos, the South Philly-based immigrant-advocacy group, while she was a student at Bryn Mawr College, from which she graduated in 2017. With a desire to support the Philadelphia Latinx community, she focused her lens on the organization’s efforts to end PARS. Among her interviews on camera is Miguel Andrade, communications manager for Juntos and a queer Latinx immigrant.

“More than anything,” Sotomayor said, “I was drawn by the stories, and the [Latinx] community coming together. That’s not often seen.

“With this particular issue, it’s difficult to understand how you are being surveilled by the government,” Sotomayor added, “but people don’t realize the systems of policing in place to incarcerate people and communities of color.”

“Expanding Sanctuary” covers the anti-PARS campaign from its first meeting at Juntos and includes footage of marches and rallies around City Hall, the filmmaker described. Juntos activist Linda Hernández is also featured prominently in the documentary.

“Linda is the protagonist, and I want the viewers to see everything through her eyes,” Sotomayor explained. “She was quiet at the first community meeting and not super-active. Later on, she takes a larger role at the meetings, and then leads a protest and becomes one of the faces of this campaign. I wanted to show her personal growth. She’s relatable and lovable.”

Juntos’ headquarters at Sixth Street and Washington Avenue also stars in the short film, said Sotomayor. She also captured the July 4, 2018, protest at the Philadelphia ICE office at Eighth and Cherry streets, during which several demonstrators were arrested. In stark contrast, she also captured film of tourists celebrating independence.

Even with the cessation of PARS, Philadelphia experienced an increase in ICE raids in the past year. In contrast with New York City and other sanctuary cities with large immigrant populations, Philly saw more deportations.

The ramped-up targeting of immigrants motivated Sotomayor to produce the documentary.

“As a queer woman of color, our stories are not told by us, or people who live our experience. It’s told by privilege,” she said. “I have privilege with the camera of telling this story and being responsible to this community and to decolonize the sometimes-abusive ways documentary filmmakers take a story from the community. I didn’t want to do what straight white male filmmakers do when they make communities-of-color documentaries.”

Sotomayor’s crowdfunding campaign has a goal of $10,000, which would cover the film’s editing, color correction, sound mixing and music composition.

The director also wants to offer opportunities to other Latina filmmakers.

“I am a young woman of color trying to work in film. People don’t give us a lot of money. It’s hard starting out,” she explained. “I took on so many roles — director, producer and cinematographer — because I could only afford my own time and a camera. I got a Leeway Art and Change grant, and that helped me get my editor, Annie Diaz, a queer Latina who lives in Lancaster. My producer, Marángeli Mejía Rabell, works with me at the Philadelphia Latino Film Festival and also has a relationship with Juntos. I also have two interns, Maya Winneg and Samantha Tan, whom I met at a Temple University panel.”

“I wanted to do an all-female crew to lift others up and give as many people as possible a chance,” added Sotomayor. “I feel women, women of color and queer folks aren’t given the same opportunities, so I want to take as many people as I can with me.”

To donate to “Expanding Sanctuary,” visit the website, https://www.seedandspark.com/fund/expanding-sanctuary#story