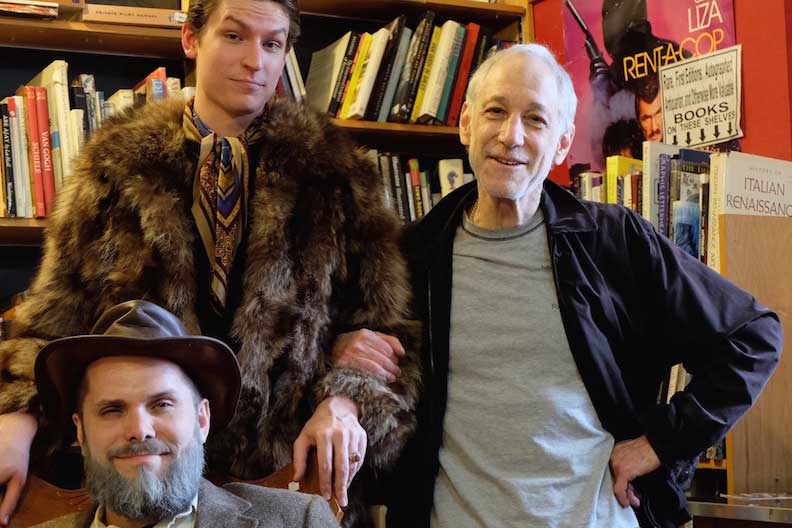 When the artistic director of the “Whitman at 200” program approached Tom Wilson Weinberg about contributing a show to the program commemorating the iconic poet’s 200th birthday, the local out songwriter was ready.

It just so happened that Wilson Weinberg had already outlined such a concept  — a musical called “Oscar Visits Walt,” based on a real account of Oscar Wilde, on his first lecture tour of the USA, meeting with the famous American poet.

“I had always been fascinated by the fact that Wilde came to America at age 27, before he had written any of his famous work. He wanted to meet Walt Whitman. I thought that would make an interesting little two-character musical,” recounted Wilson Weinberg. “I did some research, but then set it aside to work on something else. When I was approached by my friend with Whitman at 200, I dug it out.”

“[Whitman and Wilde] met privately, you know,” he added. “There’s been a lot written about their meeting, but no one was there. So, I felt I could do with it what I would — so long as I kept both men in character. I must say, I’ve never had a collaboration with such good lyricists before, as I’m using Oscar’s and Walt’s own words and adapting them to lyrics. I even had the audacity to rewrite some of their words to fit into my songs.”

Wilson Weinberg is perhaps best known for his first musical act, “The Ten Percent Revue,” which made its debut in Boston in 1985, directed by the then-unknown Lea DeLaria. It premiered in Philadelphia in 1987 at Walnut Street Theatre Studio 5 and had a subsequent revival at Society Hill Playhouse.

Many additional productions took place around the country, to largely positive reviews from such mainstream press outlets as The New York Times and The Washington Post.

“There’s no question that ‘Ten Percent’ is the most commercially successful project I’ve done,” said Wilson Weinberg, adding he was surprised by the show’s success. “I didn’t know what to expect that first time out. I didn’t know who was going to show up, and then all those reviews hit — and there it was.”

His follow-up revue, “Get Used To It!” was given a splashy Off-Broadway premiere by John Glines, the original producer of Harvey Fierstein’s “Torch Song Trilogy.” While it also received positive press and did rather well at the box office, it didn’t come close to the songwriter’s debut production.

“Yes, it was a bit disappointing,” Wilson Weinberg admitted. “I thought my work had improved with ‘Get Used To It!’ in terms of sophistication and maturity. But you never know ahead of time what will be popular.”

His first major foray into a historical two-handed story was “Eleanor & Hick,” an examination of the years-long relationship between Eleanor Roosevelt and journalist Lorena Hickock. The show established the subsequent career trajectory in which Wilson Weinberg found his niche: intimate two-character portraits often based on historical subjects or other people’s stories.

“Two-character stories seem to be what I’ve decided I want to do. I don’t mind being a small operator. I know it’s crazy, if you think about it, that I would spend over eight months preparing a show that might be seen by only a little over 100 people. But that seems to be what I’m happiest doing. It’s less a matter of how many people see a show than how many people appreciate it — how many people get it.”

At this point, Wilson Weinberg said, he has some perspective about his career, regarding both his development as an artist and his work’s role in the greater LGBTQ-plus community. And “Oscar Visits Walt,” which is being performed at Giovanni’s Room, is enabling him to come full circle as a participant in Philadelphia’s gay cultural scene.

In 1973, before Wilson Weinberg became known as a songwriter, he was a cofounder of the original Giovanni’s Room on South Street, along with Ed Hermance and others.

His recent artistic work has centered on his ongoing “Cabaret Verité” series at William Way LGBT Community Center, an event that also serves as a semiannual fundraiser for the center.

“I think I’ve gotten better as a songwriter, more sophisticated and mature,” said Wilson Weinberg. “I mean, some of that early stuff was pretty simplistic. But in terms of the arc of my work, I’ve always been most influenced by queer politics. Each show that I’ve done reflects what’s been happening in our community at that moment. So, I’d like to think that the growth of my work reflects the growth of our community.”

In many ways, “Oscar Visits Walt,” which is being performed at Giovanni’s Room, is enabling Weinberg to come full circle as a participant in Philadelphia’s gay cultural scene.

In 1973, before he became known as a songwriter, Weinberg was one of the original volunteer founders of Giovanni’s Room on South Street, with Ed Hermance and others. Weinberg was happy that Philly AIDS Thrift took over Giovanni’s Room upon Hermance’s retirement and that it has continued to thrive under their management. In fact, “Oscar Visits Walt” will be serving as a fundraiser for Philly AIDS Thrift.

Most of Weinberg’s recent work has centered on his ongoing “Cabaret Verité” series at the William Way LGBT Community Center, which serves as a semi-annual fundraiser for the Center.