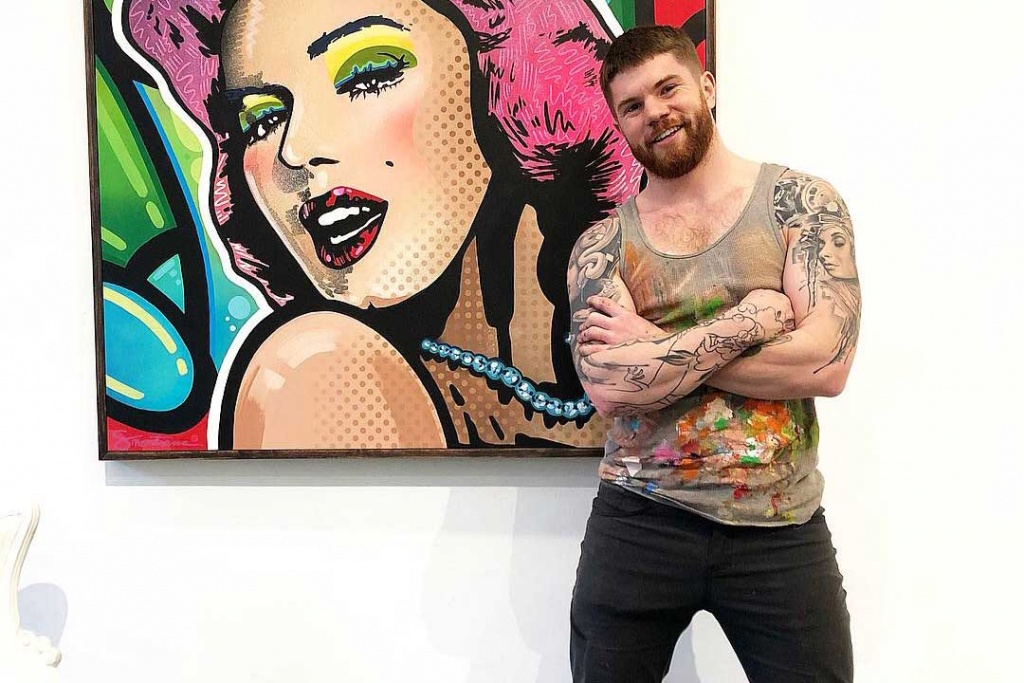 Gunnar Montana describes himself as “artistic and restless.” Best known as a dancer, choreographer and performance artist, he is looking to conquer a new world of expression.

“I’ve been involved with doing visual work forever,” the artist said. “I ended up with a firm grasp on the visual arts, so I shifted into dance. That was a vocabulary I wanted to learn.

“But in the last couple of years, I went back to art as a way for me to decompress after the physical demands of a month-long show,” Montana added. “It was a way for me to continue to be creative, but away from other people, just by myself. Then at one point, I stopped and looked at the art and I thought, Wow, this is pretty good.”

A humble Montana said that, as a new artist, he’s still trying to figure out how his creations will come together in a collection.

“For me, it’s been interesting to see where this show was going to go. I didn’t have any restrictions.”

He ended up painting mostly women and gay icons that “signify power and elegance.”

“I started off doing Marilyn Monroes,” he explained, “because she was so much fun to do. Then it branched into Frieda Kahlo and then Grace Jones, and all these other strong, powerful women. I have a strong connection to my feminine side, so it was a nice way to get that out.”

Montana’s paintings seem to find inspiration from Roy Lichtenstein and his comic-inspired work, but with an added flair: a gay sensibility and humor missing from Lichtenstein’s work.

Meanwhile, Montana’s work has been well-received online, and he is often commissioned by his fan base — but that also creates a challenge for the artist.

“People come to me wanting me to paint certain celebrities, and I think, I can do that. But sometimes there’s this back-and-forth with what a customer wants, which could be different from what I want to do. It is a balancing act, and it’s not always easy,” Montana relayed.

“So, with this show, I thought, Let’s do exactly what I want to do and let’s see if that sells. It’s a gamble. It could flop — but it’s been fun.”

Entertainment aside, Montana said he still has to consider the economic aspects of being an artist.

“One thing I know is that keeping a handle on the business side of art is just as important as making the art,” he said, adding he hopes his creations can generate enough to support his dance.

Montana said he works hard to balance artistry and commercial success, and that he’s keenly aware when his heart isn’t into something or when he’s only doing it for money. He described his typical audience as a “gay demographic who tend to gravitate toward the Marilyn Monroes, the Audrey Hepburns, the Meryl Streeps.”

What’s next for Montana?

“I don’t know. I try to integrate each field of endeavor so they sort of support each other. For instance, I’ve recently gotten very interested in directing film, so people who are interested in my art will see a sample of that as part of my gallery show opening.

“The bottom line is, I get bored very easily, so jumping from one field to another just naturally happens,” the artist said. “If it’s something I feel I can excel at, then I’ll present it publicly. I feel that I have the most to say with my dance productions, but as far as my visual art is concerned, I don’t think I’ve found my voice yet — but I like what I see.”