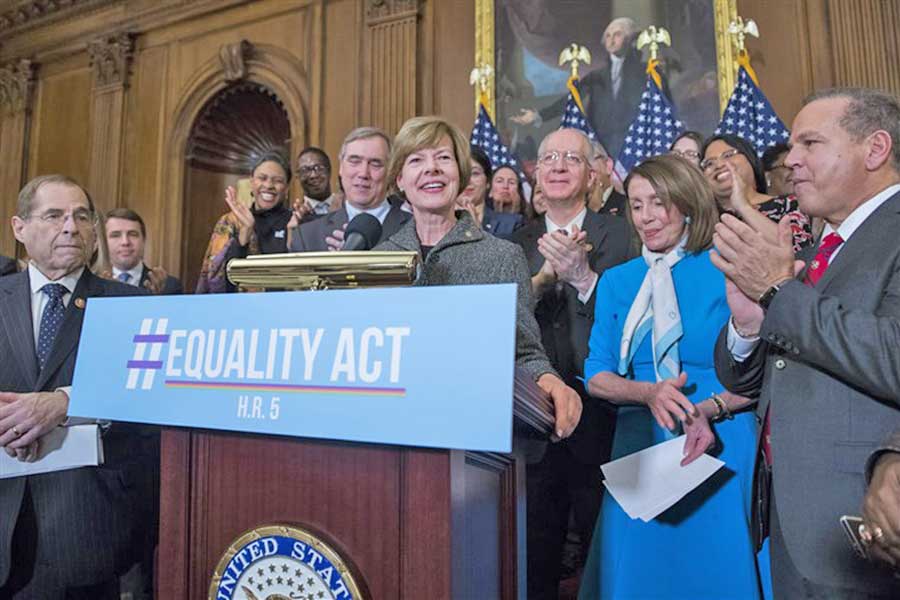 “I now commend the bill to the House and the House to history.”

So ended the four-hour debate on the House floor on the most important civil rights legislation since the 1964 Civil Rights Act and the 1990 Americans with Disabilities Act. Rep. Jerry Nadler, who had chaired the debate called the vote for HR5, also known as the Equality Act.

The bill will protect LGBTQ Americans from discrimination on the basis of sexual orientation and gender identity in employment, housing, public accommodations, public education, federal funding, credit and the jury system.

In its current form, the bill was first introduced in 2015. It is sponsored by Representatives David Cicilline (D-RI) and Brian Fitzpatrick (R-PA) in the House and Senators Jeff Merkley (D-OR), Susan Collins (R-ME), Tammy Baldwin (D-WI) and Cory Booker (D-NJ) in the Senate. Speaker Nancy Pelosi (D-CA) prioritized passage of the legislation, which now heads to the U.S. Senate.

In a sweeping assent from the Democratic Party, the bill passed 236-173. Eight Republicans, including the bill’s co-sponsor, Brian Fitzpatrick (R-PA), joined 228 Democrats in passing the legislation. House Democratic Leader Steny Hoyer (D-MD) called one of the most historic bills in American history.

The bill faces likely defeat in the Senate where Democrats do not have the votes for passage. On May 13, a senior aide to President Trump said he was against the bill, signaling veto even if the Senate were to pass it.

Nevertheless, the overwhelming support in the House was a historic event because it marked the first time the legislation had gotten a full vote in Congress.

In an emotional speech, Hoyer said, “It’s a shame that the House is not full and the gallery not packed with people because this is an historic day.”

Hoyer said the Civil Rights Act and the ADA were voted in through bipartisan actions. He said, “Every Democrat will vote for this bill. The Equality Act is about America. It’s about who we are and what we believe.”

Rep. John Lewis, one of the great Civil Rights icons in American history spoke with eloquence and passion. “Today is May 17. On May 17, 1954 the Supreme Court ruled on Brown versus Topeka Board of Education. I remember that day,” Lewis said, his voice rising. “I was 17 years old. I thought I would be attending desegregated schools. It never happened for me. Today we have the opportunity to cast this vote and set all of our people free.”

The floor erupted into spontaneous applause.

Rep. Sheila Jackson Lee (D-TX18), another leader of the Congressional Black Caucus, read from a pocket copy of the Constitution. Lee said the bill had been “germinating for five years plus.”

Lee held up a pocket version of the Constitution and asserted, “the Constitution will be alongside of the Equality Act. The Civil Rights Act will stand alongside for fair housing and accommodations and no matter who you are in this country you will have this act.”

Lee urged people in the religious community to vote for the Equality Act.

Newly elected Rep. Madeleine Dean (D-PA04) said simply, “This is a historic day, I am proud to be a part of it” as she urged everyone to vote for the bill.

Rep. Hakeem Jeffries (D-NY), chair of the Democratic Caucus, quoted from the Declaration of Independence, noting, “these words are incomplete in their application.” Jeffries cited “the legendary Barbara Jordan,” a black lesbian member of the House, and her observation that those words “did not apply to African-Americans, to people of color, to Native Americans, to women, to the LGBTQ community.”

Most of the Republicans who spoke, claimed the bill would harm both religious freedom and women’s rights. Rep. Ross Stano (R-FL15) said he was a “proud Christian” and spoke about the “fundamental importance” of the First Amendment, quoting Coretta Scott King to undermine the bill.

Rep James Comer (R-KY-01) and Rep Bradley Byrne (R-AL01) focused on women’s sports. Both said they were “deeply troubled” that there would be “unintended consequences–serious, harmful consequences” by eradicating all protections based on gender and subverting them to gender identity. Comer said the Equality Act “delivers a serious blow to one and totally redefines the other.”

Rep. Vicky Hartzler (R-MO04) insisted, “a vote for this bill is a vote against women.” Describing herself as a former teacher and coach, she made a detailed case that teams and even the Olympics would be “recruiting men who identify as women” to “win medals.” She deconstructed how all of women’s sports would become “men competing as women” and repeatedly referred to trans women athletes as men pretending to be women in order to win easily against female competitors instead of men. “Men are taking home the Gold in women’s sports,” she said.

Hartzler added, “Women’s scholarships would be ended by HR5” and declared the Equality Act “Devastating legislation.”

Rep. Louie Gohmert (R-TX01) quoted Antonin Scalia and said, “Gender dysphoria is the opposite of euphoria.” Gohmert invoked images of rape victims “triggered” by being forced to share public bathrooms “with men” and battered women forced to share shelters with men.

But Rep. Sylvia Garcia (D-TX29) said the Equality Act would mean having “explicit protections for LGBTQ people for the first time–first time. Finally in Texas when we say ‘y’all’ we will mean you all.”

Speaker Nancy Pelosi (D-CA), whose district includes San Francisco, was smiling and beaming as she laid out a history of anti-gay legislation that had been overturned. She referenced longtime lesbian activists and San Franciscans Del Martin and Phyllis Lyons as “an inspiration to many of us” who had taught her and many others about the need for comprehensive civil rights for LGBTQ people.

Pelosi said, “Tolerance–that’s a condescending word to me. Respect. That’s what we need.”

Rep. Jamie Raskin (D-MD08) invokes Abraham Lincoln and the original Civil Rights Act which he said passed in 1964, 334-85. “We brought down the walls of segregation. Today is a triumphant and glorious moment for the House and the United States of America. Let us finally bring down the walls of discrimination against all Americans. Let us vote for this bill.”

LGBTQ activist groups argue that federal law should shield LGBTQ people from discrimination, because bans on sex discrimination should extend to discrimination based on sexual orientation and gender identity. This has been the basis for all discrimination lawsuits in recent years.

HRC President Chad Griffin said, “Today’s historic vote is a major milestone for equality and sends a powerful and profound message to LGBTQ people, especially LGBTQ youth, that the U.S. House has their backs. No one’s rights should depend on which side of a state or city line they live on, and today we took a giant step forward in our journey toward full equality. This historic victory would not have been possible without the millions of LGBTQ people and our allies who organized, mobilized and turned out to elect a pro-equality majority in 2018.

“Now, we will take our fight to the U.S. Senate and turn up the pressure on Leader McConnell to allow a vote on this crucial legislation. And we won’t slow down in working to turn out the 10 million eligible LGBTQ voters and our millions more allies to elect a pro-equality president in 2020 who will sign the Equality Act into law.”

A majority of people in every state support laws protecting LGBTQ people from discrimination in jobs, housing, education and public accommodations. This applies even in red states in the Deep South.

The bill now moves to the Senate.