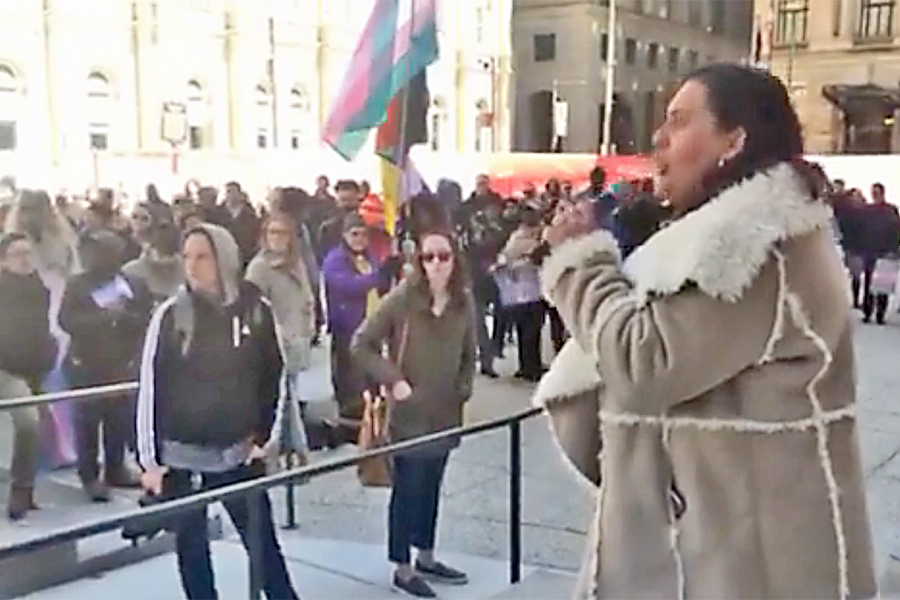 It was supposed to be a celebration of the annual Trans Day of Visibility. Philadelphians were to gather at City Hall at midday Tuesday to raise the Trans Pride Flag and hear speakers from the trans community.

But the ceremony took a different turn when an audience member verbally attacked one of two out transgender candidates running in the May 21 primary election, Deja Lynn Alvarez.

Alvarez — a commissioner on the Mayor’s Commission of LGBT Affairs and a member on the Philadelphia Police Liaison Committee — was behind the podium at the time, addressing attendees and explaining how others have claimed that she changed her last name and is not Latinx.

She referred to those making the allegations as people who “prop themselves up under the guise of activism.”

“My very identity, my ethnicity, my name and my own father have been used in a Trumpian-style violent attack against me and my campaign,” Alvarez said, mentioning she had court documents from when she changed her name, with her dead name [a trans person’s assigned name at birth, used before they transition] on them, plus court records in her name when she sued the city of Philadelphia in 2001.

Alvarez accused Muhammad of “telling a transwoman she’s not who she is.”

Cohen said of the incident, “My former campaign manager, Abdul-Aliy Muhammad and Deja Lynn Alvarez have known each other for many years. Every time that Abdul-Aliy has spoken about Deja, it has been solely in Abdul-Aliy’s individual capacity and absolutely not on behalf of myself or my campaign for City Council at-Large.”

Cohen said Muhammad left her campaign last week and added, “I am sorry for the hurt or confusion that has resulted from statements by Abdul-Aliy Muhammad regarding Deja Lynn Alvarez. And I also regret the pain caused to Deja and to everyone in attendance.

“I am thrilled that there is long overdue representation of the trans community in the race for City Council and I wish Deja every success in her campaign,” Cohen concluded.

It was unclear at press time who would replace Muhammad as Cohen’s campaign manager. Cohen said Wednesday that she and staff members were discussing possible candidates for the position.

Alvarez later posted on Facebook of the accusations about her heritage, “I am a Mexican-American woman. My father is Mexican. My grandfather’s name is Carlos Alvarez. I was born in Chicago, Illinois, to my parents, Peter George Alvarez and Marie Theresa Reeder. I was raised in Delaware. I moved to Philadelphia in the early 1990s, and legally changed my first name to Deja to reflect my gender identity as a transgender woman.”

As for the encounter outside City Hall she said, “I can’t believe as a transwoman I had to even address an attack on my identity, last name, heritage, and who my father is. The fact someone would claim my own father is not my father is violent and grotesque.”

Muhammad, who goes by the pronouns “they/them/their,” said in a message to PGN, “I don’t trust the PGN to report on this incident accurately, given the public statements on social media and within the PGN itself, from Publisher Mark Segal,” they said. “He is a known hater of the BBWC and has slanted the publication to a biased position on LGBTQ issues involving race and ethnicity.”

However, Muhammad posted at various times on Facebook, “I stand by everything I’ve said about Deja. … Using transphobia as a catch-all when your [sic] challenged about racial or ethnic identity is hella violent. Most of the people who are calling you out sis are AfroLatinx transwomen and Black transwomen. To conflate transphobic attacks with that is such a lazy way to avoid being accountable.”

They added, “I don’t believe her when she says she is Mexican-American, this is not the first iteration of her ethnic identity. I believe the Black and AfroLatinx transwomen who have known you as white Deja.”

Alvarez wrote after the incident, “I’m so appreciative of all the love and support. However, my heart is heavy. There is so much hate and bigotry that we face as members of the LBTQ community. When we fight with each other we are letting them win. We are doing the work for them.”

The Trans Pride Flag will remain at City Hall until April 5.