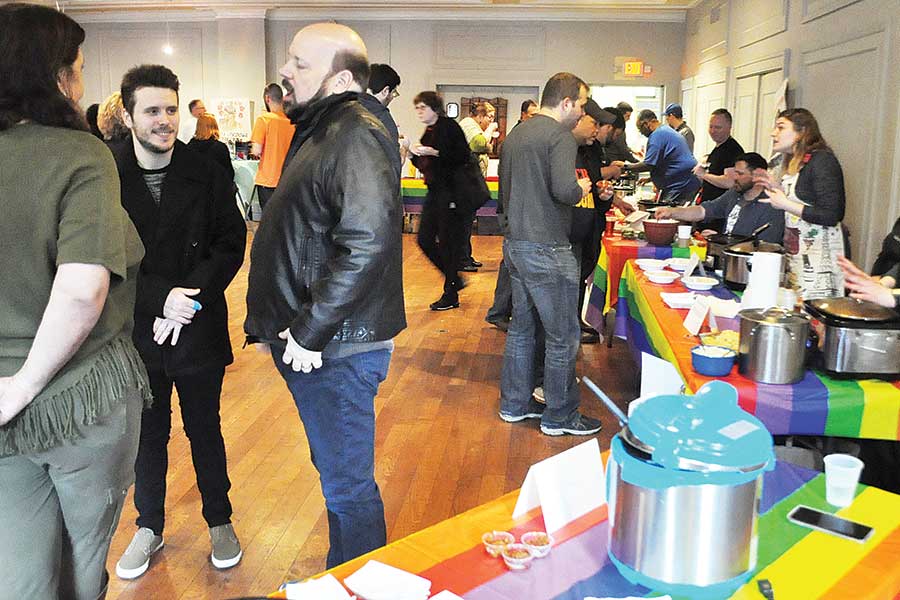 Most people may not know this (or care), but I am not native to Philadelphia. In fact, I grew up on a farm 80 miles northwest of Amarillo, Texas. Yes, my adolescence was spent driving a tractor, dealing with cows, pigs and chickens — and doing my best to avoid getting beaten up by homophobic cowboys. Ah, childhood.

It also means that I was essentially suckled on chili and weaned on barbecue.

Don’t get me wrong. I love my adopted hometown of Philly beyond all measure, but I have to be honest: I miss chili and barbecue. It’s akin to Philadelphia expatriates searching for a decent cheesesteak in L.A. — it’s simply not to be had. I’ve been to several barbecue joints in Philly; some of them are decent, but it’s just not the same. And chili? What passes for chili in Philly would bring tears of hilarity to the eyes of those cowboys I used to know.

So, when I heard that the William Way Community Center was kicking off an annual Chili Cook-Off fundraiser, I convinced my editor that I was uniquely qualified to go see what’s what.

What it was, was 20 aspiring contestants lined up in the Mark Segal ballroom with slow-cookers filled with their personal concoctions, and a large, enthusiastic crowd of chili aficionados sampling the offerings and voting on their favorites. The contestants were vying for first prize in two categories: traditional recipes and vegetarian.

I admit, the second category made me nervous. Where I come from, vegetarian chili is one of the seven deadly culinary sins, right up there with ground-turkey burgers and soy milk. But I owed everyone a fair shake, so I dove in with gusto.

First thing I noticed was that everyone had given their recipes cute descriptive names, presumably to increase identifiability among the voters. Or it could just have been in the spirit of the day’s fun.

One thing I rapidly picked up was confirmation of something I learned long ago: amateur urban chili chefs tend to unnecessarily gussy up their recipes. Chili is best when kept simple and basic. Add too many extra ingredients and you end up with something more like a soup or a stew.

Another thing common among the contestants seemed to be an aversion to seasoning and spice. For a former Texan, I have an unusually low tolerance for spicy heat, but even my fragile palate found many of the recipes in dire need of some additional kick.

Turns out, though, some of the traditional recipes were pretty darn good. A friend had warned me that Leah’s Chili was the hottest and spiciest he had encountered. Indeed, it had some kick, but nowhere near uncomfortable levels. An offering called White Turkey Cajun, while not entirely traditional (turkey? in chili?) had a good spice level, with added sausage and other Cajun ingredients lending body and complexity.

But my favorite was Chili Chili Bang Bang. The cook used multiple meats and a nice level of seasoning. There was a good level of heat and an added taste of sweet not present in any other recipe. Anyone who’s watched “Chopped” on the Food Network knows that a good balance of spicy and sweet can yield really tasty results.

As for the vegetarian recipes — well, I gave it a fair shot. Granted, many of the recipes were very tasty, but one and all, they were too bland to qualify as good chili. In addition to being under-seasoned, many had textural problems from a lack of an adequate meat substitute, leaving many too soup-like for my preference. Fortunately for the vegetarian chefs, my tastes did not carry the day. The vegan recipes in particular were a hit with many in the crowd.