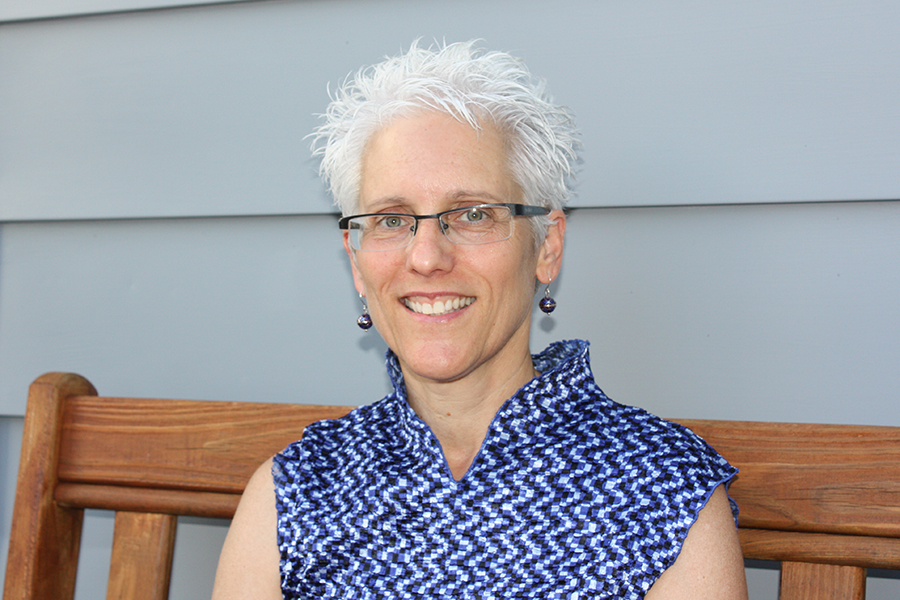 Lori Schreiber was the first openly gay elected official in Montgomery County. Currently running for Clerk of Courts, if she wins this year, she will be the first gay “Row Officer” in Pennsylvania.

PGN: Your sister has a beautiful post online about your annual Mother’s Day outings. Tell me a little about the family.

LS:  My mom is 96, though she’d say “96 and a half.” My father died 20 years ago. I have three siblings — an older sister and brother, then there is a 14-year gap between me and my younger sister. She’s the one whose blog you read.

PGN: What did the folks do?

LS: My father had an antique company on Pine Street in Philadelphia. In the ’60s, Dallas was the place to be for antiques so we moved there for a while. I spent my formative years there before moving back here. When we came back, my father went back to school and earned a bachelor’s, a master’s and a doctorate degree, then became a college professor.

LS: My mother worked as his business manager. She had a business certificate, I think. Back in those days, women didn’t get educated in the same way. She also owned various small businesses over the years, gift shops, etc. But she would probably describe herself as a painter. Both of my parents loved art. I actually still have some things from their shop. They still have the price tags on the bottoms, otherwise I wouldn’t know what half of them were. Fun fact: My mother was on “Antiques Roadshow” once. They came to the house and interviewed her about a chair, but it turned out to be a replica.

PGN: Awww. So, what were you like as a youngster? Academic? Sporty?

LS: Not sporty. I have no eye-hand coordination. But I was in ballet for many, many years.

LS: It’s more flexibility and there’s no ball coming at you!

PGN: True. What did you study in college?

LS: I majored in social welfare and then switched over to sociology. [Laughing] Two liberal-arts majors that don’t lead to any kind of jobs. Then I got my master’s degree in social relations. I come from a family that’s always been politically involved, but also really invested in helping people.

PGN: How did you wind up in Abington?

PGN: Tell me about some of your civic engagement there.

LS: Oh gosh. I’ve been a commissioner since 2006. I’ve done a ton of things that concern government issues — fighting for more transparency by televising our meetings, helping to develop a revitalization plan, a lot of administrative work that’s important — but probably not exciting to read about. I guess what I’m best known for is an animal-rescue fair that I started. Animals are really important to me. I have two rescue cats, Tasker and Reed, named after streets in Philadelphia. I also started the Roslyn Film Festival, because the arts are important as well. Both events are benefits and help build a sense of community. I also battled for a nondiscrimination ordinance in Abington in 2012. (It passed.) Last year, I did some investigating and realized that kids who counted on getting breakfast and lunch at school were going hungry during the summer, so I helped get a summer lunch program launched in our area.

PGN: What made you decide to run for office back in 2005?

LS: My family was always involved in various causes. We’ve supported political candidates. I’ve worked at a women’s center. I’ve been a teacher. I’ve worked with people with mental-health and substance-abuse issues. I helped create the POWER Program (a career-counseling program for people with mental illness) at Montgomery County Community College. I volunteered to work for (now Attorney General) Josh Shapiro, the first time he ran for office. I went with him knocking on doors and gained a lot of experience. At the time, the Democratic Party was looking for someone to run for Township Commissioner. At first, I said no when they approached me. And then I thought, Why not me? The position had been held by a Republican for years. I think they thought I’d be just a space-filler, but I’m a hard worker and that’s not in my DNA. So, I went out and started knocking on doors and meeting people. I went around so many times that people were like, “OK! We’ve met you three times already. We’re voting for you, so there’s no need to come back!” I ended up beating the incumbent, who’d been in office for 24 years.

LS: Yes. I’m running for the position of Clerk of Courts. In Montgomery County there is a County Commissioner and then what are called “Row Officers,” who head different departments like Clerk of Courts, Treasurer, District Attorney, etc. Clerk of Courts handles people coming through the criminal-justice system. When I worked with the POWER Program, we dealt with a lot of people who, because of their mental-health or substance-abuse problems, found themselves in the criminal-justice system. I believe that everybody needs to be treated with dignity and respect. And I think that though the people who work in those offices are lovely people, they often didn’t get the proper training to deal with some of the things they may face that aren’t on the administrative side. I think I can help there. I’ve also worked with the District Attorney on our opioid task force. I’ve worked with victims of crime and probation officers and police officers, all people who work with the Clerk of Courts. So, it seems like a good fit. Plus, I just received the Democratic Party nomination, so I am officially the endorsed candidate.

PGN: As an out politician, have you received any pushback?

LS: Not as much as I thought I might. When I first ran in 2005, I didn’t make a big deal out of it. I kind of kept it low-key. I did do an interview and spoke about me and my partner buying a house. I didn’t want anyone to try to act like they were outing me. I wanted to put it out there first, but it wasn’t part of my campaign. Though apparently my opponent would tell people I didn’t have “family values.”

PGN: How did you meet your wife, Linda?

LS: We met in 1991. We were sitting next to each other at a dinner event with friends. We decided to share an appetizer, started talking and hit it off. She asked for my number and then I didn’t hear from her for days. Turned out she lost the slip of paper and spent a week trying to track me down. We dated that summer, but then I broke it off. I’d just come out of a relationship and wasn’t looking for anything serious. She said, “OK, but you know what? You’re going to marry me someday.” In true lesbian fashion, we remained friends. In 1996, we reconnected and have been together ever since. When gay marriage became legal, we got married.

PGN: Ever been harassed for being open?

LS: Not really. The most was when I was in a bar with Linda and my niece and her nephew. There was a band playing, so Linda and I started dancing. Some men started making comments and things escalated to the point that there was almost a bar brawl. Now, 20 years later, the place has changed hands and we had our first event for the Montgomery County Gay Caucus there. Things have changed, though we still don’t have statewide protection and with the current administration we’re in danger of rolling back. And when we were fighting for the antidiscrimination ordinance, we had protesters at the meetings. I had to have a police escort from my car. And during one of the big events, one of the officers stood behind me the whole time to ensure my safety. Fortunately, nothing happened and we got [the ordinance] passed.

PGN: Let’s do some random questions. Your biggest fashion faux pas or statement?

LS: [Laughing] Well, I’m known for my hair! And I think about fashion all the time because, as a female candidate, we’re scrutinized all the time about our appearance. The men can wear the same gray suit over and over, but I wear the same red blazer twice and people comment. You saw that with Hillary on the campaign trail. There’s another woman on my ballot and we have to talk about what we’re wearing if we go to the same event. It’s a challenge. I didn’t have a big wardrobe before, but I’m forced to buy new clothes just to run for office.

LS: There was this older ballet student in the class after me. I didn’t know her, but I remember watching her put her hair up in a bun thinking she was pretty.

PGN: What era would you go back to?

LS: I’m a little obsessed with English history, Queen Elizabeth I and the Tudor time period. I’d love to hang out with her. Though I’m not thrilled with the idea of wearing long skirts. Mine would be dirty all the time. And I don’t know if I could handle being around people who only bathe twice a year.

PGN: This last election saw more women getting involved and elected than ever before. Is it exciting to be a part of that?

LS: Yes. It’s nice that there are so many role models in office for girls to look up to. We didn’t really have that. Years ago, I met Nancy Pelosi and got a picture with her. At that time, not many people knew who she was. So, now it’s exciting to have that photo! It’s great to see so many women gaining prominence — Stacey Abrams, Kamala Harris, Alexandria Ocasio-Cortez … so many amazing women changing politics.

PGN: And after the elections in May, we’ll add your name … again! 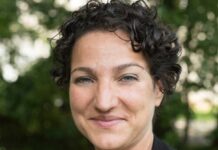 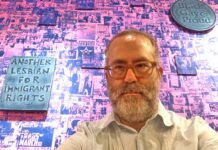 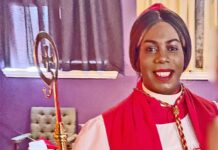