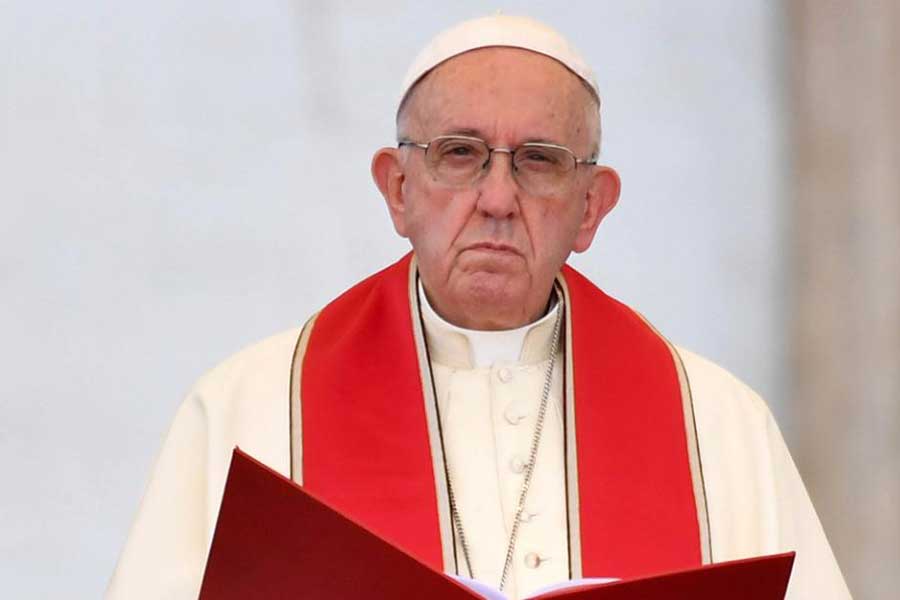 Pope Francis, once seen as opening the door to gay priests with a 2013 statement to the press, seems to have changed his mind.

When asked about gay priests then, Francis said in a groundbreaking statement, “If someone is gay and he searches for the Lord and has good will, who am I to judge?”

A new book, “La Forza della Vocazione” (“The Strength of Vocation”), written by Spanish missionary priest Fernando Prado and based on interviews with Francis, has the pope taking a different tack and tone. In the book, Pope Francis declares that homosexuality in priests is a cause for grave concern within the Church. “The issue of homosexuality is a very serious issue that must be adequately discerned from the beginning with the candidates,” Francis told Prado when discussing potential applicants for the priesthood.

“The Strength of Vocation” debuted on Dec. 3, in multiple languages, but it was early excerpts in Italy’s Corriere Della Sera newspaper that made headlines around the world and shocked a number of LGBTQ Catholics on the first Sunday in Advent.

In the excerpts, the pope referred to homosexuality in seminaries, convents and monasteries as “a very serious question. In our societies, it even seems homosexuality is fashionable. And this mentality, in some way, also influences the life of the Church,” Francis tells Prado. “This is something I am concerned about, because perhaps at one time it did not receive much attention,” Francis said.

For more than 20 years, the Catholic priesthood has been viewed as an increasingly gay profession, making the pope’s comments all the more insulting, and, as Rocks suggested, evidence of Francis’s own “heterosexual machismo.”

In November 2000, Father Paul Shaughnessy wrote a paper titled, “The Gay Priest Problem.” The article begins by citing a report that day in the Kansas City Star newspaper that hundreds of Catholic priests had died or were dying of AIDS, and that secret was hiding another: a gay priesthood.

The essay details how the priesthood was now perceived — with AIDS cases among priests as the metric — to be at least half a “gay profession.”

That is not a picture of the priesthood Pope Francis wants promoted. We “have to urge homosexual priests, and men and women of religion, to live celibacy with integrity, and above all, that they be impeccably responsible, trying to never scandalize either their communities or the faithful holy people of God,” Francis said. “It’s better for them to leave the ministry or the consecrated life rather than to live a double life.”

Yet as Rocks noted, the pope makes no mention of heterosexual sexual behavior and its impact on the same vows of celibacy. As for the double life Francis alludes to for gay priests, a documentary on priests living clandestinely in heterosexual relationships was shown on Italian TV last month and Pope Francis intends to consider allowing some priests to marry. Francis has long said he appreciates the discipline of celibacy, but that it can change given it is discipline, not doctrine.
Except for gay priests.

In 2016, the Vatican reaffirmed banning gay men from Holy Orders. Francis is quoted in the book as saying, “It can happen that at the time perhaps they didn’t exhibit [that tendency], but later on it comes out. In consecrated and priestly life, there’s no room for that kind of affection. Therefore, the Church recommends that people with that kind of ingrained tendency should not be accepted into the ministry or consecrated life. The ministry or the consecrated life is not his place.”

Rocks called the double standard troubling and inconsistent with the call to the priesthood.

“Isn’t it a gift that a chaste holy gay person brings to the setting?” Rocks queried. “I myself lived as a gay man in the clergy,” Rocks said.

What worries Rocks about the pope’s rhetoric on gay priests is that it will force people to keep their gayness hidden and, Rocks said, that will be harmful and cause “psychological problems.”

In August, noted Jesuit theologian Father James Martin authored a piece in “America Magazine” about “The Witch Hunt for Gay Priests,” writing, “The intensity of hate and level of anger directed at gay priests are unprecedented in my memory.”

PGN reached out to the Philadelphia Archdiocese for comment, but at press time, calls to Communications Director Kenneth Gavin had not been returned.