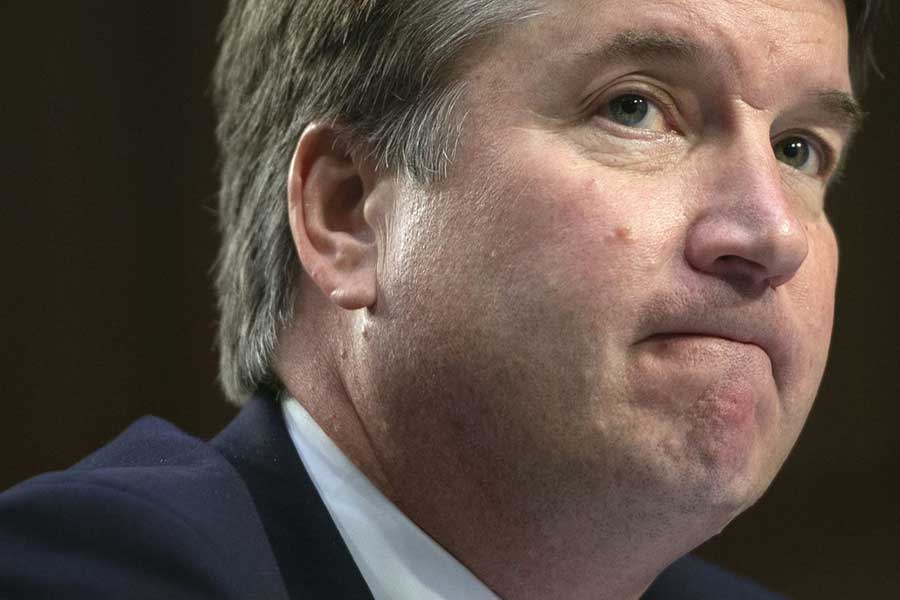 Call it Anita Hill 2.0. Or, if you’re the Wall Street Journal, “The #MeToo Ambush of Kavanaugh,” as the editorial board deemed it in a smugly dismissive editorial Sept. 18.

Regardless, the accusation by Stanford professor Dr. Christine Blasey Ford that U.S. Supreme Court nominee Brett Kavanaugh had attempted to rape her when the two were in high school has upended the confirmation process.

The allegations made by Ford are shocking. What has happened since? Nearly as shocking.

It began in July, when Ford contacted her Congressperson, Rep. Anna Eshoo (D-Calif.), and Sen. Dianne Feinstein (D-Calif.), the ranking member of the Senate Judiciary Committee, via letter. In it, she detailed the attempted rape by Kavanaugh at a suburban Maryland party when she was 15 and he was 17.

According to Ford’s account, which she gave to the Washington Post, Kavanaugh shoved her into a room at a party and locked the door. With him, she said, was his friend, Mark Judge, now a conservative writer. She described them both as having been drunk.

Ford was pushed down and Kavanaugh got on top of her, she said, grinding his body against hers and clumsily attempting to pull off her one-piece bathing suit and the clothing she wore over it. Kavanaugh put his hand over her mouth when she screamed, Ford said.

“He was trying to attack me and remove my clothing,” she told the Post.

While this was happening, she added, Judge had turned up the music and was egging Kavanaugh on.

When Kavanaugh covered her mouth to muffle her screams, Ford said she thought he “might inadvertently kill me.”

She said she was able to escape when Judge jumped on her as well and they fell to the floor. She ran out and locked herself in a bathroom, then went home.

“I think it derailed me substantially for four or five years,” Ford recounted. She described the incident as a “rape attempt” during a therapy session in 2012, according to her therapist’s notes obtained by the Post.

“I categorically and unequivocally deny this allegation,” Kavanaugh said in a statement last week when news of the letter surfaced. “I did not do this back in high school or at any time.”

And yet Ford not only named him, but also his best friend at the time.

Ford told the Post she hadn’t wanted to identify herself publicly, but after details of her letter began to leak, she decided she wanted to be the one to tell her story.

Ford hired attorney Debra Katz after she decided to send the letter. On Katz’s advice, Ford took a polygraph test in August, which was administered by a former FBI agent. The test results showed conclusively that her relaying of the account was truthful.

Ford contacted the Washington Post via its tip line in July, but was initially hesitant to go public, fearing the impact on her family.

“Now I feel like my civic responsibility is outweighing my anguish and terror about retaliation,” Ford said about why she decided to go public.

In a statement Sept. 16, Feinstein said, “I support Mrs. Ford’s decision to share her story, and now that she has, it is in the hands of the FBI to conduct an investigation. This should happen before the Senate moves forward on this nominee.”

Feinstein added, “From the outset, I have believed these allegations were extremely serious and bear heavily on Judge Kavanaugh’s character. However, as we have seen over the past few days, they also come at a price for the victim. I hope the attacks and shaming of her will stop and this will be treated with the seriousness it deserves.”

But by Sept. 18, the attacks on Ford had gotten so extreme — including phone calls, hacking into her online accounts and threats to her life and that of her family — that she and her family were forced to leave their home, move to an undisclosed location and hire full-time security.

Initially refusing to respond to the allegations, Sen. Chuck Grassley (R-Iowa), who heads the Senate Judiciary Committee, scheduled hearings for Ford and Kavanaugh beginning next Monday — without asking Ford.

Later on Sept. 18, news broke that Ford would not appear for hearings until there was an FBI investigation.

President Trump has been uncharacteristically restrained in his response, telling reporters Sept. 17 that it was important Ford be heard and Kavanaugh’s confirmation go forward free of taint. He said he was not considering withdrawing Kavanaugh’s name from consideration, but Vanity Fair magazine reported Sept. 19 that Ivanka Trump, the president’s oldest daughter and a senior White House adviser, said her father should cut Kavanaugh loose.

Support for Ford and Kavanaugh has, predictably, broken along party lines.

Sen. Orrin Hatch (R-Utah), who sits on the Senate Judiciary Committee and is president pro tem of the Senate — and thus third in line for the presidency after the vice president and speaker of the House — told reporters Sept. 17 that he thought Ford was “mixed up,” and that even if Kavanaugh had committed rape, it wouldn’t influence his confirmation, which would be predicated on who he is now.

“If that was true, I think it would be hard for senators to not consider who the judge is today,” Hatch said.

Democratic female senators have come out strongly for Ford. Sen. Kirsten Gillibrand (D-N.Y.), who has led the Congressional fight for sexual-assault victims for over a decade, called Ford brave for speaking out. Sen. Kamala Harris (D-Calif.), who grilled Kavanaugh on LGBT issues as well as women’s rights during the hearings, also said she believes Ford. Sen. Mazie Hirono (D-HI) asked Kavanaugh during the hearings if he had ever sexually assaulted anyone and he answered no.

In a press conference Sept. 18, a frustrated Hirono told the press, “I just want to say to the men of this country: Just shut up and step up. Do the right thing for a change.”

After news of the threats against Ford and her request for an FBI investigation, Democrats rallied to call for the same, while Republicans balked.

Sen. Bob Corker (R-Tenn.) and Sen. Lindsey Graham (R-S.C.) have both told the press that if Ford doesn’t testify, the confirmation should just go through as planned. Corker said the Senate had “extended a hand” to Ford and if she chose not to take it, that was her choice.

Women’s groups like Planned Parenthood and NARAL have spoken strongly in support of Ford.

Rea Carey, executive director of the National LGBTQ Task Force Action Fund, said, “It took courage for Professor Christine Blasey Ford to publicly come forward with her accusations of physical and sexual assault at the hands of Supreme Court nominee Brett Kavanaugh and his friend Mark Judge. While the #MeToo movement has shed light on the high prevalence of sexual harassment and sexual-assault attacks, telling your story is never easy. The severe backlash that is already underway against Ford is a stark reminder of the treatment Professor Anita Hill endured almost 30 years ago.”

In a confusing aspect of the case, Mark Judge has said he doesn’t remember an incident like the one detailed by Ford. But in his memoir, he refers to a close friend, “Bart O’Kavanaugh,” who would get “blackout drunk” with him when they were at Georgetown Prep together. And MSNBC aired clips from speeches in which Kavanaugh himself referred to the hard-drinking days at Georgetown Prep.

Judge had also chosen a Noel Coward quote for his high-school yearbook page: “Certain women should be struck regularly, like gongs,” which seems a startling choice for an 18-year-old.

Judge was asked to testify on Kavanaugh’s behalf and to address the allegations, since Ford cited him as a participant. He has refused to do so.

Kavanaugh currently has a lifetime position as a federal judge on the Ninth Circuit Court of Appeals in Washington, D.C. These allegations must be addressed as he continues to hold sway in cases of sexual assault. Kavanaugh ruled in one such case, Garza v. Hargan, in 2017. Rochelle Garza, attorney for the Jane Doe immigrant rape victim in that case, testified against Kavanaugh on Sept. 14, the last day of the hearings.

Kavanaugh had ruled to prevent Garza’s client from getting an abortion at eight weeks, citing her age, 17, and that she was a minor. The abortion was delayed until the second trimester, thus causing much more pain and risk to her. Fewer than 10 percent of abortions are done at 20 weeks.

Garza said, “Constitutional law isn’t just this thing in the clouds above everything else. It actually has a direct effect on people.”