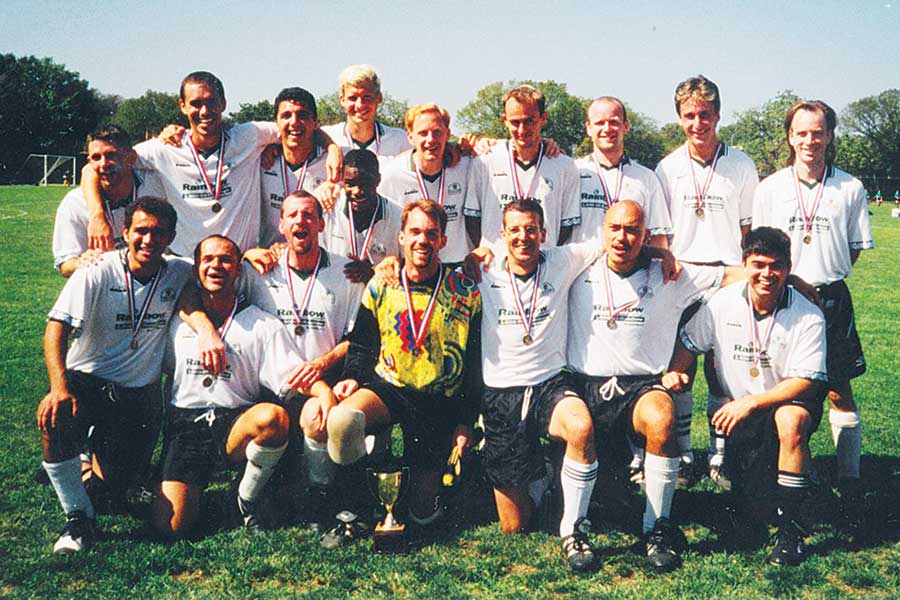 LGBT sports leagues abound in Philadelphia and one of the first to put it out there was the Philadelphia Falcons Soccer Club. Formed a couple of years after CBLSL had started taking off, the beginnings are fortunately still clear in many minds.

To span the decades, we’ve relied on the Falcons’ first president Drew Adair, current president Caitlin Daley and, for some of the in-between years, longtime participant Stephen Connolly. Thank you all for your contributions and enjoy this 30th anniversary year to the fullest.

Beginning with the origins, Drew Adair:

Back in June, 1989, after having played a few years in the softball and volleyball leagues, I began to give serious thought to my firm belief that there had to be, like me, more than a few gay soccer boys now finally out of high school and college, and finally OUT, in the Philly area.

So, how to get us all together? I looked up the New York Ramblers’ founder Bob Whitmore, and had several phone conversations on how to organize and advertise, what other teams were out there, and so forth. I hit my local Kinkos, contacted the Park Commission office about available fields, got some free ad/announcement space in Au Courant and PGN.

During the first week of July, I posted fliers at the usual hangouts and, along with a news release, and scheduled the first ever practice on an afternoon in mid-July at an open softball field somewhere in south Philly near 18th below South Street, I think. The very first person to call me was Adrian Paulus and I’m pretty sure that he was among the seven or eight guys who showed up that first day, which also included Chris Field, Andrew Neibauer and Bob “Murph” Murphy. Within a couple of weeks, we were able to secure a couple of hours once a week on the Drexel University field hockey green — mostly when the security guards were on break!

We moved forward with regular practices, got a few more guys, and a little more publicity. Of course, one of the biggest hurdles was juggling the soccer and softball schedules, since at least half of us played both. We also had to deal with seeing a few good players come and go quite quickly, as they soon realized that we were serious about joining leagues, and I think some were worried about being outed.

Bob Whitmore made sure we got the info about the tournament Boston was hosting in October of 1989 and the team’s name also came up around that same time. We had several meetings just for the purpose of naming the team. We chose the Falcons because it was butch, it was “Philly-ish,” it had lots of visual possibilities, and maybe best of all, it was also the name of the classiest man-porn studio on the planet! Hey, we ARE a gay team after all!

PGN: How many participated the first few years?
SC: When I joined in ’93, we had anywhere from five to 20 people at practice, twice a week.

PGN: Were there games or just practices and exercises?
SC: Practices, exercises and tournaments. In the ’90s, we played g&l (gay and lesbian) tournaments, straight leagues, indoor at Woodhaven Complex and outdoor leagues.  The International Gay & Lesbian Football Association (IGLFA) was founded in 1992 in order to help promote and foster the growth of LGTBQ football world wide. Since IGLFA’s creation, more than 100 teams/clubs representing over 30 countries have joined and participated at IGLFA competitions.

PGN: Where did people get together to play?
SC: At 26th street between Pine and Lombard streets — I think it was called the Schulykill River Park — and also at a grass area on River Fields Drive, which I believe was owned by UPenn.  It’s since been developed and is now Meiklejohn Stadium. The team now plays in Fairmount Park.

PGN: Who were early supporters and funders for equipment?
SC: Early on, Adrian Paulus who owned the liquor store Foodery at 10th and Lombard. There were others; but I can’t remember, probably Woodys.

PGN: Were there any early goals for the organization?
SC: Grow, increase membership and form a women’s team.

PGN: What sense of pride do you have seeing the development and evolution of the Falcons?
SC: Personally, I’ve been involved with the team since ’93. I’m proud of many things:

• That we formed a women’s team. Back in the ’90’s, we may have had a few women playing but, by 1999, we sent a women’s team to the IGLFA tournament in Fort Lauderdale.

• The First Pumpkin Patch tournament we held in Philadelphia in the late 90’s organized by myself, Mike Marsico and Mike Lemole, where we had 10 men’s team and 2 women’s teams and raised close to $7000. I need to acknowledge Mike Marsico as he helped tremendously with raising money for this tournament.

• That for many years, our team has had a large number of straight players. This started in the early ’90s and continues to be the case.

Where the Falcons are now, Caitlin Daley:

We average about 150 club members every year and our members represent a vast array of gender identities, sexual orientations, nationalities, and backgrounds. On traditional gender lines our membership is close to half men and half women though it varies year to year and it’s not infrequent to have more female members.

We run three or four seasonal leagues a year strictly for our members. We play indoor at Guerin Rec Center in the fall and winter, outdoor at Fairmount Park Athletic Fields in the spring and summer. We have indoor or outdoor pickup two to three times a week all year long.  We also have one men’s 11-vs.11 team that plays in the CASA league, and two women’s 11-vs.11 nteams that play in the Tri-County League, both in the spring and fall. We routinely send teams to travel to tournaments in Las Vegas, Albany, New York City, D.C. and Rehobeth, as well as to the Gay Games and the World Out Games. We also still host an annual tournament, now called the Liberty Bell Classic and it is played on OutFest weekend in the fall.

I like to think of the club as a place that caters to every soccer need. We span 40-year-olds who have never played before, hotshots in or right out of college who can compete at a very high level, and everything in between.

We adopted a new motto about two years ago of “Inclusive.Driven.Soccer” that I particularly love as it doesn’t matter if you read the words separately or together it speaks to the community we strive to create.

I personally cannot say thank you enough to Drew, Stephen, and the many other early founders and supporters of the club. When I first moved to Philly I struggled to find a way to make gay friends, to find a place that felt like a community. The Falcons quickly became that community and those friends once I joined. As president I try to make sure everyone can feel welcome here and perhaps find there community as well.

Additional information on the Falcons and how to become a member or where to go to watch a game or tournament can be found at Falcons-Soccer.org or on Facebook under Falconsoccer and you can follow them on Twitter under @falconsoccer.