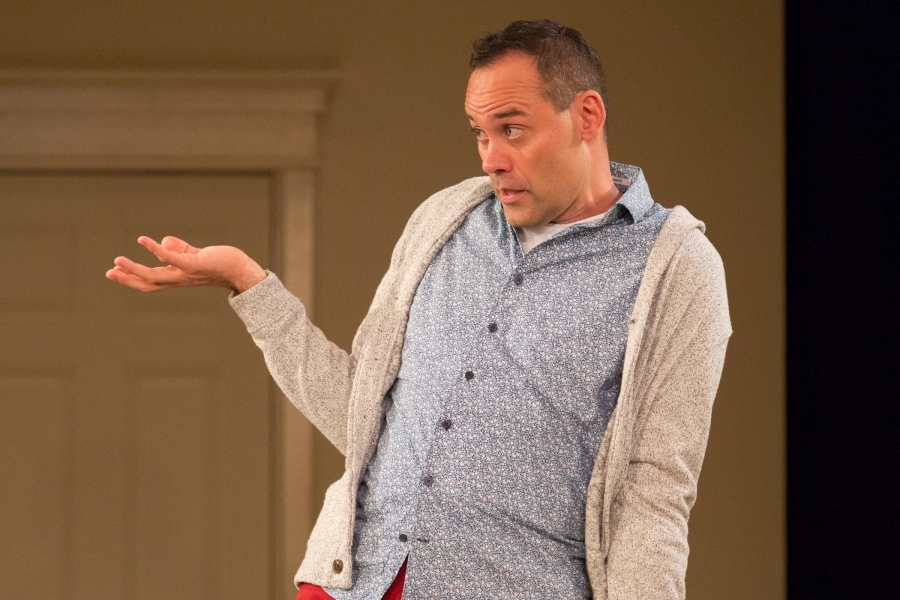 Some people have an unhealthy relationship with celebrity, allowing it to play an outsized role in one’s thoughts and life. In fact, for some gay men and their divas, the obsession can reach extreme levels. In real life, such a scenario can lead to — shall we say —  issues, a topic of classic comedy fodder.

In fact, Philadelphia’s all-comedy theater company, 1812 Productions, is presenting a new show that mines celebrity fixation to new depths — or heights, depending on how you look at it.

Alex More, the lead character in “Buyer & Cellar,” 1812’s new show currently playing at Plays & Players, is pre-occupied with Barbra Streisand. This doesn’t become obsessive until the unemployed actor is actually hired by Streisand to play shopkeeper to the private shopping mall she has constructed in the basement of her Malibu mansion. This is when Alex begins to ponder all aspects of Streisand’s life and celebrity. This also inevitably leads to Alex pondering what it all means and how it applies to his life, including the nascent friendship between himself and his idol/employer. Eventually, Alex must face his own Streisand-infused heart of darkness, and it’s an open question as to whether he will survive emotionally to emerge on the other side of the experience.

Playwright Jonathan Tolins is an old hand at writing funny on stage, having written for Bette Midler, the Oscars and the Tonys, as well as Broadway and several movies. His verbal skills are firing on all cylinders. In fact, this play is so chock-full of sharp, intelligent wit, as to be intimidating. Straight people come to plays like this and they come away with the impression that all gay people are this funny and witty all the time. Well, sometimes we are — but jeez marie, Tolins raises the comedic-wit bar awfully high for the rest of us to live up to.

As high as Tolins sets the  bar with his script, actor Dito van Reigersberg doubles down with a bravura performance. While Tolins has written a play with three main characters — Alex, his long-suffering lover Barry and Miss Streisand herself — van Reigersberg turns it into a commanding one-man performance. Van Reigersberg, also known in the community as drag cabaret artist Martha Graham Cracker, is a charming, charismatic performer who can command the stage alone easily, and who can handle the difficult task of simultaneously playing funny and poignant.

Director Dan O’Neil has staged the proceedings with a deft touch, finding just the right tone and pace.

Fans of La Streisand need have no fear that the laughs are at her expense. If the jokes about the shallowness of celebrity, obsessive acquisition and fixation on work are barbed, they are gentle, loving barbs not intending to puncture the woman, but the myth. If only more hilarious satires had so much heart.