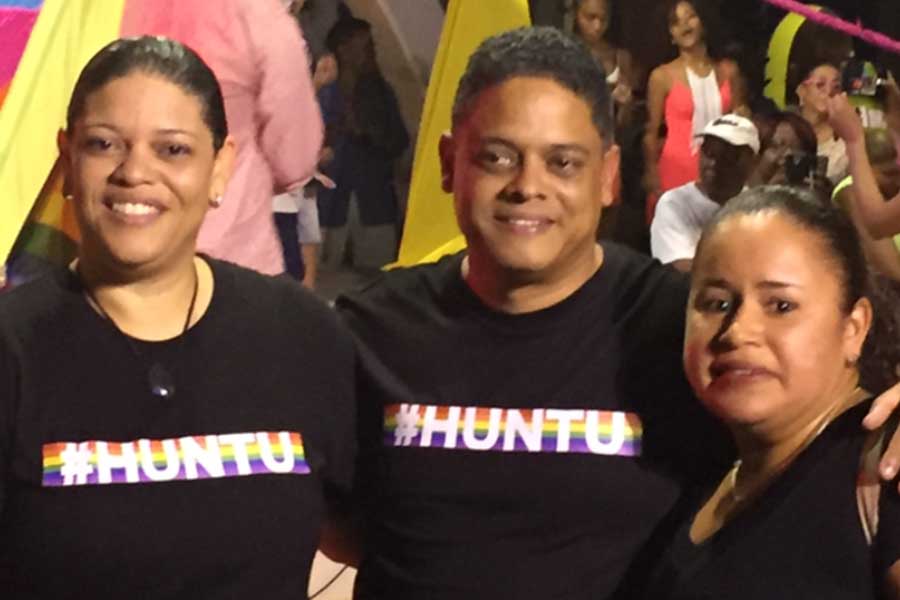 The prime minister of Curaçao, Eugene Rhuggenaath, opened the fifth anniversary of Curaçao Pride by citing key phrases of the Declaration of Independence to announce his support for LGBT equality in his country. The prime minister’s remarks come at the same time that equality-rights activists here are working on potentially groundbreaking new LGBT legislation, which is expected to be introduced in Parliament before the end of the year as part of a pathway to equality for all citizens.

Rhuggenaath acknowledged that his attendance at Curaçao Pride “was not positively received by all people in our community.” The prime minister was wearing a shirt with the word “#HUNTU,” meaning together, and appeared with his sister, who is a lesbian.

In an interview with PGN, the only LGBT U.S. media at the event, about why he chose the Declaration of Independence as the cornerstone of his speech and position, he said, “It is inspiring.”

“As I profoundly reflect on why I choose to be here today, the answer to this question comes to a simple and all-encompassing phrase: All humans are born free and equal in dignity and rights,” he said. “The universal declaration of human rights. I also draw inspiration from the U.S. Declaration of Independence.”

He continued, “We hold these truths to be sacred and undeniable that all men are created equal and independent and from all that equal creation they derive rights inherent and unalienable, upon which are the perseveration of life, liberty and the pursuit of happiness.”

Rhuggenaath went on to say that he is the prime minister for all people.

Joining the leader were other members of Parliament, including Giselle M. McWilliam, vice president of the Parliament of Curaçao. McWilliam has emerged as one of the leading new voices of LGBT equality in Curaçao after her election in November. Also in attendance, but not speaking, were other representatives of the U.S. Consulate.

With rainbow flags adorning the famous Queen Emma Bridge, Curaçao Pride has ignited a controversial debate reported by the local media. The controversy centered on the island’s Pride celebration and at least one member of Parliament’s questions about the urgency of new LGBT-equality laws. For the first time, Curaçao Pride coincides with Curaçao Culture Week, which the tourism office confirmed is traditionally held the week before Pride.

Curaçao, a small Caribbean island nation off the coast of Venezuela, is widely known as a beacon of LGBT human rights in the Caribbean, drawing thousands of local, regional and international tourists to four days of Pride events held last week. Eighty percent of the island’s population is Roman Catholic.

Jeff Guaracino is the author of “The Handbook of LGBT Tourism and Hospitality: A Guide for Business Practice.”