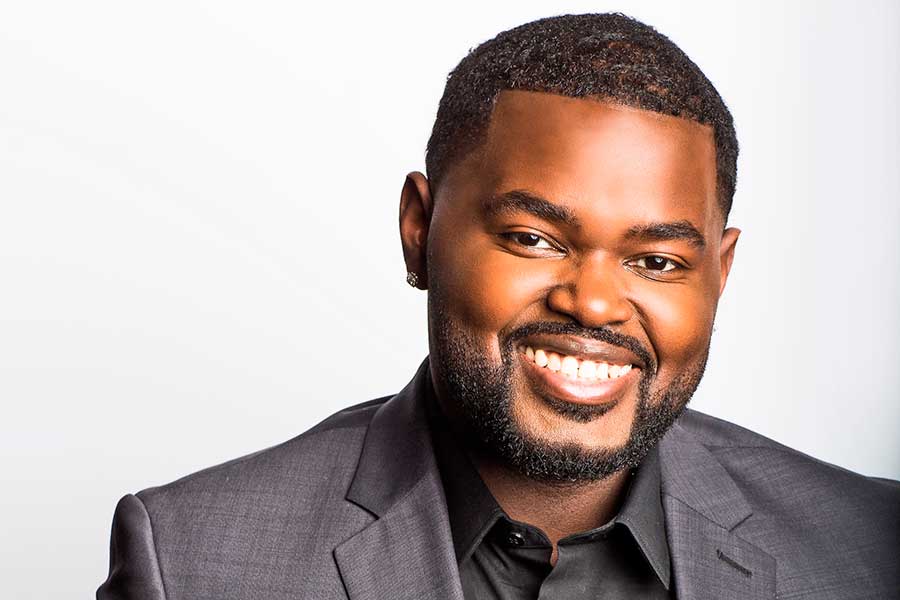 It would be an understatement to say that David B. Devan, the bow-tied general director and president of Opera Philadelphia, is over the moon about O17, the organization’s debut festival. With seven “operatic happenings” staged Sept. 14-23 in six venues, this is not only a genius marketing opportunity that brings international press to our city, it is also rich with innovation: operas in unique spaces (“The Wake World,” “War Stories”), those that copy a movie-going experience (“The Magic Flute”) and those relevant to Philly (“Elizabeth Cree,” “We Shall Not Be Moved”).

It is that last chamber opera by composer Daniel Bernard Roumain, librettist Marc Bamuthi Joseph and director-choreographer Bill T. Jones that touches upon this city’s incendiary MOVE tragedy of 1985, and that brought young Texan countertenor John Holiday to O17.

Grammy-nominated for Philip Glass’ “Galileo Galilei” and renowned for his work with the Portland Opera, Holiday is as close to a new-school opera star as the genre allows.

PGN: How did you get into opera in the first place, as you started in sacred music?

JH: My mother and grandmother both have that gospel background, with my grandmother also being the music minister at her local church. She and her sisters were teachers and they’d have their Friday-night get-togethers with friends where they played cards and listened to jazz and rhythm and blues. By the second grade, I was in the Boys Choir of Texas where I had the opportunity be exposed to the phenomenal mezzo-soprano Denyce Graves singing Faust, where I wound up as one of the soloists. Meeting and hearing her, I realized what I wanted to do, because I had never seen another African-American opera singer. Through her, I realized opera was within the realm of possibility.

JH: David Devan was workshopping this, and apparently more parts were written, one of which he thought I’d be perfect for, as he knew my work. He YouTubed my performances for the creative team, and the next thing you know, I got a call from Bill T. Jones. I was scared to speak with him, but after his urging — and it didn’t take much — I made a move to do this show, a move I will never forget.

PGN: There’s a lot of movement and dance in the show. Are you cool with that?

JH: I have fallen in love with Bill T. Jones’ rehearsal process. It’s rigorous but rewarding. What’s awesome about all that moving and dancing is that it is a challenge as I’ve never had to do that before. I’m lying on the floor, doing dance things. There is a certain amount of vulnerability that we must take on to do what is required of us here. I didn’t know that I could do the things that I’m doing in this show, and wouldn’t have otherwise, and no other opera would require this of me.

PGN: “We Shall Not Be Moved” is by no means an opera about the grassroots MOVE organization or its activism, but it is a major aspect of the show. As you’ve never been to Philadelphia before this, what did you know about MOVE?

JH: Before the workshops? Nothing. Since that time, however, I have visited Osage Avenue and spoken with the block captains. I took pictures in front of the space that was bombed. There is an energy that still exists there … a sad, incredibly moving energy. I was born March 31, 1985. The bombing happened in 1985 so I very well could have been one of those kids in that house. That made the opera more poignant and real. I could inject more of what I was feeling.

PGN: You are a gay countertenor playing a trans character. What can you tell me about “John Blue”?

JH: Well, I had to shave so that’s the first part of my transformation. Blue is 16-year-old female-to-male transgender human being living in Philly. Blue’s journey goes on from the beginning of the opera, and is the very center of one huge element I can’t tell you about because I want you to see it. Blue is someone who his brothers lean upon and must play to aspects of vulnerability, confusion and discontentment.

PGN: Can you relate to John Blue at all?

JH: That’s tough. Blue goes through so many changes. Let me say this: There are times when I thought that my decision to come out could’ve caused pain. Luckily, I have a family who has been mostly supportive and I certainly have a husband who is totally supportive. I live a life where I don’t have to worry about the things Blue does, but I understand having joys, triumphs and difficulties. I just hope I can show the audience all the facets of such a multifaceted character from every angle.