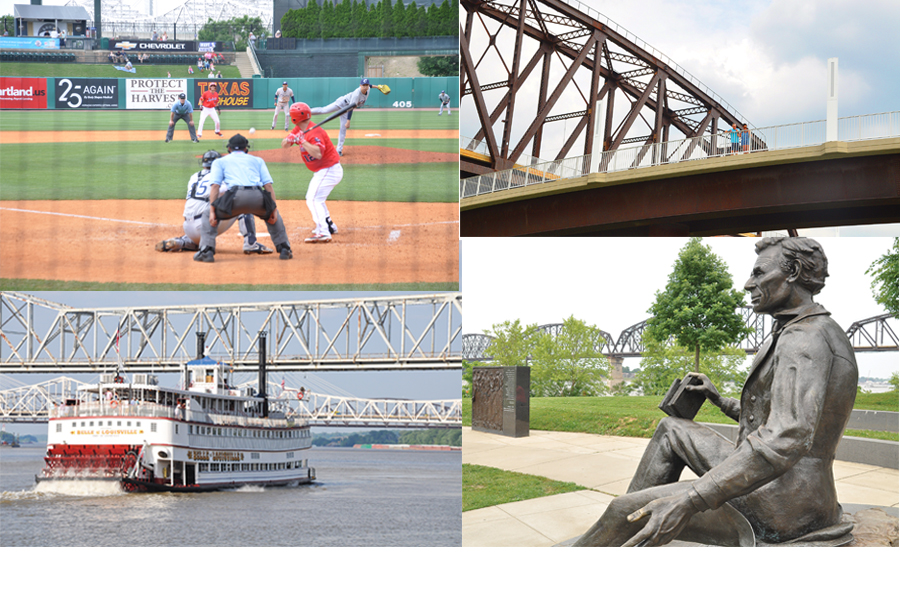 The Ohio River is a key component to not only current livability, but it was crucial to the establishment of Louisville. The city was founded by George Rogers Clark, fellow explorer of Meriwether Lewis and, in fact, Clark is buried in Cave Hill Cemetery in Louisville (as is Colonel Harland Sanders).

Clark established a settlement along the Ohio River where the rapids were forcing people off the river to forge around and reenter further south. Evan Williams was also an early settler near the river and his distillery was so popular that the street past his place was commonly known as Whiskey Row. In fact, whiskey and bourbon were fairly common alternate forms of currency.

The river today has two riverboats for lunch and dinner cruises: the Belle of Louisville and her little sister, the Spirit of Jefferson. Each is often used for private parties, but excursions on the river are frequent enough that it’s not difficult to catch a ride.

Also riverfront is a Lincoln Memorial. A large, family-friendly and very photogenic statue, it’s a common spot for sitting or taking selfies. Don’t forget that Honest Abe was born in Kentucky just south of Louisville, and a National Park Service memorial is located there now.

Walkways crisscross the waterfront, offering numerous sitting spots and vantage points. Be on the lookout for occasional festivals and concerts held in the area. It’s also a popular spot for the Derby week kickoff, “Thunder Over Louisville.”

The Big Four Bridge spans the Ohio River near there and is one of the most popular spots for walking, biking, running and just hanging out for locals and visitors alike. It’s an old railway bridge that’s been converted into a purely recreational bridge with panoramic views of both Louisville and historic downtown Jeffersonville, Ind. The Big Four refers to the railroads that used it originally: the Cleveland, Cincinnati, Chicago and St. Louis lines.

Louisville Slugger Field is a waterfront baseball park just off the river and is home to the Cincinnati Reds Triple-A club the Louisville Bats. As with many minor-league teams, the tickets are cheap, the food is fairly inexpensive and the seats are all great. They play games against our Phillies Triple-A affiliate Lehigh Valley Iron Pigs.

And finally, for a most spectacular view of the river and city, head to Rivue Restaurant Lounge in the Galt House. The 25th-floor restaurant and bar is an excellent place to wind down a day with drinks and/or dinner and catch a sunset while cruising in one of its two revolving restaurants.