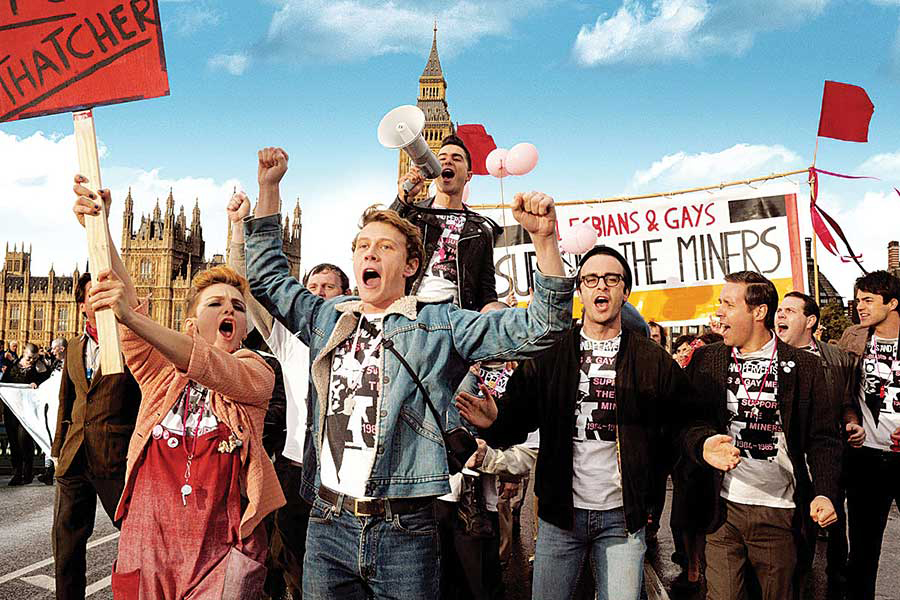 June is Pride Month and The PFS Roxy is celebrating by showing a number of LGBT titles.

Through June 13, moviegoers have the chance to see the fantastic, feel-good British film “Pride,” which chronicles the efforts of an LBGT group in 1984 to raise money to support striking Welsh miners. This rousing comedy-drama, based on a true story, shows the power of activism and how the LGBT community found solidarity with — and rallied to support — another oppressed group in Thatcher’s England.

The film, directed by Matthew Warchus and written by Stephen Beresford, has Joe (George MacKay), a closeted 20-year-old student who lives at home, asked by Mike (Joseph Gilgun) to help hold a banner at a gay Pride parade. Joe soon finds a makeshift family with Mike and a ragtag group of queer activists including Mark (Ben Schnetzer), Steph (Faye Marsay), Jonathan (Dominic West) and Gethin (Andrew Scott), who form the group Lesbians and Gays Support the Miners (LGSM).

“Pride” shows, in slick, inspirational-movie fashion, how the LGSM educated the miners and their wives. The bonding of these very different communities illustrates a unity that is heartfelt. There is something undeniably endearing about this story of people becoming empowered. In fact, viewers may find themselves fighting back tears during some of “Pride,” which gets increasingly more emotional as it marches to its climactic gay Pride parade.

On June 15, 18-19 viewers get the opportunity to see the late Robin Williams as the cross-dressing title character of “Mrs. Doubtfire.” This broad, but at times very funny, comedy has Daniel Hillard (Williams), an actor and a divorced dad, enlisting the help of his gay makeup artist brother Frank (Harvey Fierstein) to help him transform into a British nanny (a terrific comic scene). The reason for Daniel’s subterfuge is that he wants to spend time with his children who are living with his ex-wife, Miranda (Sally Field). The film is best when Williams cuts loose and does some amusing ad-libbing, especially when it involves physical comedy. The actor’s energetic performance helps balance the plot contrivances that develop when Miranda’s new boyfriend, Stu (Pierce Brosnan), is introduced.

“Gayby Baby” is Maya Newell’s engaging, observational documentary, which has its Philadelphia premiere June 16-20. The film follows four Australian pre-teens who have same-sex-couple parents: Gus lives with his two mothers, and loves WWE wrestling, much to his parents’ chagrin. Ebony wants to be a singer and attend a performing-arts high school, but her two mothers are distracted by car trouble and their son who may have epilepsy. Matt, 12, has some conflicts with his mother, who is very religious; he doesn’t believe in God, in part because the Bible says LGBT people are sinners. Lastly, Graham is moving to Fiji with his two adoptive dads. Graham has trouble reading, which is becoming more of a problem as he enters a new school.

“Gayby Baby” shows how the four pairs of same-sex parents navigate the pleasures and pressures of raising children. There are disciplinary matters that arise when Gus roughhouses too much, or when Matt is being selfish. Graham’s efforts to do his schoolwork are contrasted with Ebony’s nerves about performing. The film also showcases some political issues. Graham’s dads don’t want him to disclose their relationship in Fiji, a less tolerant society. Meanwhile, Matt and his two moms get the opportunity to meet with the Australian prime minister to discuss the topic of marriage equality.

Ultimately, “Gayby Baby” dispels any myth that same-sex parents are not suited to raise children. What emerges in these four very different portraits of family is the love and care the parents have for their kids (biological or adopted) and the pride they have in raising them.

Not to be missed is “Valentine Road,” playing June 23-28. This devastating documentary — guaranteed to outrage viewers — recounts the tragic, senseless 2008 death of Larry King, a 15-year-old Oxnard, Calif., student who was killed by his homophobic classmate Brandon McInerney. Larry wore heels and makeup to school, and asked Brandon to be his valentine. These factors may have led Brandon to shoot Larry twice in the head during their first-period class. As the film recounts the shocking crime, director Martha Cunningham investigates bullying and the treatment of trans teenagers, but also shows the flip side: that some folks think Brandon is the victim here.

“Valentine Road” is heartbreaking as it depicts the subsequent trial and reactions to the case. Cunningham addresses debates surrounding juvenile justice, and if Brandon should be tried as an adult. Nevertheless, this remarkable film deserves to be seen for shedding light on how hate crimes are sometimes treated and tried.