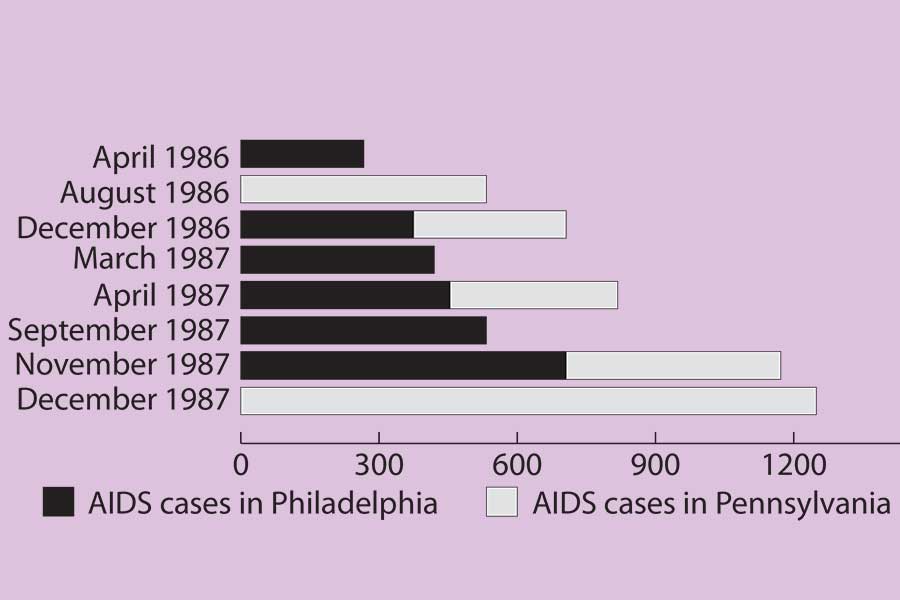 •       On June 5, 1981, the Centers for Disease Control issues a warning about pneumocystis carinii, a rare form of pneumonia, after five gay men in Los Angeles contract the disease.

•       In the fall of 1981, the newly formed Philadelphia Physicians for Human Rights meets with the Philadelphia Health Department about the growing disease impacting gay men.

•       In 1982, Dr. John Hanrahan of the Centers for Disease Control’s Task Force on Kaposi’s Sarcoma and Opportunistic Infections travels to Philadelphia to interview two men for a study on the new “gay cancer.”

•       The term Acquired Immune Deficiency Syndrome is used publicly for the first time on July 27, 1982, during a community meeting in Washington, D.C.

•       In 1983, the Food and Drug Administration issues a blanket ban on blood donation by men who have had sex with men.

•       Philadelphia appoints its first Coordinator for Issues Relating to AIDS, Muriel Bell, in the spring of 1983.

•       The first International AIDS Conference is held in Atlanta in April 1985.

•       On April 1, 1987, President Ronald Reagan delivers a speech at the College of Physicians in Philadelphia in which he calls AIDS “public-health enemy number-one” and urges youth to remain abstinent.

•       ACT Up Philadelphia holds its first demonstration Sept. 13, 1987, outside the Liberty Bell to call for increased local funding for AIDS.

•       The Pennsylvania Department of Health establishes an AIDS Unit in September 1988.

•       David Acosta and other local activists start Our Living Legacy in 1988 at Painted Bride Art Festival to showcase AIDS-related work.

•       Eighteen-year-old Ryan White dies of AIDS in Indiana on April 8, 1990. Congress went on to pass legislation in his name that continues to fund the largest amount of HIV/AIDS services in the nation.

•       About 75 members of ACT UP Philly interrupt Pennsylvania Gov. Bob Casey’s inauguration on Jan. 15, 1991, to call for enhanced attention to AIDS issues.

•       On July 27, 1992, Philadelphia Mayor Ed Rendell formally authorizes a needle-exchange program that had been operating underground.

•       In June 1995, the FDA approves the first protease inhibitor for antiretroviral treatment.

•       In December 1995, the Rite Aid corporation agrees not to release HIV-prescription information to patient employers in Pennsylvania after a local lawsuit.

•       The largest-ever clinical trial for a therapeutic AIDS vaccine begins March 18, 1996, at Graduate Hospital in Philadelphia.

•       The United Nations General Assembly creates the Global Fund in June 2001 to combat the spread of HIV throughout the globe.

•       A 2008 national study finds Philadelphians are being infected with HIV at a rate five times the national average.

•       After 22 years, the ban on HIV-positive individuals entering the United States is lifted in January 2010.

•       A September 2010 report from the CDC finds that about 70 percent of men who have sex with men in Philadelphia are unaware of their HIV status.

•       The FDA approves pre-exposure prophylaxis in July 2012 as a new means of HIV prevention. n