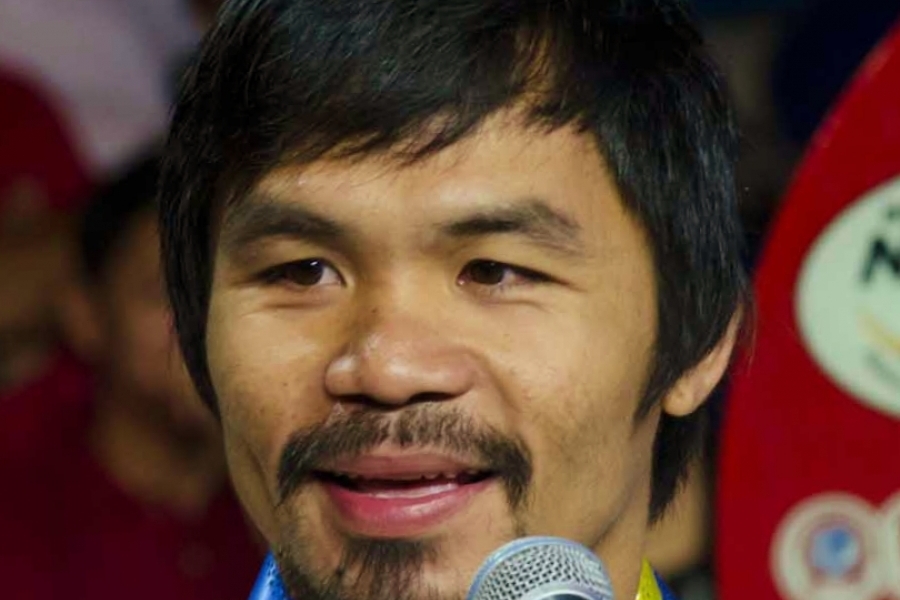 Let’s pretend that it’s your job to get punched in the head over and over and over again by muscular men who train for hours every day with the specific goal of hitting you harder. Granted, you also hit these men in the head, but that doesn’t change the fact that getting punched is your job. And you do this for years.

It might not surprise the people around you if, after a while, you started saying really stupid shit.

Which leads us to professional boxer and Philippine Senate candidate Manny Pacquiao.

Last month during a debate televised by Filipino station TV5, Pacquiao and other Senate candidates were asked about their views on same-sex marriage, which is illegal in the Philippines. Pacquiao’s answer was clearly the result of being punched in the head too many times.

“It’s just common sense,” he said. “Do you see animals mating with the same sex? If you have male-to-male or female-to-female [relationships], then people are worse than animals.”

It is not, as Pacquiao claims, “common sense.” What is common, however, is the well-documented instances of animals other than humans getting, as scientists put it, “gay up in this bitch.” Pacquiao might want to add Bruce Bagemihl’s 1999 book “Biological Exuberance: Animal Homosexuality and Natural Diversity” to his reading list (that is, if he can still read after being used as a human punching bag for years). Bagemihl includes a multitude of examples of same-sex pairings across many species.

Pacquiao faced some pretty steep consequences for his “worse than animals” comment. Nike dropped him. He also lost his nuts. Or, more specifically, Wonderful Pistachios quickly distanced itself from Pacquiao, even though he was in a TV ad for them in 2012.

He was also punched in the head (figuratively) by actor, pro wrestler and human brick wall Dave Bautista, who called Pacquiao a “fucking idiot.”

“My mom happens to be a lesbian so I don’t fucking take that shit,” Bautista told TMZ Sports. “I don’t think it’s funny … If anyone called my mother an animal I’d stick my foot in his ass.”

Asked if an apology from Pacquiao would help, Bautista said no. “You can’t come back from that, man. There’s no coming back from that.”

“I still look up to him as a fighter,” Bautista said. “But as far as his opinions, he can stick that shit up his ass.”

Pacquiao did apologize, for what it’s worth. And it’s not worth much. He posted an apology on social media.

“Please forgive me for those who I’ve hurt,” he said. “But this does not change my position against same-sex marriage. That’s what I believe. My only mistake is comparing gay people to animals.”

Does Pacquiao have a right to his own opinion? Of course he does. But he doesn’t have a right to his own facts. The comparison of gay and lesbian people to animals isn’t just offensive because it’s crude, it’s offensive because the “homosexuality isn’t found in nature, so being gay is just a sick choice” argument is 100-percent bullshit. This idea that people could just as easily choose to be heterosexual if they weren’t so hot for pervert sex has led to so much unnecessary harm for LGBT people.

So I’m with Bautista about where Pacquiao can go stick his apology.