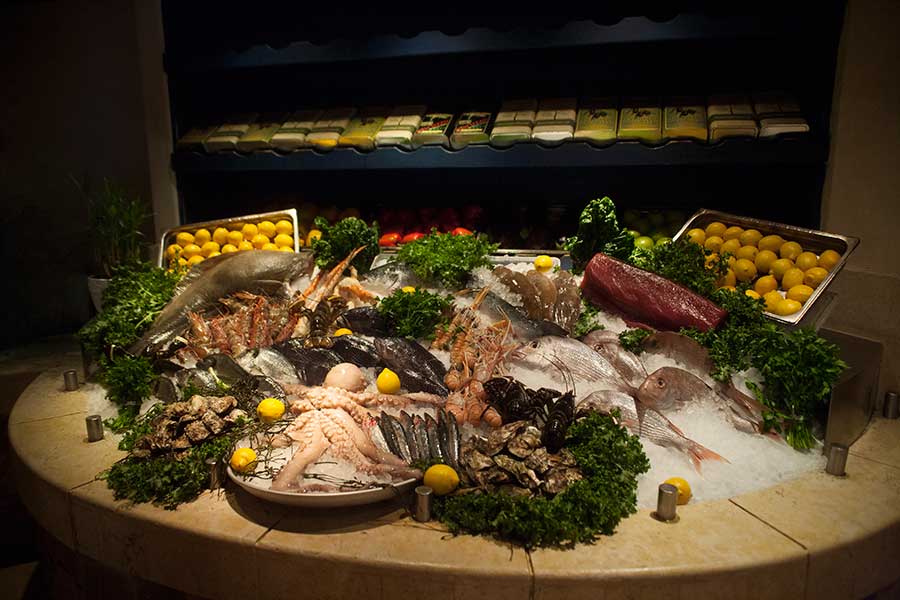 Upscale Greek restaurant Estia, 1405 Locust St., really goes the distance when trying to transport diners to the Mediterranean tranquility of the Greek islands, thanks in part to the dimly lit and ornate museum-like atmosphere of the spacious restaurant and the attentive waitstaff. The menu is equally meticulous.

Estia’s menu is refreshing in that it has no interest in finessing traditional Greek fare to conform with Americanized tastes and sensibilities. Simple, clean and uncomplicated flavors are the modus operandi, which leaves little margin for error when all you have to hide behind is lemon juice, salt and olive oil. But they make it work.

Things start out simply enough with the Estia Chips ($18), a generous stack of thinly sliced zucchini and eggplant fried perfectly to the consistency of gourmet potato chips. They are great on their own and even better with the creamy tzatziki. If you substituted these for potato chips at your next Super Bowl party, they would disappear in record time.

The stuffed calamari ($16) is effective and Spartan as well. Stuffed with three different Greek cheeses, the calamari is roasted tender and rests on a bed of spinach and olive oil.

The fried Greek potatoes ($8) had a nice crunch to them and were covered in cheese, but had our Americanized taste buds somewhat longing for some kind of condiment or salty reinforcements. Otherwise, they hit the spot.

Given the Mediterranean menu, fish is prominently featured, either fileted and served up with regional ingredients or dished out whole with oregano and capers. Whole fish can be prepared salt-encrusted upon request. We had the Royal Dorado ($28/lb.), a light, flaky fish that was moist and once again expertly prepared with olive oil and lemon juice.

If you are looking for aggressively spiced and seasoned fare, you might want to dine elsewhere. But if you want some of the best fresh seafood you can get in the city prepared simply, cleanly and in a no-nonsense fashion, put on your best casual seaside clothes and take a trip to Estia.