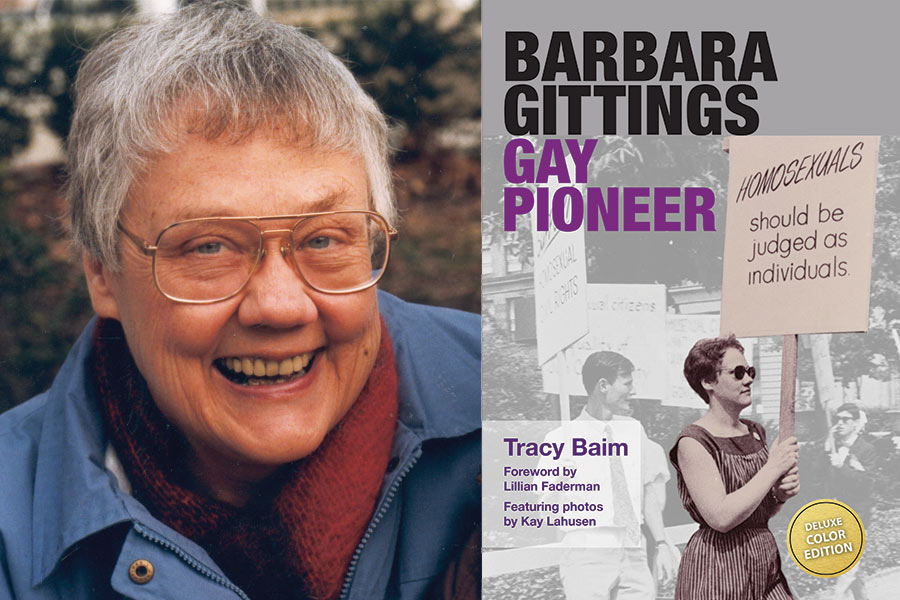 A new biography is finally shining an extensive light on the life of local longtime LGBT activist Barbara Gittings.

Written by journalist Tracy Baim, who has authored 11 books on LGBT history, “Barbara Gittings: Gay Pioneer” is the first full-length biography about the woman whom many have called the mother of the gay-rights movement. It covers the early days of the movement, starting in the 1950s, until her death in 2007. Gittings’ life partner Kay Lahusen photographed many of the movement’s biggest actions during the 1960s, and more than 270 of her photos are featured in the biography.

Baim said her 30 years of experience covering the LGBT community as a journalist and author helped greatly when Lahusen was looking for a writer to pen Gittings’ biography.

“Because I know where all the information is buried, it takes me much less time than someone starting from scratch,” Baim said. “While Barbara was alive, they had always wanted to do some kind of book about all their years of work. So Kay was trying to see if there was someone who could take this on. We had been in communication for about a year and I met with her early last fall and we confirmed that I would take on the project.”

Baim said that, even with her extensive background writing about LGBT issues, she was somewhat surprised at how much information she came across in researching for the book.

“Absolutely the breadth and the depth of it was incredible to me,” she said. “I had known about her American Psychiatric Association work and certainly that she had done a lot of speaking around the country in her last couple of decades. But I hadn’t realized much of the 1960s movement pivoted around the work of her and Frank Kameny because they were really a couple of the first people to take their work to a national stage.”

While Baim acknowledged that early pioneers were active locally in places like Los Angeles, Chicago and New York, Kameny’s and Gittings’ efforts had far-reaching effects.

“She was just in all the pivotal places, almost Forrest Gump-like, across the country and that made her and Kameny unique among a lot of the other people that were working on LGBT rights,” Baim said. “Delving into all the work in the 1960s was like peeling an onion, like her work with Kameny on legal cases of people challenging federal-government discrimination. The two of them — even though she wasn’t a lawyer and he wasn’t either — were very helpful to a lot of the cases of individuals who were taking on the government. Their work in this area led to changes in federal government policy on hiring homosexuals. I didn’t realize how integral she had been to all the legal behind-the-scenes stuff as well as all the pickets in front of the camera.”

We asked Baim why, given Gittings’ instrumental role in the history of the movement, she isn’t recognized on a more national level as a pioneer.

“One easy answer is sexism. I would also say sometimes of our movement, who do we really remember from that era? We remember very few people from that era,” she said, noting that Kameny may have garnered more media attention than Gittings because he was based in Washington, D.C., and she was in Philadelphia and Delaware — although Baim noted she was also active in D.C. and New York.

On a larger scale, she said, the work of pioneers such as Gittings is often missing from history books.

“I think it’s more the overall loss of our history. It’s not taught in our high schools. People don’t take a lot of history [courses] in college and if they do, they don’t get a lot of our history,” Baim said. “So I’m hoping that this book will be a small piece of the puzzle in rectifying that. You really have to be someone who is in search of this truth to find it. There are hundreds of films and books where you can find this history, but it’s not all in one place easily unless you are looking for it.”