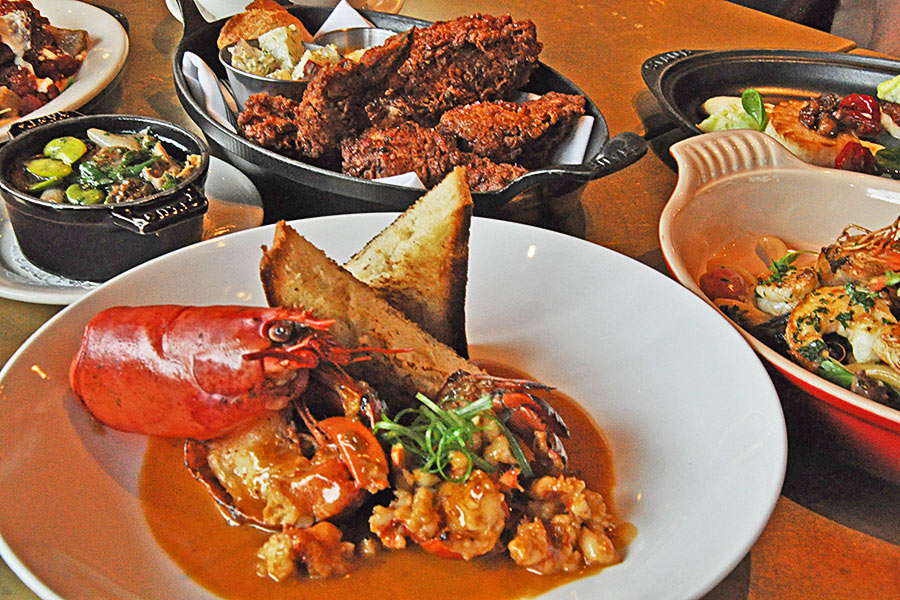 Star chef Kevin Sbraga made a splash with his first two Philadelphia restaurants, the elegant Sbraga and the more down-to-earth The Fat Ham, over the last few years. And his winning streak continues with his latest venture, Juniper Commons, 521 S. Broad St.

Sitting at street level with a panoramic view of Broad Street foot traffic, the new restaurant exists somewhere between the fancy, high-concept offerings of Sbraga and the more laid-back, casual paces of The Fat Ham. It also is infatuated with the 1980s in a way that is immediately charming and fun without coming across as campy. It’s more “Dynasty” and “Miami Vice” than Rubik’s Cubes and Nintendo.

The décor in punctuated with throwback amber-colored ashtrays (yes, kids … back in the day, you could smoke in restaurants) repurposed as candleholders. The sound system pumps nonstop 1980s-era new wave and alternative hits (Depeche Mode, Til’ Tuesday, Prince, etc.). The television at the bar was playing an ’80s James Bond movie and the bar itself offers a plethora of different gins. In an age with enough different flavors of vodkas to fill three aisles at the liquor store, it’s refreshing to see 100 types of gin in one place and an extensive and diverse menu of drinks featuring them.

Oh, and there’s a classic Farrah Fawcett poster in the men’s room.

Yeah, they aren’t messing around.

The menu takes staples from what were all the rage in the 1980s and gives them inventive modern-day spins.

Starters like the fried smelts ($8) came across like a grownup take on fish sticks that were tasty, tender and refined. The backed clams ($12) were made especially bold, generously sprinkled with finely chopped onions, bacon, pecorino and croutons. The beef fat fries ($8) are easily one of the best plate of fries you can get in the city.

The entrees at Juniper Commons go from strength to strength. Kevin Sbraga has always done a bang-up job on fried chicken ($26) at his other restaurants and it’s a standout dish here as well, with the perfect balance of crispiness and flavor. The eggplant fritters ($16) take the idea of eggplant Parmesan and streamline it into an experience not unlike the best mozzarella sticks you’ve ever had.

Both the garlic shrimp ($24) and the Maine lobster ($30) had familiar flavors but also had some surprising flourishes that elevated them. The lobster had a decadently flavorful cognac cream sauce heating up the classy feel of the dish. The garlic shrimp had a wonderful bed of gemelli pasta that was every bit as good as the star of the dish.

Sbraga has achieved a culinary trifecta with Juniper Commons. If he keeps going at this pace, he’s definitely going to give Jose Garces a run for his money when it comes to dominating the city with impressive restaurants.