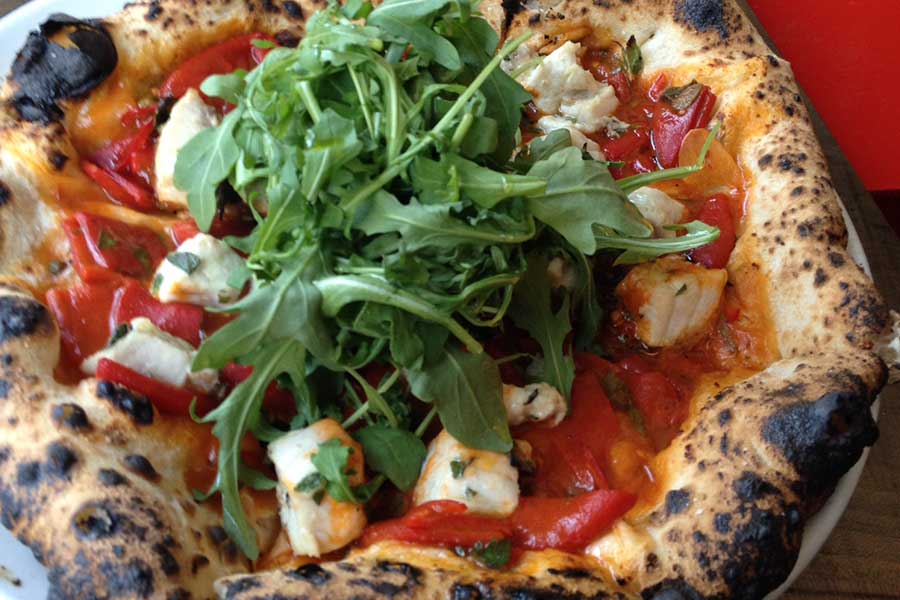 With its somewhat-Spartan and sometimes low-key aesthetic, at first glance you might think Bufad Pizza, 1240 Spring Garden St., is just another place to grab a piece of gourmet wood-fired pizza. But there is also some surprisingly nice, refined dining to be found.

There’s no better example of the adventurous nature of Bufad’s menu than its antipasti plate ($13), a family-style plate of local seasonal bites that reflects whatever catches the kitchen’s fancy.

When we visited, this menagerie included a potato and picked apple salad (which they would really make a mint on if they started selling in bulk. It’s about to be cookout season, please get on that), a salty egg, chicken liver crostini, farro and herb salad and pecorino toscano. The egg, comfortably somewhere between soft- and hard-boiled, was wonderfully briny thanks to a sliver of anchovy topping it. The chicken liver crostini was silky and rich with the sweetness of a balsamic reduction.

On the small-plate menu, the burrata ($12) stood out, with a complex array of textures and flavors that somehow found a way to work together. The crunch of the sautéed asparagus and the roasted pine nuts counterbalanced the creaminess of the mozzarella, the spiciness of the chili oil, the sweetness of the raisins and the acidity of the lemon juice. We don’t know why it works visually and flavor-wise, but we’re so glad it does.

But at the end of the day, Bufad is a pizzeria and its pies are works of art. We sidestepped the traditional pies and headed straight for the special of the day, an albacore tuna pizza ($15) with peperonata and arugula, which was pleasantly spicy with a Mediterranean feel. The crust was perfection and the chili oil and anchovy bread crumbs Bufad offers as condiments are a nice touch.

Bufad also has a brilliant dessert menu featuring some tempting baked fare, as well as homemade ice cream. We highly recommend the apple cinnamon ice cream, which is as close to eating apple pie as you can get, only in ice-cream form.

Whether you are there to grab a quick slice on the go or to sit down for a nice meal, Bufad has an impressively effective menu that is well worth the trip.